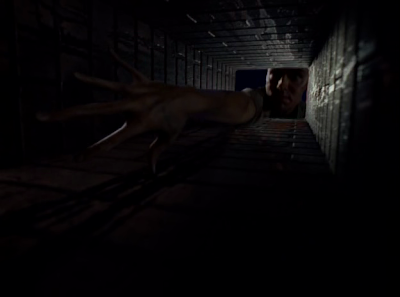 On the trail of a killer, Mulder and Scully find, in an abandoned building, a giant nest made of old newspaper scraps and bound together by some kind of fluid that Mulder reaches out and touches.

MULDER: Is there any way I can get it off my fingers without betraying my cool exterior?

For the most part, episodes of The X-Files can be grouped into three categories. The first two episodes, the pilot and "Deep Throat", were also the first two episodes in the "Mytharc" category. That's short for "mythology arc", and it is those episodes which tell the serialized story that takes place over the entire run of the series. One of the other two categories hasn't shown up yet, and I'm not sure when its first appearance is, so we'll hold that one – which I call "Creepy Comedies" – in abeyance. The third category, though, makes its first appearance here, in the third episode of the series. These are the "Monster of the Week" episodes: self-contained stories that don't advance the overall storyline of the show, but instead pit Mulder and Scully against...well, monsters. You can't have a SF/horror show without monsters, can you?

Now, I should point out that those categories aren't hard-and-fast; there are "Monster of the Week" episodes that are also "Creepy Comedies", and there are overlaps the other way as well. The categories would become more clearly marked in later seasons, when the big Mytharc episodes would be saved for the beginning and ends of the season and the sweeps periods in between, with everything else mostly being MotW's or CC's. In the first few seasons, however, things were much more of a free-for-all. (I tend to think that's one reason why the show's mytharc in general became harder and harder to follow, but we'll address that as we go, I suppose.)

"Squeeze" introduces us to a particularly nasty killer whose MO is to somehow enter dwellings or offices, violently murder the occupant and rip out their liver, and then depart again without leaving any trace of entrance or exit. That is, any normal trace of entrance or exit. He's got to get in and out somehow, and Agent Mulder will be the one to figure it out, much to the chagrin of fellow FBI agents who view him as a total crackpot who isn't even worth having around on standard investigations (which this turns out to not be). Mulder's tendency to odd theories leads him to look for evidence where no one else even thinks to look, which then leads him to discover that the current killer's fingerprints are identical to those of a killer from a series of similar crimes thirty years ago...and thirty years before that...and thirty years before that.

However, the FBI agents in charge of this case don't want to hear any of this, and for his troubles, Mulder endures a lot of mocking as he pursues the investigation in his own way. Scully's loyalties are challenged as she is presented with an opportunity to further her career and steer herself back into a more "normal" path up the FBI ladder, as opposed to "wasting her time" following Spooky Mulder on his wild alien chases. I suppose it's no surprise which path she chooses, in the end, especially when in a bit of spite the other FBI guy (whom she knew from FBI school) torpedoes Mulder's stakeout of the real killer.

As for the killer himself, Eugene Victor Tooms is one of the series's creepier creations. He is clearly not insane, but he is terribly, terribly dangerous. Tooms hibernates for thirty years, and when he awakens, he must find sustenance – by consuming human livers. And there's something about his skeleton and his musculature that allows him to contort his body in ways that allow him to crawl through ducts and chimneys that are barely big enough for a large cat. Tooms's serene expression when being questioned is chilling, as is the way he smiles at episode's end as he looks at the tiny slot on his asylum door through which his guards put his meals.

This episode establishes to a great degree how sceptically Mulder is viewed by the rest of the FBI, and not for the last time is Scully put in the position of having to choose between expediting her rise in the Bureau and sticking with Mulder in his bizarre investigations and crazy theories. Those decisions get easier as the series goes by, but early on, the show does a very good job of showing that Scully is seriously thinking about these things. She doesn't know Mulder well enough, yet.

Eugene Victor Tooms would return later in the season, in the episode "Tooms". We'll get to that one soon enough, but for now, "Squeeze" is another early high-point in the series's run.
scrawled here by Kelly Sedinger at 9:01 PM