Let's get to the linkage!

:: I have a huge confession to make. It's something that I've tried to hide, but I can no longer keep silent. I'm sure that when you read it you'll all leave me en masse and never come back here again. I will have crossed that line with you at last. (I need to...be more exposed to what Steph is confessing about here.)

:: They need to be ready because in January the awards season begins!! A standard rule of thumb: an actress’ skin must be pulled tighter than the red carpet. What they don’t understand is that viewers don’t say, “Wow, she looks amazing!”, they say, “Wow, she looks like Barry Manilow.” Not that the interviewers are any better. One day Joan Rivers and Ryan Seacrest will look as one. (OMG, the photo in Ken's post can not really be Meg Ryan, can it? Oyyyy....)

:: I wasn't planning on writing anything on the anniversary of John Lennon's death. I figured there would be plenty of other voices on the InterWebs this week paying tribute and remembering, and anyway I honestly didn't think I had much to say about the subject because, as crappy as this is going to sound, John Lennon just doesn't mean that much to me. (This post doesn't go in the direction it sounds like it's about to go. Trust me.)

:: Donn Esmonde wants a museum at Canal Side. That’s a great idea, seeing as museums and nostalgia are the only growth industry we seem to have in this region. (For the life of me, I don't understand why "set up some zoning regulations for how we want the waterfront to look and then just sell the lots and let entrepreneurs do their thing down there" is never seen as an option. Instead, we endlessly kvetch over what to build on the Buffalo waterfront. Ugh! By the way, lots of people complain about the idea of "big box retail" on Buffalo's waterfront, apparently being of the notion that a big-box store is incompatible with the type of walkable urban development that we supposedly want around here. Well, check this out: 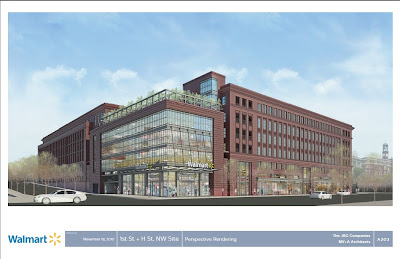 That is a proposed Wal-Mart for Washington, DC. Looks pretty urban and walkable to me. Zone it and let people build, folks. That's how you get a vibrant waterfront.)

:: We work hard to shield kids from all things bad. In the process, though, we rob them of opportunities for self protection. (I have no memory of how I found Robyn's blog, Life by Chocolate. It's just a terrific blog about life in general.)

:: There are people out there who have no one to relate to, to talk to, to share with – for one, because our society is so reluctant to open up about death and other difficult subjects. And so, I relate, talk, share. And people, like my overall-wearing, pie-throwing reader in New York, relate, talk, and share back. (She's referring to me, there. Beth Howard is one of my favorite blog discoveries of the last few months. I've been reading her for a while, after discovering her during one of my searches for fellow lovers of bib overalls. I found that, in addition to proudly wearing overalls, she lives in Iowa in the very house that's in the background of the famous painting American Gothic, and that she uses her blog as a way of dealing with some of her issues of grief and sadness after she suffered a staggering loss: her husband, who passed away unexpectedly a little more than a year ago. One week before what would have been Little Quinn's fifth birthday, actually.

Beth also uses pie as a metaphor for a lot of life's struggles, and she approaches the baking of pie as therapy and a method of engaging a world that can seem harsh and uninviting at times. She and I have been Facebook friends for a little while, and I recently corresponded with her about issues of grief, and about communication and writing in Blogistan -- which some folks find to be of little worth -- and about my own love of pie, which includes not just the making and eating of it, but also the wearing of it. Basically it was "Hey, you wear overalls and make pies; I occasionally wear overalls and get hit with pies."

I refuse to see blogging as worthless, just because it's online or because online writings seem more ephemeral than stuff that appears on paper. In some ways, I suppose, it is more ephemeral, just from a preservation standpoint, but I'm not sure the distinction is as strong as some seem to think. I'm always struck, when I'm at the library book sale, by all those old paperbacks with jacket copy that reads along the lines of "The latest riveting novel from one of our most beloved storytellers!" or "This novel is sure to be read and treasured for many years to come!" And it's always some author of whom I have never heard. On the occasions when I Google such an author, their name only shows up on used book seller sites. Their books are nearly completely forgotten.

:: We’ve all heard the stories about people who put up their tree only to have it tip over during the night. I’m ashamed to say it’s even happened to me once in my younger days, but over the years I’ve honed my methods and now can put up a tree the kids could climb — I wouldn’t put it past my boy, either. (Great advice on putting up the Christmas tree! Listen and learn, folks! There's some great advice there -- not the least of which is, Toss the eyebolts and use different screws. Using better-quality hardware than what comes with the item in question is almost always a good idea.)

All for this week, folks!
scrawled here by Kelly Sedinger at 12:03 AM

But IS blogging more ephemeral than paper? assuming Blogger doesn't go out of business, might not your blog be around somewhere for someone to find dozens of years from now? Whereas Sunday's newspaper will be only be in the recycling, unless 1) it's edited to be a book or 23) it's online.