Oddities and Awesome still abound, even in the Christmas season! Heck, they may abound even more this time of year than any other.

:: When I finally decide to take the plunge into my Life of Crime, if I am captured by justice in Glasgow, Scotland, I at least hope that this is my arresting officer: 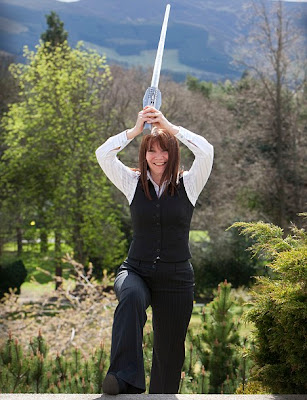 Because she's a Jedi.

:: The Universe is very big. Except for when it's very small. Check out this interactive tool to discover relative sizes of things in the Universe. (Yes, it's similar to the famous educational movie Powers of Ten.)

:: This won't really be of interest to anyone in particular, but wow -- here, in a single thread at the FSM Board, is why I no longer bother to interact with film music fans except for a couple on a one-on-one basis. The fact that a thread like that can crop up on Christmas Day is pretty illustrative, and it's all there: the kvetching over the jerks in the "community"; the jerks acting like they've bagged themselves a big prize in the fox hunt; other people still trying to cling to the notion that their particular little forum is still somehow better than all the other forums out there; someone else suggesting -- and, it seems, being ignored completely on the point -- that since this type of thing happens at most places film music fans gather, then maybe, just maybe, there's a problem inherent with "the community". And, amidst it all, one of the bigger jerks over there, who has taken great pride in being a jerk there for years, gets a stern warning from the board owner. But will the jerk get banned? Of course not, because nobody at FSM has the guts to actually pull the trigger and ban anyone, no matter how obnoxious they get.

More next week!
scrawled here by Kelly Sedinger at 9:53 AM

I don't know if I should admit this -- it could do incalculable damage to whatever credibility I may possess (which, granted, probably isn't much) -- but I happen to own the number-two worst Christmas album, Twisted Sister's Twisted Christmas. Well, at least a copy of it that I, ahem, made from another source. It's actually a lot of fun if you view it as a novelty and not something you're going to put on at the family dinner party or something.

Secondly. I love how that cop employs the Jedi mind tricks. I loved doing that as a teacher to some brat who got caught and tried to wriggle their way out of punishment...ESPECIALLY when the parent refused to believe that there was no way that their precious snowflake could have possibly been involved. To watch the kid admit to the crime in front of their indignant parent and the Principal was a joy to behold I can tell you. No wriggling for anyone. Justice served.