In the service of Naamah 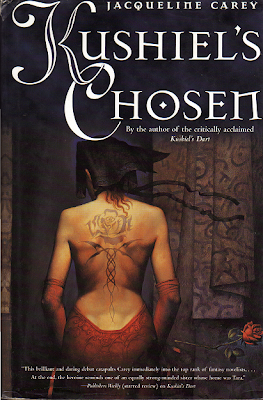 Quite a while ago, I read a wonderful fantasy novel called Kushiel's Dart, by Jacqueline Carey, a long book set in a pseudo-Europe roughly around the Renaissance era, featuring as the lead character a woman named Phedre who serves a goddess called Naamah, an an anguissette -- a courtesan, or concubine, whose major point of attraction is the fact that she is, well, masochistic by nature. Phedre became deeply involved with the court politics of her city, making enemies before she even knew that she had, and eventually found herself journeying across the continent in an effort to save her kingdom from the disastrous war that was about to befall it. Along the way, she fell in love with her companion and bodyguard, a conflicted young man named Joscelin Verreuil. At the end of the book, most threads were resolved satisfactorily, save one: the escape of the main traitor of the first book, Melisande Shahrizai.

The sequel, Kushiel's Chosen, opens with Phedre having been made a noblewoman by the new Queen, and with Melisande still at large and very likely scheming anew against the realm. Phedre takes it on herself to try to find Melisande and the insiders who helped her escape. This leads her anew into ever more dangerous areas of court politics, evil plotting, selling herself to people she would rather not, and journeys to areas we didn't visit in the first book. All the while she is searching for clues to the magic that will release her dearest friend, who voluntarily took on permanent magical imprisonment in the first book.

Kushiel's Chosen is, as it happens, the middle book of a trilogy, and so it has some of the problems inherent in middle books, leaving certain plotlines unresolved in an ending that sets up the final book. But enough of the plotlines that are inherent to this book are tidied up, so while there is a sense of "To be continued" at the end of Kushiel's Chosen, it is still an overall satisfying read.

The strength of the book, as in its preceding volume, lies in Carey's writing and in her ability to populate a familiar world with interesting and sympathetic characters. In Phedre and Joscelin, Carey has created a couple we can't help but root for – but she does not make things easy for them, in any way at all. They are, in many ways, completely different people, and their relationship is a clear illustration of the old precept that the people we hurt the most tend to be the people we love the most. Carey creates a number of other fascinating new characters here as well: cruel jailers of an inescapable prison, a Prince and Princess who rule a distant island kingdom, a pirate captain, an entire people of supposed heretics who are looking for someone to lead them to the homeland that their god promised them, and many others.

I did find that Kushiel's Chosen was not quite as engrossing as the first novel; the first half of the present book is mainly character-driven drama that doesn't move along very briskly at all. The second half is where things start to happen, and the pace livens significantly after that. The first book had some of the same problem, but in that case, Kushiel's Dart had the sense of exploring a new world that we didn't know helping to alleviate any problems arising from slow pacing. In Kushiel's Chosen, we already know the world we're reading about, so it is a bit more of a problem here. (But it is in no way a large enough problem to detract from reading the book in the first place.)

I am already looking forward to reading the final volume in this trilogy, Kushiel's Avatar. Carey has also written several other books set in this world; I hope to eventually read those, as well.
scrawled here by Kelly Sedinger at 11:07 AM