Regarding a bit of recent reading:

:: Some years ago -- I don't recall how long -- I read the first few volumes in Lois McMaster Bujold's series of books on the adventures of a man named Miles Vorkosigan. I'm not sure that the series has an "official" name, so for my purposes, I'll call it the Vorkosigan Chronicles. I'd been hearing about these books for years; it consists of a long series of self-contained novels about Miles Vorkosigan and the people around him, and every time a new book in the sequence would come out, I'd see a flurry of discussion in various forums online as fans of Bujold's books devoured her latest offering.

This is one of those series where there tends to be a bit of diverging opinion as to the "best" order in which to read the books. One can read them in "story order", meaning, reading the books in the order that the events within take place; or, one can read them in the order in which the books were published. In truth...I'm not sure which order I went with. Baen Books has reprinted the novels over the last few years in omnibus editions that gather two or three at a time, making it easy to read the books more-or-less in story order, or so I think. Anyway, I started with Cordelia's Honor, which gathers two novels, Shards of Honor and Barrayar, which tell the story of how Miles's parents come together and have their famous son. So I read a book consisting of two books, out of publication order.

You can see how this gets a bit confusing.

Anyway, this was the second time I had read Cordelia's Honor. The first time, I liked the book just fine...but I wasn't sure I understood the wild love that fans have for the series. I found it genial enough, but I wasn't overwhelmed. I later read The Warrior's Apprentice, the first actual book about Miles himself, as part of the omnibus Young Miles. That one, too, I enjoyed...but wasn't overwhelmed.

So why did I decide to return to the Vorkosigan Chronicles? Well, even though I wasn't wowed by it, I did like it, and always meant to get back to it. But I'd waited long enough that I figured I pretty much didn't remember enough of it to keep going, so I figured I'd best start over at the beginning. Which meant going back to Cordelia's Honor. And this time, I was wowed by the book.

I'm finding that this happens a lot for me when I return to books some years later, especially SF books that I either didn't dislike but also didn't find fantastic the first time around. I chalk this up to the fact that I'm a more experienced SF reader now than I was even five, six, seven years ago. I find it easier to pick up on certain SF tropes now than I used to, which makes it a lot easier to read some of these books.

But maybe this shouldn't have mattered so much in the case of Cordelia's Honor, as the book is very character-driven. At no point did I get a feeling that I was reading the unfolding of a plot, but rather following the actions of a group of characters, some of whom are deeply sympathetic and some of whom are...deeply not. As the book opens, Captain Cordelia Naismith is commanding a scientific expedition on some planet when her group is attacked by soldiers from the militaristic world of Barrayar. Left behind by her fleeing co-workers, she finds herself depending on the similarly-stranded Barrayaran officer Aral Vorkosigan for her survival. Cordelia is from Beta Colony, a rival world of Barrayar, and as the two work together to survive, they discover plots afoot...and increasingly complex feelings for one another.

I don't want to give away much, since the story twists and turns in a lot of fascinating ways, but it's no spoiler to note that eventually Cordelia gives birth to young Miles Vorkosigan, who will be the hero of all the books and stories in the series to come. Miles, though, is not without his own set of challenges; for reasons outlined in Barrayar, Miles is born with his growth stunted and with extremely brittle bones that are constantly breaking. In short, Miles is the last kind of son a man would wish to have in a heavily militaristic society. I look forward to reading how Miles overcomes these challenges in the books ahead; just from the two volumes presented in Cordelia's Honor, I can tell that Bujold's approach is to create engaging, sympathetic characters and then put them through hell.

:: Another book that I probably should have read long before this is Madeleine L'Engle's A Wrinkle in Time, which was published in 1962 and won the Newbery Award. [CORRECTION: Until just today, I always thought that the famed award for Childrens' Literature was spelled "Nerberry". It's actually "Newbery". Thanks to the reader who pointed this out -- that reader being none other than my retired librarian mother. Thanks, Mom!] I had no idea at all what to expect from this book, but even so, it defied the few expectations I had. I expected fantasy, but the book is much more strongly science fictional than fantastic in nature (even taking into account the forever-shifting dividing line between SF and fantasy). As with many books involving children as protagonists, the heroes are misfits -- generally unpopular at school and not understood by anyone except for a couple of their peers. They are whisked away on an improbably adventure, this one to rescue their father, who has been missing for years and whom most believe to have basically run off, either with a mistress or for some other reason.

What makes A Wrinkle in Time compelling, in addition to well-done characters, is the ominous tone struck throughout the book, and the fact that it's so overtly SF. Among books published today, I don't see a whole lot of SF for kids, but there's so much in Wrinkle that is SFnal that I end up wondering anew when it was that kids turned away from SF, or had SF turn away from them. Nowadays, it seems that the only real SF-type stuff kids ever see aimed at kids are a lot of Star Wars materials and superhero stories.

Anyway, I'm not sure how A Wrinkle in Time managed to elude me all these years, but I'm glad to have it off my "I should read that sometime" list. Now to track down the others in the sequence.

:: Way back when we were in college, The Girlfriend (now The Wife) bought a goofy book called 14000 Things to be Happy About. And that's exactly what it is: a giant list of 14000 things you should be happy about. 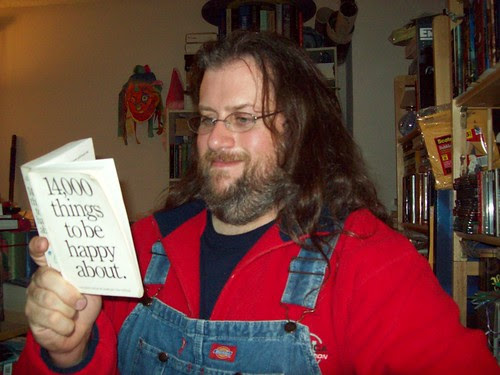 Of course, I'd be silly to read anything into this, but it tickles me nonetheless to see two of my favorite things on the same page, out of 14000: 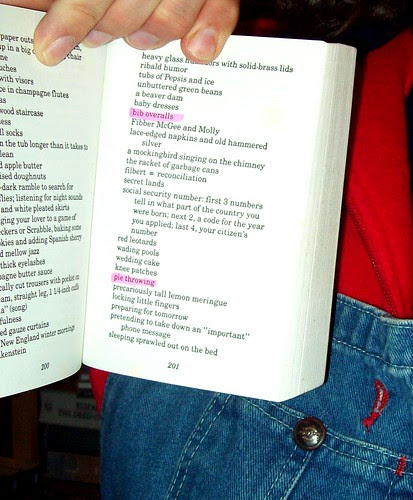 Of course, I'm ambivalent about unbuttered green beans, and I'm not sure why I should find appeal in the rattling of garbage cans, but bib overalls and pie throwing? I'm there!

I had the very good fortune to have a long conversation with Lois Bujold some years back. On the topic of in which order her books should be read she was of the firm opinion that a reader could jump in pretty much anywhere and get enough out of it. They didn't need to be read in any order at all. She liked to think that she had designed each book to be fairly independent of one another. At least that's what she told me at that time (that was just after Barrayar had been published)

She was a real pleasure to talk to and she was surrounded by an entourage of very rabid fans who had made their own costumes based on the books (no movie designs to copy from, just her descriptions which I thought was amazing) and she was happy as a clam.