And it even ran on time! 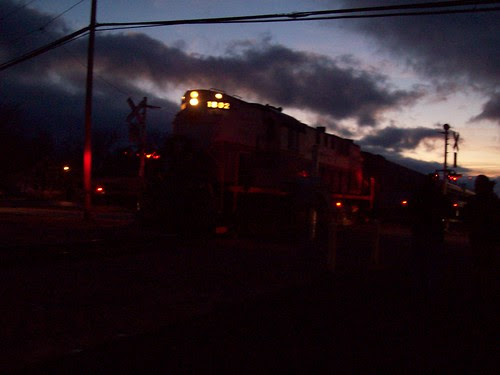 This past weekend the family and I journeyed to the lovely-appearing town of Medina (about forty miles or so due east of Niagara Falls), to tour the Medina Railroad Museum, which is exactly what it says it is: a museum dedicated to the history of freight railroads in the region. It's a converted rail depot and train station, right in the middle of the village, and the inside is huge and extensive, with the walls of the depot absolutely loaded with rail artifacts and memorabilia, and the center of the depot dominated by the biggest single model railroad layout I've ever seen. This layout involves a lot of trains that move through a large series of different topographical tableaus; there are ore trains moving through the mountains, passenger trains moving through a city, long bridges over deep valleys, and all the usual model railroad stuff. There are also displays of railroads from earlier times: steam locomotives and one very tiny Victorian train that went in its own little circle.

And tucked away in one corner, easy to miss, was a little Civil War battlefield, with the Blue and the Grey facing each other across the lines, and one group nearby that had dynamited the nearby train tracks. The detail was amazing.

After the tour of the museum, we boarded the Medina Scenic Railroad for one of those half-hour out, half-hour back excursions through old corn fields, through the towns along the old freight route, and along the Erie Canal. What struck me was the old industrial infrastructure of all those old little towns, where each town had its own factory once upon a time that made something or other; those factories' ruins are built right up to the tracks for onetime loading and unloading of freight. Now no one sees those loading docks except for the passengers on that scenic railroad. Alas.

I've always loved trains, and I wish train travel in this country was cheaper and more prevalent. It just strikes me as more civilized than flight. You really feel like you're going somewhere when you can watch the ground going by and the towns sliding past.
scrawled here by Kelly Sedinger at 1:39 PM

"civilized" - always my thought about trains vs. the flying Greyhound.

Wow. That's a beautiful photo! Did you take that?

Yup! I had no idea my camera could do a photo that nicely at night. I turned off the flash and it turned out beautiful. I didn't even tweak it in Photofiltre or anything.

While I agree with the sentiment re: train travel vs. flight -- in the post-9/11, post-airline meltdown era, flying has become an endurance test with little dignity or enjoyment -- the sad fact is that nobody has the time anymore to spend several days on a train going from one place to another, not when you can take a flying cattle car, er, airplane and be there in five hours. Convenience and speed always wins out over charm and comfort.

I agree with Jason, although I suppose that if I had in-laws and didn't like them, taking the train would seem like the perfect way to read a few books, catch up on some z's and not stay too long.