The Ball of the Foot

:: I admit that I thought for sure that Brett Favre would start to stink up the joint at some point, and aside from that one game against the Cardinals, he hasn't. But then, the Vikings' schedule has really helped him out, hasn't it? First, they play in a bad division (even though the Packers seem to be catching on finally); second, they're in a dome; third, with just two or three exceptions (which are almost all behind them anyway), it seems as though each time they face a good teams, they're at home, and their road games have been mostly against bad teams. I don't know, but I don't see them beating New Orleans on the road. But then, eleven years ago I didn't see Atlanta beating Minnesota on the road, either....

:: Kurt Warner is a Hall of Famer, and I'll have strong words with anyone who says he isn't. I love that guy.

:: If nothing else, I'll always love the 2009 season for giving me this scene: 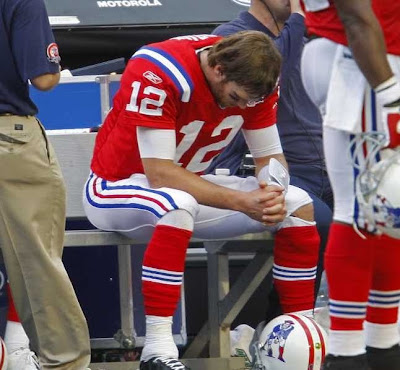 :: I heard quite a bit of talk radio chatter today about Randy Moss, who is apparently in a bit of hot water in New England right now because he might not be squeezing out maximum effort. Well, no one has a right to be shocked about this at all. I recall one sports pundit writing this, shortly after the Patriots' not-quite-undefeated season thudded to a close:

And then there's Randy Moss, who somehow gets credit this year for being on his best behavior, which is his history as a player, when he is winning. If Moss re-signs with New England, and he's still with them in two or three years, let's see how happy he's acting if the team is 10-6 and making an early exit in the playoffs. I have a strong feeling that we haven't seen the last of the "I don't play hard all the time" Randy Moss.

That was me, by the way. Boo-yeah!

:: This time of year brings many things to football fans. If you're an NFC East team fan (aside from the Redskins), you're rooting for a playoff run. If you're a Colts fan, you're thinking about selling your tickets to the remaining home games because they're going to be on autopilot until the playoffs get here. And if you're a Bills fan, you debate your fellow fans on the issue of whether it would be better for the team to lose out, and get a better draft pick, then keep trying to "fight the good fight" and pick up a meaningless win or two. I can sort of understand the sentiment, but to me, this thinking is somewhat wrong-headed.

Consider that teams like New England, Indianapolis, and Pittsburgh have been good for years now, despite rarely picking in the top five of the draft, if ever. How do they do it? Those franchises have GMs and front offices that know how to evaluate talent and how to make the most of the draft choices they have. Those franchises are constantly picking guys who develop into studs, and they don't need to be in the top five of the draft to do it. That's what the Bills lack, and have lacked, for years.

The Bills are likely to pick somewhere around tenth this year. Maybe they'll get as high as seventh. At that spot, they can still get a good player, or even trade down to add picks later in the draft. But they desperately need a new front office to make this work.

Put it this way: would I rather have the Bills' current brain trust running the draft if they had the top pick in each round, or would I rather have a clone of Bill Polian running the Bills' draft if they were only picking twentieth? Yeah, I'm gonna go with the latter. So, losing or winning right now doesn't matter, except for the possibility that winning their way to 7-9 or even 8-8 might cause Ralph Wilson to conclude that the front office is just fine, even though these are the guys who traded up for JP Losman and John McCargo, took Aaron Maybin over Brian Orakpo, decided that Haloti Ngata wasn't as big a stud as Donte Whitner, and so on. That would be disaster.

A lot of thinking, given that I haven't even been watching football lately!
scrawled here by Kelly Sedinger at 6:42 AM

The Steelers simply fell to a much improved and superior Cleveland Browns football team. Inevitable really considering the phenomenal rebuilding process that is taking place.

I must say though, I am worried about Big Ben. He looked mighty dazed on more than a few plays. This concussion stuff is really changing the game for the worse in my opinion. I mean we may be getting to a Boom Boom Mancini moment in football (a point where the sport becomes so violent it simply is not entertaining anymore for people who view it as a sport)

Football is being ruined by players who want to be on a highlight reel so bad they have started using their helmet as a weapon.

Hmm. Kurt Warner had 3 good seasons (1999-2001), then disappeared for five or six years, for a variety of reasons (his year with the Giants was a disaster). Only started coming back in 2007. I was looking at this page and it compares him with Daunte Culpepper, Jeff Garcia, Trent Green, Rich Gannon, Bert Jones, Jim Zorn, Greg Landry, Drew Brees, Joe Theismann, Jake Plummer. Are ANY of them HoF QBs?

Warner's three "good" seasons were actually great seasons; he was MVP twice, went to two Super Bowls, and won one. Then it took him some time knocking around the league after a perniciously annoying injury (an ailment that screwed up his throwing mechanics), and he put together one of the most memorable comeback stories in NFL history. He's come to two moribund, long-time losing franchises and carried them to the Super Bowl, and let's not forget his toiling in Arena football and stocking shelves while awaiting his chance. Maybe Warner's stats, for various reasons, aren't terribly gaudy, but it's the Hall of Fame, not the Hall of Stats.