A Walk in the Woods Yesterday I had several hours in the afternoon during which I was alone: The Daughter was elsewhere, and The Wife was at work. So I decided to go back to Chestnut Ridge Park, where we spent some time last week. It's a place that deserves to be nearer and dearer to my heart than it is, because it's so beautiful and close and yet I don't get there all that often.

Chestnut Ridge is a park run by Erie County in the "Southtowns" region, where the terrain starts becoming more hilly as one moves away from the flatlands that surround Lake Erie. The most famous feature of Chestnut Ridge is its giant sledding hill, but it's a very beautiful natural place, with lots of hiking, riding, Nordic skiing, and snowmobiling trails. Somewhere within its boundaries there is a natural "eternal flame"; that's high on my list of things to see next year when it starts getting warmer.

Yesterday, I went to a part of the park I'd never been in before. The road follows a ravine to the left, although the ravine is behind a ridge and can't really be seen from the road. I came to a parking area, where another road split off to the left and went down toward that ravine. The road was gated shut, although quite a few folks were walking past the barries anyway; I suppose the road was only closed to motor vehicles so that the park people could save money by not having to plow it.

That road dropped down to a steel-deck bridge that spanned the ravine. The view above is the upstream side of the bridge; here's the downstream view. 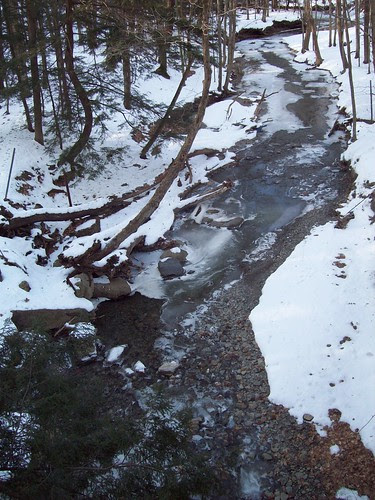 One thing that always amazes are the signs of life, even in the midst of a wintry forest. Such as this sapling: 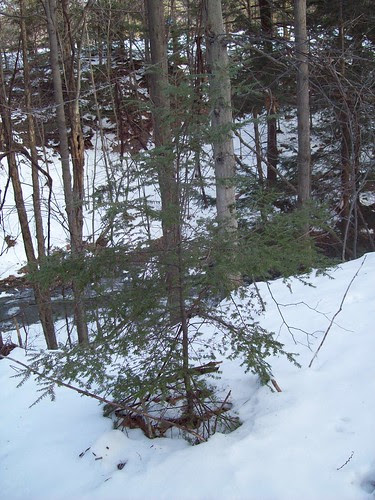 I was only out there for about an hour, but what a wonderful hour it was! 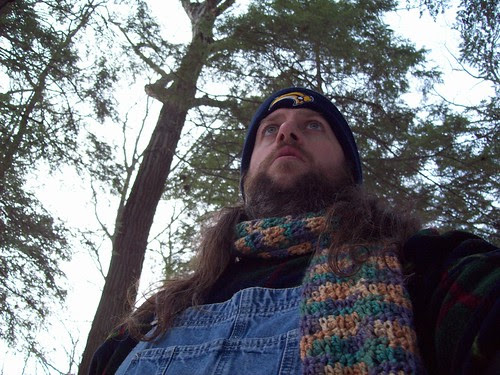