"Your conscience is sensitive, Dan. I don't think it's my favorite part of you." 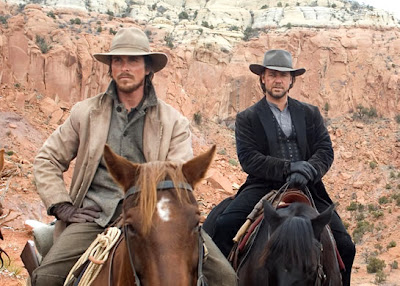 I've always enjoyed Westerns, for the most part. I've been trying to think of a Western that I actively disliked, and I've been unsuccessful; the best I can do is find Westerns that aren't my cup of tea, like The Searchers and the 'spaghetti Westerns' of Sergio Leone. But every Western I've ever watched has been, at least, admirable or entertaining on some level.

Most recently I watched 3:10 to Yuma, the 2007 remake of a 1957 film of the same name. What struck me about this film is the way it is not a "deconstruction" kind of Western; it's not a Western that feels the need to make statements either about the genre itself (Unforgiven) or different statements about the West (Dances With Wolves). 3:10 to Yuma is nothing more than an archetypal blood-and-guts Western, with good ranchers who are down on their luck, bad guys who are very good with their six-shooters, towns where the marshals are openly corrupt when they need to be, tense evenings around the campfire, ill-advised ventures into Indian territory, stagecoach robberies, and all the rest.

Russell Crowe is Ben Wade, the leader of a gang of criminals who are extremely brutal in their crimes -but interesting, Wade himself isn't shown to be especially brutal himself. His underlings, though, are very brutal, chief among them his second-in-command, the possibly psychotic Charlie Prince. Just once in the film is the question raised of how bad a man must Wade be to actually lead these guys.

On the other side of the moral ledger, we have Christian Bale as rancher Dan Evans, who is just about as down on his luck as he can be. His ranch is desperately close to foreclosure, the railroad company is itching to take his land, the water to his ranch has been diverted, his older son thinks he's a failure, and he's trying to do the best he can despite the fact that he lost a leg in the Civil War. Evans meets Wade by chance early on, and then again a short while later, when Wade is captured. However, Wade's gang is still at large and will clearly do whatever they need to do to get him back, so a dangerous mission is undertaken to take Wade to the town of Contention, where they will put him on the train that departs at 3:10 pm for Yuma, and the prison there. The 3:10 to Yuma. Dan, our rancher hero, is good with a rifle, and volunteers to go, for $200. They set out, and it's a race against time and a group of violent bandits.

What's interesting about this particular race against time is that it's almost an anti-race against time. Most races against time are of the "Do X before Y happens or else". Here, the goal isn't to do something in an allotted span of time but to get something done at a very specific time, even though that specific time is a little ways off and there are all kinds of obstacles between. It's a combination, really, of a race against time and a dread-filled wait for a moment where we all know all hell will break loose. These two relations to time come into play over the course of the film, creating very different kinds of tension in very different places.

This is, simply, a very good film. Its performances are all first-rate, and the chemistry between Christian Bale and Russell Crowe is outstanding. The supporting cast is superb across the board, most notably Ben Foster as Charlie Prince, a man whose devotion to Wade is never explained, or even speculated upon, but is yet somehow suggested. The conversations in the film, especially those between Evens and Wade, all feel quite real and almost unscripted, as both men feel each other out and stake out their own moral claims on what is going on.

That's what impresses me so much about the film: the fact that it so clearly understands the notion that even villains see themselves as the heroes of their own story. Ben Wade acts, throughout the film, in accordance with a very real moral code, and we, somewhat like others in the film, admire him for that, even as we acknowledge that his moral code is not a good one. But it is a code, and we know that, for all his murder and robbery, Ben Wade is actually more moral than some of the men who capture him.

3:10 to Yuma is a terrific film. Highly recommended.
scrawled here by Kelly Sedinger at 4:20 AM

I'm generally not a fan of Westerns, but I really enjoyed this one. I think I agree with every opinion you stated!

I don't agree with his majesty at all about The Searchers. This is one of the best westerns ever made, it portrays the settlers in a real light, not overly glamorized. The movie demonstrates their tenacity in light of the brutality they faced.

Refreshing after being force fed the Indian- as- victim manifesto. Oh, I mean Native American. Of course that could soon change as "native" is one of those uh oh words. The Cleveland Indians logo is offensive so we need to pay reparations? What about some reparation to the Irish for the Notre Dame logo? Or the Polish for the years of slander they faced as the butt of jokes (how about sorority girls)?

What would the Duke say, indeed