Jax for short, which he ain't

The other day, my sister-in-law gave birth to her first child, a boy, who is now my first nephew. His name is "Jaxon".

Maybe it's my curse as a lifelong (well, for all intents and purposes, anyway) Star Wars geek, but there's a special set of Star Wars geeks whose memories would be piqued, maybe with fondness and maybe not, by the name "Jaxon".

Back in 1977, Marvel Comics got the rights to do the comics adaptation of Star Wars, and their adaptation ran in issues 1-6 of their SW comic. After that, however, the book kept running, telling stories that took place in the days following the destruction of the Death Star. It was the first attempt at an "Extended Universe". (In truth, some of those stories weren't half-bad, honestly. Although some of them were that bad.)

The first storyline after Star Wars had Han Solo and Chewbacca leaving the Alliance so they could finally pay of Jabba the Hutt. En route to Tatooine, they are raided by space pirates, who steal all of the money Han intends for Jabba. Now poor again, Han and Chewie arrive on a dirt-poor world called Aduba-3, where they quickly find themselves approached by villagers whose lives are tormented by a gang of criminals led by a guy named Serji-X Arrogantus. Han and Chewie take the job, hiring a motley group of warriors and space pirates to fight off the interlopers. Yes, it's The Magnificent Seven or The Seven Samurai meet Star Wars; among Han's hires are an old and dotty man claiming to be a Jedi Knight (called "Don Wan Kihotay"), a walking porcupine who shoots quills, and a seven-foot-tall green rabbit.

I'm not making that last up: 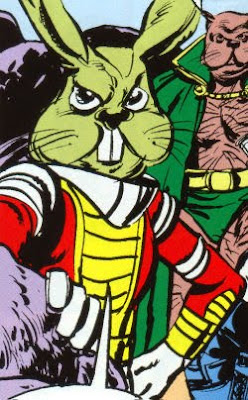 There he is. His name? JAXXON!

I was really hoping they would use two X's in the spelling, to make this reference perfect -- but still, this is pretty cool stuff. Call him 'Jax' for short, which he ain't.
scrawled here by Kelly Sedinger at 8:38 PM

You know, I think those early comic book stories -- the run between the first two movies, at least -- are still my favorite "Expanded Universe" stuff, even though they don't remotely fit into anything that was established later. They have a swashbuckling tone and a fun energy that's rarely been matched in any of the licensed novels, and certainly not in the deadly serious Dark Horse comics that came along in the 90s. Even if they did occasionally feature silly things like humanoid rabbits and porcupines.

I agree with Jason about the swashbuckling concept. They were fun and didn't seem to care a whit about continuity, which is what makes some of the other EU stuff so dull. (Why tell a story when you can just fill in pieces and pretend it's a story?)

Plus, those Marvel comics gave the world Hoojibs, one of my favorite Star Wars anything ever.

If you've got any fondness for Jaxxon and the rest, those first Marvel issues have been adapted and spun off into an audio drama...