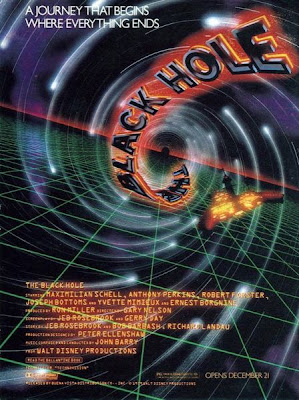 Hey, remember the movie The Black Hole? I ran across a clip of it on YouTube the other day, and I've been thinking a bit about it. Maybe I should track down a DVD at some point. (Spoilers here, but the movie's 30 years old, so....)

The fine folks at Disney made The Black Hole in 1979. It was their entry in the "Hey, the kids do sure like that Star Wars, so we needs ourselves a space movie too!" sweepstakes that resulted in lots of space opera stuff, some of it not bad (Battlestar Galactica), some of it campy but fun (Battle Beyond the Stars), some of it weird (Moonraker), and, naturally, some of it downright awful (Starcrash). So in 1979, along came The Black Hole, which flopped at the box office. I suspect that word-of-mouth wasn't that great, and maybe by then the whole space-flick thing was getting a little tiring anyway and besides everybody knew that the real thing, in the form of The Empire Strikes Back, was less than a year away.

But The Black Hole isn't bad. Neither is it all that good. It's solidly in the middle, occasionally approaching "good", and then veering back toward "bad", but never setting itself up at either pole. So ultimately it's a pretty vexing movie -- was it a good movie inside a bad one, or a bad movie inside a good one?

Our story: a small spaceship, the Palomino, is in deep space when it starts on its journey back to Earth. On the way it comes across a black hole, and perched on the edge of the hole is an immense spaceship which turns out to be the USS Cygnus, which was reported lost years before. Here's the Cygnus, which is one of the most beautifully-constructed movie spaceships ever: 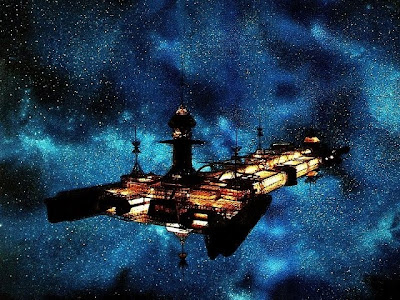 Investigating, they discover the Cygnus in the command of Dr. Hans Reinhardt, who operates his ship with the aid of a crew of humanoid drones, a squadron of security robots, and one very nasty robot named "Maximilian". Here's Maximilian: 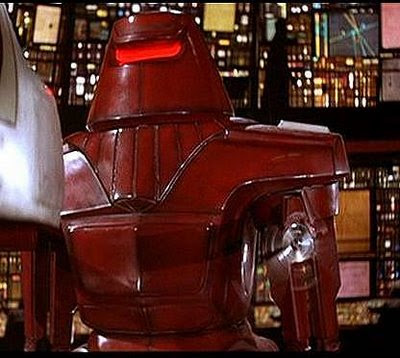 Pretty menacing, eh? Especially as he doesn't walk but rather floats around in the air and is equipped with a buzz-saw weapon which he uses on one unfortunate character later on (who tries to defend himself with a thick folder stuffed with papers -- self defense FAIL).

Anyhow, it quickly becomes apparent that Reinhardt is crazy and planning to fly his ship into the black hole. In keeping with movie crazies of all stripes, Reinhardt refuses to let the crew of the Palomino leave, so now there's a race against time: can our heroes escape before the crazy guy and his crazy robot take them on a journey into certain death?

It's actually a kind of nifty plot, and watching the movie, I always get the impression that the Disney folks, in looking for a way to cash in on the post-Star Wars SF craze, looked for any script they could find, optioned this one, and then, well, Disney-fied it up a bit. There's some serious stuff in this movie, lots of beautiful production design, and even a number of moments of genuine "sensawunda". Here, for example, is the bridge of the Cygnus:

Seriously, that's a gorgeous bridge, isn't it? And nothing at all like the bridges or cockpits of big spaceships in movies to that point, where there's a screen or window at the front and everybody's facing it.

But then, along comes the Disney "We gotta make this for kids too!" stuff. Enter our heroic robot, VINCENT, whose design just screams out, "We need an R2-D2, only cuter!": 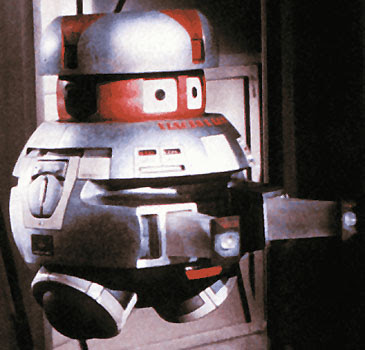 And later on, after we've gotten used to VINCENT, we meet an earlier model, who is called in the film -- I kid you not -- "Old BOB": 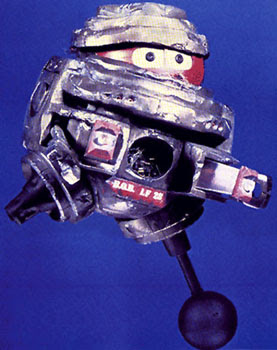 Old Bob is voiced by Slim Pickens. Can't have a movie without an old-timer to tell the heroes what's really goin' on, I guess. (VINCENT and BOB are acronyms, of course, but I'm too lazy to Google what they stand for.) And our heroes end up in a firefight at one point with some very goofy looking security robots:

Well, Imperial stormtroopers they ain't, although I did like their double-barreled blasters.

So, do they escape? Well, yes -- and no. They get free of Reinhardt, by stealing his personal ship (or something like that), but it turns out that it, too, is programmed to go through the black hole, so in they go, after the Cygnus has already been destroyed. This is all well and good, of course; the black hole itself is the film's gun on the mantelpiece, and we've got to see it go off, right? This brings us to the film's final scenes, in which we see not just what happens to our heroes as they go through the black hole, but also, in one of the oddest sequences to ever appear in anything with the Disney imprint, what became of Reinhardt and Maximilian:

Imagine what that felt like for a nine-year-old kid sitting in a theater! Evil genius and murderous robot somehow fuse together in some kind of sexual-looking event, and then end up presiding over Hell? Huh-whuh?!

Ultimately, The Black Hole is too slow-paced to be really exciting; its camp elements undermine the more successful moments of mystery and impending doom; its mysteries make the camp stuff all the more irritating. But still, it's kind of a fun flick to watch -- especially if you can arrange to be drunk when those last six minutes arrive.
scrawled here by Kelly Sedinger at 8:13 AM

I pretty much agree with everything you've said about the movie, though there are segments I find pretty tedious. I didn't see this movie until I was maybe 26, but I've always found VINCENT and BOB pretty endearing. I'm a sucker for that kind of stuff, though, even if you can see the wires WAY too often.

I liked John Barry's score, though it tries a little too hard to force a sense of majesty.

Black Hole had put a hole in my capitalist heart. FantaCo bought a LOT of comic adaptations of them that really stiffed; it was quarter bin fodder for YEARS. Never even READ the comics, let alone see the movie.

I'm about to prove my total domination of all things geek by revealing the robot-name acronyms:

BOB = BiO sanitation Battalion (Okay, so that one doesn't quite work, but it is what they say in the movie.)

I love The Black Hole myself. It's not a great film, as you note, but I've always found its moody atmosphere compelling, especially when compared with all the upbeat space operas released around the same time. (Personally, I don't think it really belongs in the "late-70s Star Wars rip-off" category; even with the robots and laser battles, it's just too different in tone and premise from all the other blow-em-up SF flicks that really were copying Star Wars.) And I think its production design is both beautiful and unique; to my knowledge, no other SF film before or since has had quite the same look as this one. (That's largely based on the strength of the Cygnus' design, of course, since it's the primary setting. But how many other movies have had a starship that looks like a Victorian greenhouse?)

For a really interesting take on this movie, which argues that there's more here than we might assume at first glance (especially regarding that weird end sequence with Reinhardt and Maximillian in Hell), check out John Kenneth Muir's review here: http://reflectionsonfilmandtelevision.blogspot.com/2009/04/cult-movie-review-black-hole-1979.html

Jason: I didn't say that it was a "Star Wars rip-off", but rather a film that was clearly made to capitalize on a major popular culture fad at the time, which it clearly was. Without the enormous success of Star Wars, Disney would have never greenlit The Black Hole. (Same with Battlestar Galactica, which many assume to be a hastily thrown-together Star Wars rip, but which had actually been pitched in the early 1970s by Glen Larson and rejected until Star Wars changed the marketplace.)

One thing I didn't mention in my post is the film's obvious production design debts to Disney's earlier 20000 Leagues Under the Sea, complete with bearded Mad Scientist and major vessel (spaceship in this case) with Victorian design elements.

By a curious coincidence, I had that nifty little march from the movie soundtrack constantly running through my head last week and it took me quite a while to figure out what is was from. (A great soundtrack, BTW, and apparently not available on CD.) I totally agree with your overall assessment of the film, especially in regard to the movie's at time stunning visuals. Reinhardt's creepy, human-derived cyborgs also stick in the mind. It's funny now to notice how much Old BOB looks like Cartman from South Park.

Jaq, I misspoke. I didn't mean to suggest you were calling the movie a Star Wars rip-off, only that it is often dismissed as such. But then so is just about every space movie from that time period...

Well, to be fair, most space movies made at that time were Star Wars rip-offs. Just as a lot of adventure movies made in the 1980s were Raiders of the Lost Ark rip-offs. And many modern movies made today are Bourne Identity rip-offs.

I must confess to having a soft spot in my heart for The Black Hole though the older I get, the more I wonder why. Perhaps it's the opening credits. Or the fact that I saw it as a teenager.

"imagine what that felt like for a nine-year-old kid sitting in a theater! "


I was a ten year old kid sitting in the theater, and I remember the ending as being, literally, scary as Hell. The whole flattening-out thing and what followed it. (I admit with some embarrassment that I realize my expectation of what would happen if Earth wound up going through a black hole is largely based on the end of this movie)