Apparently there was some kind of big fashion show or something like that this week past, at which Ralph Lauren showed, as part of his collection, a model wearing overalls. 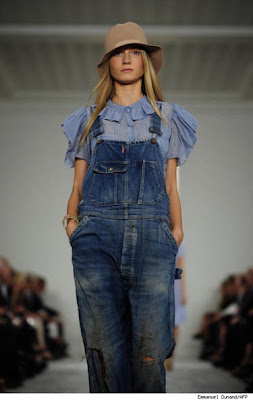 I continue to be confused by the whole enterprise of "fashion". A certain look or group of colors or whatever gets declared to be "in" by one of a very tiny community of people in New York City, and then pretty soon everybody's wearing what they've declared to be "in". And then, gradually, those looks are replaced by newer ones, and the older looks are unanimously viewed as "out", and in some cases, the "out" looks get filed under "OMG what was I thinking!" And then someone comes along and declares the now-hated "out" looks to be back "in".

Now, if more people are wearing overalls six months or a year from now, fine by me, but I just figure, "Here's something that works for me and I'm gonna stick with it, thank you very much." I don't much care that they're "unflattering", whatever that means (especially as we seem to live in a period wherein "flattering" apparently means, "revealing of every single curve on our bodies"). It just amuses me that overalls were "in" during the 1970s, they never really went away in the 1980s, they came back big in the 1990s, they were "out" in the 2000s, and now Ralph Lauren has decided that they're back "in".

As for the overalls the model up there is wearing, in themselves, they're definitely more my speed as things go: they look more functional than designed. But I'll bet Ralph Lauren worked hard to get them to look that way, weathering them and distressing them in various places, when you can get the same look by doing an eBay search for "Vintage overalls" and spending, in some cases, a lot less than these Lauren creations are likely to sell for. Or you can just buy yourself a brand new pair, keep 'em for years and years, and just wait for them to look like this.

It's a lot less weird if you think of the clothes as costumes, and the wearers as people who like to play dress up...

This little speech, from "The Devil Wears Prada" actually explains it well:

"This... 'stuff'? Oh... ok. I see, you think this has nothing to do with you. You go to your closet and you select out, oh I don't know, that lumpy blue sweater, for instance, because you're trying to tell the world that you take yourself too seriously to care about what you put on your back. But what you don't know is that that sweater is not just blue, it's not turquoise, it's not lapis, it's actually cerulean. You're also blithely unaware of the fact that in 2002, Oscar De La Renta did a collection of cerulean gowns. And then I think it was Yves St Laurent, wasn't it, who showed cerulean military jackets? I think we need a jacket here. And then cerulean quickly showed up in the collections of 8 different designers. Then it filtered down through the department stores and then trickled on down into some tragic casual corner where you, no doubt, fished it out of some clearance bin. However, that blue represents millions of dollars and countless jobs and so it's sort of comical how you think that you've made a choice that exempts you from the fashion industry when, in fact, you're wearing the sweater that was selected for you by the people in this room. From a pile of stuff."

Or you could consider that the rag trade is one of the biggest industries remaining in the US, and is also the easiest way into industrialization for under-developed economies.

Perhaps this will resonate: in every dystopian movie ever made the first way we know that the society depicted is repressive and soul-crushing is that the population is all dressed alike. (Usually in jumpsuits. What's up with that?)

You have a signature look, and that's fine, but it is a fine line between having a signature look and dressing like a cartoon character. Style is timeless, and fashion changes, but both can be fun. Once one are past the notion that clothing is worn solely to cover our nakedness and provide us with pockets the opportunities for creative self-expression open up, and the clothes we put on our back become something to enjoy-- a source of delight. We could eat nothing but porridge, but what a beak existence that would be. I like oatmeal fine, but I don't have it every day, and I don't want to dress like a bowl of oatmeal.

And I am very glad that the people I look at don't dress like that either.

"once one is". Editing on the fly.

The LAST time I ever ceded to fashion, I bought two polyester suits. Never again!