:: We've had "Stuff White People Like", and we've had "Stuff Nobody Likes", so of course next up is pretty obvious, isn't it? Stuff God Hates. The idea of a sarcastic blog written by God just strikes me as terribly funny.

:: I had this bookmarked for use a few weeks ago, but then I had to reinstall stuff and lost the link until I remembered it just now. I don't remember where I first saw it, so I can't properly credit anyone, but somebody's blogging Things that are younger than John McCain.

You know, I really try not to be "ageist", because I know plenty of people of advanced age who are amazingly bright and competent, but there's just something about John McCain that makes me think that his Presidency would largely consist of him sitting on a rocking chair on the Truman Balcony, throwing empty cans at the kids who stop outside his fence to gawk at the fancy white house he lives in and talking about how his knee's hurtin' so there's probably gonna be some weather. (And yes, I'd think the exact same thing about the Democratic nominee if we were running, oh, Robert Byrd for President. Maybe moreso. If McCain were a young and robust 40-something, running on the exact same set of ideas, I'd still be dead certain to not vote for him.)

:: Western New York's most recent brush with national news attention came last year when an inmate at a local jail, a hood named Ralph Phillips who goes by the nickname "Bucky", escaped from jail and then spent several months on the lam until he was finally caught. The whole thing was mildly entertaining for a while until he shot and killed a state trooper, and after that, the State Police wrapped things up pretty quickly. Now, Bucky Phillips is no longer in a local jail but in the one of New York's maximum security prisons. Well, there's a story in the Buffalo News this morning about his behavior since he's been sent to the Clinton Correctional Facility (somewhere in the Adirondacks), and the lede contains an item that made me go, "Huh-whuh?!" Here's that lede; let's see if any of my readers spots the same thing that stunned me:

Ralph ���������Bucky��������� Phillips, who fatally shot one state trooper and seriously wounded two others during the biggest manhunt in state history, is a troublesome prisoner who has been sanctioned nine times for inmate misconduct, including one incident involving explosives, state officials say.

Anyone else react the way I did?

And by the way, I'm looking at the picture of Bucky Phillips in the News story, and I'm struck by the fact that he looks eerily similar to the fellow who plays Jesus in some of the videos they use at my church for the Gospel readings. You be the judge: Bucky, or Jesus? 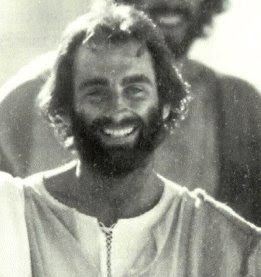 (The actor as Jesus is a fellow named Bruce Marchiano; I grabbed this picture from here. He's OK as Jesus, but I actually prefer the guy who plays him in the Gospel of John video they use in services where the reading comes from that particular book. That's Henry Ian Cusick, who can now be seen brooding his way through the lush scenery of LOST, along with everyone else on ABC's popular serial brood-fest. It's an interesting contrast between the two performances; you have a long-haired guy with a British accent doing Jesus with a strong mystical bent, versus an American with thick but not-terribly-long hair doing Jesus-as-smiling-best-friend. I don't have a problem with the latter, per se, but just for watching the thing, I prefer the former.)

More next week, as always.

scrawled here by Kelly Sedinger at 10:49 AM