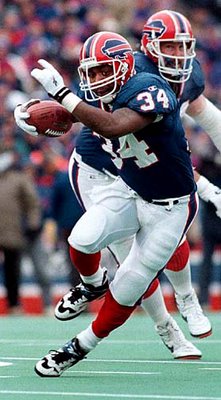 This year marked Thurman Thomas's first year of eligibility for the Pro Football Hall of Fame. He didn't get in.

I'm trying to not be annoyed by this. Really. I'm not being very successful.

The fact is that only a quarter of the guys in the Hall have been voted in on their very first ballots. And that is almost certainly because only six people can be inducted per year, so when you have years like this year's when the class of newly eligible players is unusually strong, some guys are going to be left out in the cold for another year.

So I get the necessity: not everybody who was eligible this year could go in. That's the "happy face" that's being put on Thomas's exclusion for this year: "Oh, he'll get in for sure, so don't worry. We'll induct six more guys in 2007, and in 2008. Thurman Thomas will get into the Hall. Bet on it."

I'd be fine with that. Grudgingly, yes, but I'd be fine with it -- if not for the condescending "Jim Brown" argument, that roughly states that "Sure, Thomas is a HoF guy, but the first ballot is for the greatest of the great -- that's when you induct Emmitt Smith, Jim Brown, and the very best players ever at their position. Thomas was a great one, but not that great. So he needs to wait a while." This is complete crap.

First of all, it's the Hall of Fame, not the Hall of Stats, and as many are saying today, either you are a HoF guy, or you're not. If you have an unusually rich class for the Hall, and you need to use some kind of yardstick by which to decide which guys to induct and which to make wait another year, that might be OK, but now I'm looking at the guys who actually did get in this year:

I'll admit up front that I don't know anything about Carson and Wright, so it's possible that they were better at their positions than Thomas was at his. I also won't quibble one bit with Reggie White, who was an astonishing player. (I liked him a lot less when he turned out to be a homophobic creep, but that has nothing to do with football.) I'm even all for inducting John Madden, who was a very good coach in his day and who I think deserves induction on the basis of his broadcasting work. (My wife hates his voice, but I've always kind of liked Madden, and I've liked him even more since he's worked with Al Michaels and stopped using the "Coach's Clicker".)

So that leaves this year's two quarterbacks. Troy Aikman is probably a slam dunk, right? The guy won three Super Bowls in four years, and he was one of the league's best QBs until his career was cut short by concussions. But Warren Moon?

I liked Warren Moon a lot. So much, even, that I think he should be in the Hall of Fame. But does the logic applied to keeping Thurman Thomas out in his first year of eligibility really imply that Moon should be in, also in his first year of eligibility? Imagine that you walk up to a person who turns out to be a fairly knowledgable football fan, and that you ask this person to list the best running backs they've seen, followed by the best quarterbacks they've seen. I'd probably bet real money that our knowledgable football fan would mention Thurman Thomas on the running backs list well before they mentioned Warren Moon on the quarterbacks list. If Thurman Thomas doesn't get in because he wasn't one of the "Jim Brown"'s of the sport, how does Warren Moon get in? Does anybody think that Moon is one of the Joe Montana's of the game?

Obviously, one is either a HoF'er or one is not. Equally obviously, the rules for induction are going to leave guys who should be in out in the cold for longer than they should be. But if one is going to use some kind of half-assed metric to justify one player's exclusion, they'd better be prepared to explain why they didn't use that same metric against another player's induction.
scrawled here by Kelly Sedinger at 12:02 PM

wow,,,you wouldnt believe it if i told you who i was but boy did you hit the nail on the head with the comparison to moon on the qb list as opposed to thurman on the rb list...great job

youd be suprised if i told you who i was but its amazing i have used that same comparison of thomas to moon on a rating list...name 20 great running backs then name 20 great qbs. moon wouldnt get mentioned till around 55....if he's lucky