All funerals, all the time

The indestructible Mr. Jones weighs in on the Coretta King funeral, falling on the "Oh my God that was so rude of the Democrats to do that!" side. He also provides a quote by Jeff Greenfield that offers further tut-tutting about the whole thing, basically taking Democrats to task: "Do you do this at a funeral?"

Well, as Matthew Yglesias noted in the post of his that I quoted the other day, yes, you do, at a political figure's funeral. After all, I seem to recall an awful lot of celebration of conservatism during Ronald Reagan's funeral festivities (and those went on for an entire week).

But I also note that Greenfield mentions the Paul Wellstone memorial service in 2002, which has achieved a reputation amongst those on the Right as being almost a Nuremberg-style rally for Democrats. Now, Al Franken's not a non-partisan fellow, but he was actually present at the Wellstone Memorial, so I'm more inclined to take his word for it over, say, Peggy Noonan's or Rush Limbaugh's or whatever other right wing blowhard who was not at the Wellstone Memorial has to say on the subject.

But more to the point: I don't give a shit.

Seriously. I no longer care what the Right thinks about the funeral decorum of the Democrats -- especially when their outrage is focused on a handful of remarks uttered at a highly emotional three hour memorial (Wellstone's), or a six hour funeral (King's) that takes place in a black church -- not a place you'd ever associate with quiet, reserved rhetoric or preaching, anyhow.

How seriously do the Republicans take decorum and manners, anyway? Let's take a tour of some recent examples. First, there was the time the Vice President of the United States attended a memorial service for the 60th anniversary of the liberation of Auschwitz. That's a pretty solemn affair...and yet, here's how our VP dressed for the event: 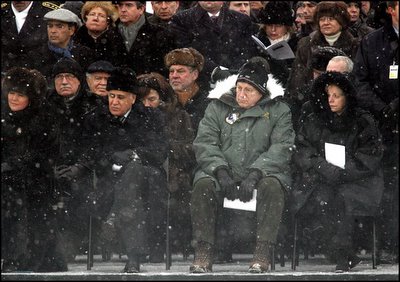 Well, my Rude-o-Meter is clicking. How about yours?

It wasn't a funeral, but how did just about all of the Republicans in the United States Senate show their politeness on the occasion of Senator Tom Daschle's farewell address to that body? By not attending at all. Contrast that with the number of Democrats present at Bob Dole's Senate farewell. Good thing the Republicans are around to tell us all what proper manners are.

And I'd really like to know why Democrats don't make national commercials to make people aware of things like the recent CPAC rally, an event attended by the VP, the Chair of the RNC, the Senate Majority Leader, and more, at which Ann Coulter was apparently cheered when she spoke of "ragheads". Of course, Coulter's racist kind of schtick is to be excused as just "Ann being Ann", but "Oh my God, heaven forbid anyone say anything Democratic at a prominent Democrat's funeral!" Somebody open a window.

These are the people who are so constantly shrieking about Democratic "manners". Referring to wiretapping and WMDs at the funeral for one of the left's most honored voices is beyond the pale, but having the most powerful Republicans in the country present at an event where speakers refer to "ragheads" and where t-shirts reading "Happiness is Hillary's face on a milk carton" are just good, clean fun. OK.

Of course, deconstructing Democratic behavior at funerals is nothing new -- Rush Limbaugh had a great time with a five-second video clip of Bill Clinton daring to chuckle after Ron Brown's funeral in 1996. This is, apparently, still an accepted truth on the Right, where the inner workings of Democratic souls are open for all to see, apparently.

In his post, the indestructible Mr. Jones refers to the Democrats as basically a party of cry-babies. How it is that he is so deaf to Republican crying and whining, I don't know.

(And by the way, I have very little respect for anyone who would actually pull the lever in the voting booth on the basis of who was polite to whom at some funeral. Give me a break. I'd also note the irony in the Right running at full-tilt to condemn the politicization of the dead, so soon after the same Right has also run full-tile to politicize the nearly dead.)
scrawled here by Kelly Sedinger at 7:09 PM