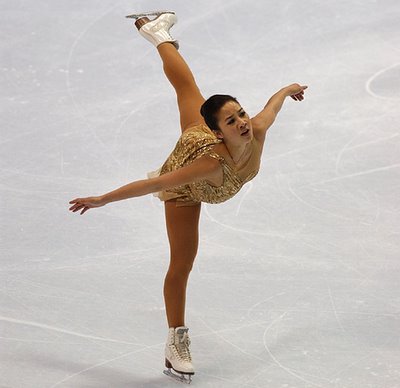 See you on the pro tour, Michelle Kwan -- and thanks for the memories.

On the subject of Kwan not winning Olympic Gold: maybe it's the Bills fan in me, but I do believe that being second best for a really long time might just be more memorable than being best just once. You never hear from Oksana Baiul or Tara Lipinski anymore, and Sarah Hughes hasn't been very "high profile" either. Kwan's been a mainstay for twelve years.

Olympic Gold might be the most high profile achievement in figure skating, but since it's only done every four years, it isn't exactly the Super Bowl of figure skating. That would be the World Championships, and there have been many great, great skaters who never won Olympic Gold, for whatever reason -- maybe they peaked in between Olympics, maybe they just came up short in their one chance, or whatever. Todd Eldridge, Kurt Browning, Nancy Kerrigan, Surya Bonaly, and more -- all great skaters, none of them Olympic gold medalists.
scrawled here by Kelly Sedinger at 8:38 PM