From the Books: WORLD OF WONDERS by Aimee Nezhukumatathil 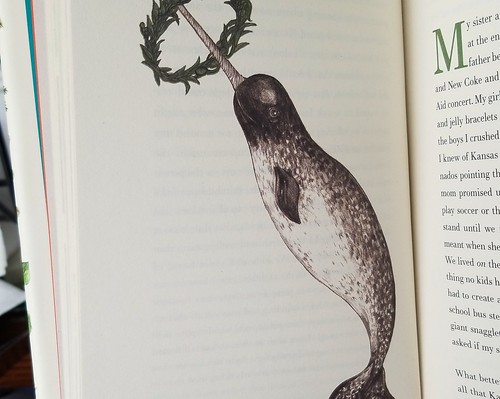 From summer 1976 to summer 1977, my family lived in LaCrosse, Wisconsin while my father taught at the university there. That school year I was in kindergarten, while my sister was in...sixth grade, I think? My memories of LaCrosse aren't grounded by very many specifics these days, but there are things I remember of that year. I remember a couple of the pizza places we went to: one was Rocky Rococo's, and the other...wasn't. There was a bar and restaurant called Schmidty's that I vaguely recall serving a pork chop on a steel serving plate, which I thought was really cool. I also vaguely recall my father jokingly calling that place "Shitty's" because he always did like a funny rhyme, though he and my mother were less amused by me trying that same joke on for size. Bummer! Swear words are fun!

I also recall one morning when we were gearing up for one of our usual Saturday (I assume it was a Saturday) road trips. A fixture of my childhood was all of us getting in the car and driving someplace an hour or two away, seeing what was there for a bit, and then coming home, usually with a stop at some tavern someplace for dinner. On this morning, I asked my mother where we were going, and she said, "Iowa!" I had no idea what "Iowa" was; remember, I was five years old and pretty hazy on the concept of states and stuff. I don't remember what we saw that day on our drive to Iowa, but that was the first time Iowa was ever on my radar. Maybe we went to Dubuque? I don't know.

I think back on that day, though, and I realize that as a kindergartner was hanging out with his parents, about a hundred seventy miles or so west there was a first grade girl hanging out with her parents, and that thirteen years or so later, that girl would meet that kindergartner in college, and a year after that, he'd ask her to go see a movie with him (Edward Scissorhands), and fast-forwarding to today, as that onetime kindergartner writes this very post, she's taking measurements for a new bed for one of our dogs. We grew up worlds apart, but then there was this one period when we weren't that far from each other. Just a few hours' drive apart, for that one day. Later in summer '77, we'd move to Hillsboro, Oregon...and a couple years after that, to Allegany, NY. That young girl I'd marry was a couple thousand miles thataway...and then she was a thousand or so miles thataway. Until finally the thataways converged, and we were together, hoping for as few thataways as possible.

I've been thinking about this a lot, after reading this passage from Aimee Nezhukumatathil's remarkable book World of Wonders: In Praise of Fireflies, Whale Sharks, and Other Astonishments. At this point, Nezhukumatathil is in sixth grade, living in Kansas with her family through a year she doesn't seem to have enjoyed very much:

I could not have known that just one hour south of Larned State Hospital the person I would eventually marry, the father of my sons, was likely practicing layups in his driveway or hitting baseballs into a field not too far from a buffalo range. Just one hour from my life's love! One hour! A white boy who would one day take my brown hand in his, putting it to his heart when he makes a promise so I can feel his heartbeat and the warmth residing there. If only the narwhal could have taught me how to listen for those clicks of connection, that echo reverberating back to me.

Wait, you might be asking. What's this about a narwhal?

The book is called World of Wonders, and as I flipped through it in the bookstore where I found it (a brand new bookstore in Ithaca that is one of the most beautiful little bookstores I've ever seen and had the terrible luck of opening as the COVID pandemic was apparently shutting down the world), I figured it for a poetical look at a quirky selection of the world's creatures, quirky and poetic. And it is certainly that, as Nezhukumatathil is a poet by vocation. But more than that, Nezhukumatathil uses all of these amazing creatures of the world as metaphorical gateways to discuss her personal biography and her experiences in the world.

Nezhukumatathil, being a poet, writes with language that is beguiling and lyrical. The book has the feel of being one long prose poem. Here she is on fireflies:

For a beetle, fireflies live long and full lives--around two years--though most of it is spent underground, gloriously eating and sleeping to their hearts' content. When we see these beacons flashing their lights, they usually have only one or two weeks left to live. Learning this as a child--I could often be found walking slowly along untrimmed lawns, stalling and not quite ready to go inside for dinner--made me melancholy, even in the face of their brilliance. I couldn't believe something so full of light would be gone so soon.

One aspect of Nezhukumatathil's life to which I can relate is moving a lot as a young person, but I cannot relate to her experiences as a person of color living in all these rural American locations. I can, though, readily envision the kind of experiences she had. There was an Indian family that moved to my town when I was a senior in high school, and one of their daughters (I think there were at least two kids in that family) was in my class, for all of one year. She was an incredibly smart and very nice (and, I might add, beautiful) person who was very well read; her favorite book was The Great Gatsby, which I myself read that year for the first time. She and I had some discussions on that book that I remember fondly. But some other things, I remember less fondly. As the year began to dwindle and as graduation neared, it was time for the yearly academic awards, and she won a bunch of them. Some of my classmates--all of them as white as anything--groused in the quieter moments of study halls that "Why should she get all the awards, she only came to town that year, she'd be gone soon, she was an outsider." This at the time reminded me of my sister's experience six years earlier in the exact same school district, when we'd moved in when she was a junior and she proceeded to win a lot of academic accolades. But of course her experience couldn't possibly map to Shazia's (that was her name), because Shazia had the added hurdle of moving to small-town rural Western New York as a person of color.

Throughout World of Wonders, Nezhukumatathil occasionally makes glancing reference to time she lived in Western New York. I had no idea of this when I bought the book, but it caught my attention. But when the subject comes up, it's a very quick mention, gone as quick as it comes, and I wondered if Nezhukumatathil had a bad experience here. I wondered where she lived in WNY, and how much of her experience here I would recognize, even as the person watching it unfold instead of living it. Late in the book, though, Nezhukumatathil names her town: Gowanda, NY. I know the town. It's a small village in the hilly country between Erie and Cattaraugus Counties, a very beautiful area that I value highly for its hills and valleys and gorges and streams and waterfalls. But Nezhukumatathil writes of a single year there, and I think back on my classmate Shazia.

Later, Nezhukumatathil writes of living in Western New York, during her chapter on the red-spotted newt:

These newts are one of the only amphibians to contain a ferromagentic mineral in their bodies, and that, combined with their incredible capacity to memorize sun and starlight patterns to return to their original pond waters, make them an animal on par with salmon for their excellent homing capabilities. What's particularly amazing is that in its lifetime--thanks to its innate magnetic compass--a newt doesn't usually stray farther than just over a mile from its origins pond, staying within the range of about eighteen football fields.

My own homing instinct was stronger than I ever could have thought. A decade after I left Western New York as a teenager, I was finishing up a fellowship year in Madison, Wisconsin. I scanned the academic job boards for entry-level professorships and had to blink twice when I saw there was an opening not too far from my old home. It was a long shot, I knew, but I applied anyway, even as I drove around to local bookstores and coffeehouses in Madison to apply for jobs there. Coffee barista, English professor--I felt guilty for even daring to hope I could land a tenure-track job--all I knew was that I wanted to stay in the classroom, but I also wanted to be able to spend time outdoors and write.

After a few days' worth of interviews, I received the magical call welcoming me back, and I spent fifteen more years in Western New York. I was married there. My babies were born there. But it wasn't my forever home. Though we still keep in touch, my best friends had long since moved away. I was still one of too few brown people in town. I was tired of acquaintances at the post office asking about "my people," meaning Filipinos or Indians; tired of people saying Namaste! to me in the grocery store, when I was least prepared for it; tired of the increasingly hostile climate at work if I dared to suggest more diversity on campus; and simply tired of being the one brown friend to so many people. On top of that, I spent fifteen winters navigating roads clogged with lake-effect snow. I was done with that pond. I would need to keep searching.

Everyone has to find their own home, their own place to belong. Nevertheless, it makes me a little sad that the place that's my home, my place to belong, wasn't someone else's. A bit selfishly, I mourn that my region had for a time someone living here who is capable of writing a book like World of Wonders...but for this reason or that, she felt that she couldn't really live here. This happens for a lot of reasons, not all of them bad...but still. A place is a bit sadder when it says farewell to its poets, and a bit sadder than that when it doesn't even realize its poets have left.

Anyway, World of Wonders is a beautiful book.
scrawled here by Kelly Sedinger at 2:52 PM

Email ThisBlogThis!Share to TwitterShare to FacebookShare to Pinterest
Labels: 2021 reading, From the Books