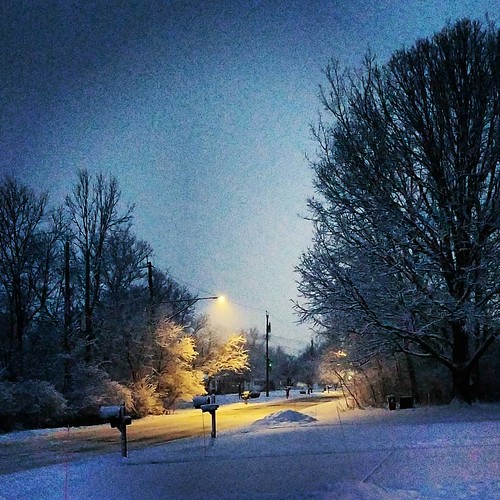 In old movies--especially the black-and-white noir films--you'll often see someone standing under a streetlight. In the movies the streetlights always cast a distinctive pool of light below, with a relatively sharp boundary between the light and the darkness beyond. In reality, though, streetlights haven't been like that for years, owing to the high-pressure sodium lamps used in modern streetlights. These lamps cast the familiar, ridiculously-bright light that spreads outward in all directions, fading at length.

Now, however, in the interests of energy efficiency, municipalities all over the country are switching from the high-pressure sodium lamps to energy-efficient LED fixtures. The LEDs really do cast distinctive pools of light below, with a relatively sharp boundary between the light and the darkness beyond. The light is a natural spectrum, thankfully, so the light doesn't feel false--in fact, it feels even less false than the brilliant burning amber of the old lamps.

One thing you discover with LEDs is that unless they are filtered through frosted glass or something similar, their light is extremely directional, which means that shadows made in LED light tend to be very sharp and accurate. This was driven home for me tonight, when we walked our dogs as snow fell from the sky. It was a peaceful night, no breeze, so the snow was able to just flutter down to the ground on its own time and agenda. These are my favorite kinds of nights to walk, during the wintertime...and tonight I noticed something else, when we passed beneath the first of the new streetlights on our street.

The snowpile sparkled like snow usually does--but there was something else. Tiny shadows of darkness, all flitting in the same direction across the snow on the ground. It took me a minute to realize that I was seeing something I had never seen before, something I had never thought to see before. I was seeing the shadows of the snowflakes themselves, snowflakes casting their own shadows on their already-fallen brethren. I never thought for the tiniest of seconds that a snowflake could cast its own shadow.

But it turns out they do. And that, my friends, is a bit of magic.

Just reading this description made me feel more at peace. The world makes sense sometimes, and sometimes it is beautiful. This blog entry is almost a poem.

Reading this made me feel more at peace. The world makes sense sometimes and sometimes it is beautiful. This blog entry is almost a poem.