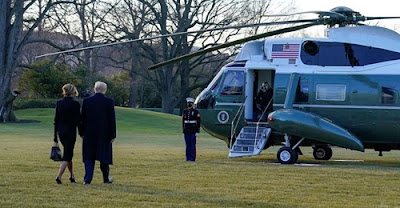 As I write this, you are still President, for another 47 minutes. I guess it's time to reflect a bit. Here's part of what I wrote to you four years ago today:

I do not support you, and I do not expect good things from you. I do not expect good policy choices, nor do I expect good outcomes. My expectations for you are astoundingly, confounding low, because that's where you put them. You did it by appealing, day in and day out, to the very worst instincts in the American psyche, right from your campaign's opening address when you warned us all about the steady stream and rapists and murderers surging into our country from across the Rio Grande.
You did it by lying day in and day out, so much that reporters had trouble figuring out how to report that you were lying. You lied so much that you were eventually lying about having lied in the first place. You ran the most dishonest presidential campaign I have ever seen, and yet somehow you managed to reap the benefit of an opponent whom most people seem to think is also a huge liar, even though she isn't.
You did it by cheering on the expulsion of people from your events of people who don't like you or who say things about you that you don't like.
You did it by several years ago making your first big claim to political fame by pursuing the stupid fiction that Barack Obama was not a natural-born American citizen.
You did it by showing on FOX News repeatedly to scoff at the very idea of global warming and climate change.
You did it with idiotic policy proposals like building a wall between the United States and Mexico, and then compounding this stupidity with the idea that Mexico will somehow be forced to pay for it.
You did it by filling your administration with people who are clearly on the take, people who are clearly going to make out like bandits, people who are obviously going to set to the tasks of destroying the missions of the agencies they are heading, and people who are simply downright ignorant (an Energy Secretary who didn't know what the department even does, or a HUD secretary who believes that the Egyptian pyramids are grain silos).
You lowered my expectations by attacking people left and right on Twitter, by egging on your bizarrely rabid followers, by threatening your opponent with investigations and prosecutions, and by scoffing at one's obligations as a citizen by saying "It makes you smart" that you managed to avoid paying income taxes at one point.
There is literally nothing you have said or done over the last eighteen months that gives me the smallest reason to think that you might be a good President. You have shown no curiosity about issues or insight into them. You have shown zero respect for the work of the job or the norms that surround it. You have demonstrated no foreign policy acumen aside from chest-thumping and Russo-philia. I can think of no issue that stands to improve for your having addressed it, and I can think of no aspect of American life that will be better for your having been President.
And the thing is? You're going to fail. No matter what. You're going to be able to do a lot of damage, and you'll ruin a lot of lives. Hell, if you and your cohorts in Congress repeal the ACA without a "replacement" (and let's be honest, none of you has the slightest idea what kind of "replacement" you'll offer), you might just kill people. But it won't matter. Not in the long-run, it won't. You're not going to reignite American manufacturing so that towns once more have big factories employing ten thousand people. You're not going to be able to push all of the queer people back into their respective closets. You're not going to make the young people like you.
Ultimately, though, I don't even think you care that much, and that may bother me most of all. You seem to expect the Presidency to be this easy thing that you can almost do on a part-time basis, and that your business experience is one hundred percent applicable to the challenges you will confront as President. As to the latter, your business experience isn't the unbroken run of amazing success stories that you often say it is, and that experience is not always applicable. What might be OK in a board room is not OK in a cabinet meeting.
In short, I expect your Presidency to be a time of awful policy making combined with amazing levels of corruption. The last administration that paired deep disengagement in policy and facts with willingness to profit from events did not result in good results. Your judicial appointees will be terrible people, and our Congress will rubber-stamp your stuff and you'll rubber-stamp their stuff. The idea of national government in the hands of you, Paul Ryan, and Mitch McConnell fills me with many emotions, none of them happy and most of them angry.

Not only was none of this wrong, you somehow managed to be even worse than I expected. I expected George W. Bush levels of incompetence, disengagement, and bad policy, but not only did you manage to crank up the settings on all of those, you added to the mix a casual type of cruelty that wasn't terribly surprising, but it was still unnerving. You seemed to take actual delight in the sufferings of the American people whom you were elected (if only by the deeply bizarre set-up we Americans have where someone with fewer votes can still be elected) to lead and serve.

I never had any expectation of you growing in office, but damned if you didn't seem to shrink to the occasion, each and every time. I knew that your general approach to policy would be terrible, and my only real hope was that things would somehow manage to not get super bad in America by the time we got our chance to vote you out.

Of course, this hope was in itself dangerous, since Americans don't tend to take a very long view of policy, which made it a very real risk that we'd hit 2020 with things just king of bubbling along, like they were for the first three years of your term, and Americans would look at the state of affairs and say, "Meh, he's doing OK, I guess." The inertia of history takes a long time to shift, and it often takes bad governance years to manifest in terrible results that hurt millions. Likewise, it takes good governance years to repair terrible results, which is where America often gets into trouble: we get frustrated when the Democratic Presidents we elect to get America out of the ditch that Republican Presidents like you steered it into don't quite get the job done in 18 months, and then we fill Congress with Republicans who have zero investment in doing anything other than keeping us in the ditch.

But here we are: you put the country in a calamitous position, by pursuing things that were unimportant and ignoring things that were. You ignored the warnings about likely pandemics, and then when one actually arrived, you dithered and you dallied and you ignored experts who were telling you what you didn't want to hear and you installed charlatans who told you what you did, and now here we are, four hundred thousand deaths and counting later, and we're a country that can't get on the same page about something so simple as wearing masks to protect each other.

No, you didn't create the climate in America, but you took advantage of it and you poured gas on its embers and fanned the flames at every opportunity you had. You used the power of your office in the most brazenly and transparently transactional way probably in history, and what of that? You're still heading off to face all manner of legal troubles, and the idea of anyone giving you giant sums of money to build some tall building someplace is laughable. (Maybe Boise will try; you could end up with Trump Tower Boise being the tallest building there, but then, in Boise, twenty floors will get it done.) You gave your ear to the Stephen Millers, Steve Bannons, Seb Gorkas, and Michael Caputos of the world. I expected your administration to be a Rogue's Gallery of the worst people in America, and you certainly met that expectation, head-on.

Meanwhile, our country's economic inequality continues to grow, student loans continue to break the backs of millions, our infrastructure (which of all things I expected you to do something about, even if it was a half-assed grifting something) is still crumbling and well behind the rest of the world, and we have lost another four years that we didn't have to fight climate change. I am not exaggerating when I say that there is no aspect of American life that is better for your having touched it. Yours is a perverse kind of mirror universe Midas touch, in which everything with which you come in contact is either terrible to begin with or becomes terrible because you touched it.

Well, while there is still the enormous problem that many millions of Americans still support you, and that a significant portion of those do so on the basis of irrational nonsense conspiracy crap that wouldn't even make an interesting X-Files episode, I can still take comfort in the fact that of the many problems America is facing today and in days to come, one of them has been definitively addressed.

You, Mr. Trump, are no longer America's problem. May the wind be forever in your face, and may the road crumble before you with each step you take.

--An American citizen who has no more time or inclination to think about you at all.

amen. He NEVER figured out how to be PRESIDENT. I saw Bill, Geo W, and Barack at the end of that 90-minute thing last night. I disagreed strongly with W but he's a fine ex-Prez. Orange never stopped being a petulant child.