Back Roads of WNY 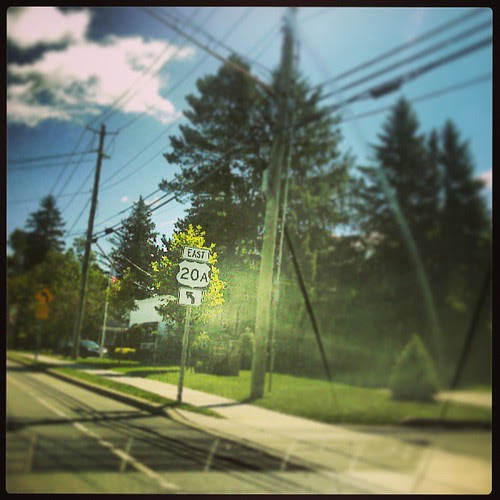 I'm pretty sure that I inherited from my father a general sense of antipathy for expressways. When we'd take long roadtrips, when I was a kid, such as going from our home in Allegany, NY to New Jersey (near Philadelphia) to visit my grandmother, we would often take some route through Pennsylvania that was almost entirely 2-lane roads, sometimes feeling like a lot of over-hill-and-over-dale. A lot of times back then I'd wonder why we just didn't take the Interstates and get there faster, and it wasn't until much later that I realized that Interstates are boring. Except for freeways in cities, which are cool, expressways are just a whole lot of dull. So it's come that I, too, look for alternate routes that might make a trip take a bit longer, but also makes the drive more pleasant, more adventurous. Expressways are designed to take you past places, which is why they're always built in the really boring stretches of land. It's always amazing to me that some roads can spend a great deal of their length within just a few miles of the thruway, and yet the driving experience is so starkly different.

The main routes out of Buffalo, for just about any location, are either Interstate 90 (going east or west) or US 219 (going south). Both of these routes are really boring drives. US 219 is only a thruway for about twenty miles; just south of Springville it's two-lane all the way to PA. And that two-lane stretch can be very nice in a few spots, but that road has become such a main route south that I just find the whole thing rather boring. As for I-90, well...it's I-90. Mile after mile after mile of boring, flat road. (Which is also a toll road, another reason why I avoid it like the plague.) So here are some of my favorite roads!

US 20A: Orchard Park to Canandaigua. This is, by far, my favorite road just about anywhere. (The main road through Yellowstone may outrank it.) It's a hilly road through mostly rural areas, and in the space of about ninety minutes driving it you go from the longer rises and falls in Erie County to the much hillier terrain of the Finger Lakes region. In fall, this drive is amazing. We take this road most times on our annual fall getaway, since the road ends near Canandaigua, NY, southwest of Rochester and a few miles from Victor, NY, where we like to stay overnight. Notable feature: the steep descent into, and ascent out of, Warsaw, NY. The road is so steep here that trucks are required to exit the road and take an alternate route.

NY 39: Springville to Geneseo. Route 39 actually runs from US 20 near Dunkirk all the way to Avon, NY (a small town about fifteen miles outside of Rochester), but I'm only familiar with the part between Springville and Geneseo. It's another hilly, gorgeous ride, especially between Springville and Yorkshire, when it closely tracks Cattaraugus Creek. I don't take this road often as we're rarely in a position to go east or west from Springville. But this is another wonderful trek through rural NY. We just drove this the other day, and it was refreshing to see new stuff! Notable feature: NY 39 parallels Letchworth State Park, and runs with US 20A for a short while near Geneseo.

NY 354: Buffalo to Attica. Also known as Clinton Street. I love this road in winter, because it runs along a lot of high ridges that give nice, long views of snowy fields with the lights of Buffalo in the distance. I drove this often when The Wife worked in Batavia. Not as often now, but I like to incorporate this road into return trips from Rochester. Notable feature: Nothing stands out, except the views. On a clear, cold winter night, particularly with a bright moon, this road is tops.

NY 98: Franklinville to Batavia. This road actually starts outside Great Valley in the Southern Tier and runs all the way to Lake Ontario, but the part I'm mostly familiar with is between Franklinville and Batavia. We mostly would end up on this road when traveling to Arcade, NY for a pancake breakfast every year during maple season. Another hilly rural route that goes more through farmland than forest, which makes for a different kind of drive. Also, as a north-south route, ascents and descents tend to be much longer, and there are a few spots where, on a really clear day, you can probably see the Buffalo skyline from the farthest possible vantage point short of being on a boat on Lake Erie. Notable feature: spectacular views of the huge wind farm along the north-south ridges, if you like wind turbines. (I do.)

NY 240: Orchard Park to Ashford. The roads I've described thus far are hilly routes; NY 240 is almost exclusively a valley road, and it's a nice alternative to the "usual" routes from Buffalo to the Southern Tier, US 219 and NY 16. Route 240 runs through a fairly narrow series of valleys, past a couple of Erie County's main ski resorts, and follows the rushing waters of Cazenovia Creek's West Branch. There is an abandoned rail line along the route that is the focus of a possible rails-to-trails project. It's also a surprisingly twisting road, so if curves are your thing, this may be the road for you. South of Springville, if memory serves, the road is notably rougher than its northern half. NY 240 actually comprises all of Harlem Road in Buffalo, so it actually connects Amherst to Ashford. Additionally, 240 is the main drag through Orchard Park, and The Store lies on 240. So this is one of the roads my life centers around! But the part south of OP is a very nice drive. Notable feature: Mill Rd, between 240 and East Aurora, is a nice short drive that includes the wonderful Mill Rd. Overlook, a spot where the road is at the top of a bare hill facing north. The view is only spoiled by, ironically enough, a big sign exhorting people to "Save this view!" (They want to prevent someone from buying the large field there and turning it into yet another development clogged with McMansions.)

NY 16: Buffalo to the PA State line, south of Olean. This is actually one of the main routes from Buffalo to the Southern Tier, but I'm listing it anyway because it has a pretty unique character all its own. The road actually goes all the way to downtown Buffalo, but for my purposes, it's notable for being the main drag through East Aurora and a decent connector to the Olean area (where The Parents still reside). It's also a fairly pretty drive, too, especially in fall when you start getting into the hilly regions. Most notable for me about NY 16, though, is that of all these roads, it's on 16 that I get the strongest sense of New York on the wane. All the other roads have old stuff along their ways, but for some reason, everything along NY 16 feels older, and much more distant from the days when some of these places were a going concern. I just drove this road the other day, and I noticed at one point a building whose business had long-since closed, and at the road there was a onetime illuminated sign. The signage itself was gone, but the frame of the sign was intact, with the lightbulbs still there. There's an old surplus store in a town called Machias that's been closed for a while, but the huge banners advertising Carhartt apparel are still stapled to the storefront. All of these roads have, to some degree, a "days gone by" feel, but NY 16 is the road that most feels like Time has won the battle.

Obviously this has been Southtowns-centric and mainly focused on roads going either south or east from this region, because those are the directions we mostly find ourselves traveling. But what others are out there? What roads do you folks like?

My sister lived in Ottawa for twenty years, and I'd drive up there several times a year for a visit. The Expressway route was very slightly shorter (in time, not in total distance), but I'd arrive having to pry my hands off the steering wheel. The longer (time not distance) drive was much more enjoyable.

I wanted to note that on 77 between Darien and Bennington you can get a glimpse of downtown Buffalo as well.

It's a short stretch, but I enjoy driving Oatka Trail. It heads east from 19 just north of LeRoy and closely follows the creek. Also in that area I like East River Rd, starting in Genesee Valley Park, going south past RIT, and all the way to Avon where you can check out where they make Barilla pasta.

I also like 18 along Lake Ontario, trying to catch a glimpse of Toronto on a clear day. Although once you're east of Webster I find most of the roads north of the 90 to be depressing... it's so flat, especially the closer you are to the Montezuma wildlife refuge. Of course one should suffer through it to get to Chimney Bluffs at least once.

For that reason I really like 14 from Geneva to Watkins Glen, stopping at Mr. Twistee's for custard on the way.

However for the ultimate hilly, scenic drive, nothing in the area tops the network of roads between Branchport (on Keuka Lake) and Naples. Going westbound you start on Italy Hill Rd, turn right on Italy Turnpike, then left on Italy Valley. Take it until it ends, turn right, and spend some time appreciating the purple fire hydrants in Naples (they grow grapes, get it?). Also, if you're out that way, north of Naples at the intersection of 21 and 64 is one of our favourite restaurants, Brown Hound Bistro. It's probably only 15-20 minutes south of where 20A hits 64.

Interesting comment about the roads east of Webster...I like 104 a lot, actually; it's always our return route to Rochester after our yearly trip to the Sterling Renaissance Festival. I'll take the expressways through Rochester -- like I said, I enjoy expressways in cities -- and I'll take 490 all the way to LeRoy, and then go back to my two-lane bliss.

Paul: I agree. This summer we took expressways all the way to our vacation in Cape May, NJ, and The Wife and I (we took two cars, so we both drove) were all jangly in the brainpan when we arrived. I've already been plotting two-lane routes for next time. (In fairness, the WORST parts were in PA. New Jersey actually has its shit together, expressway-wise.)