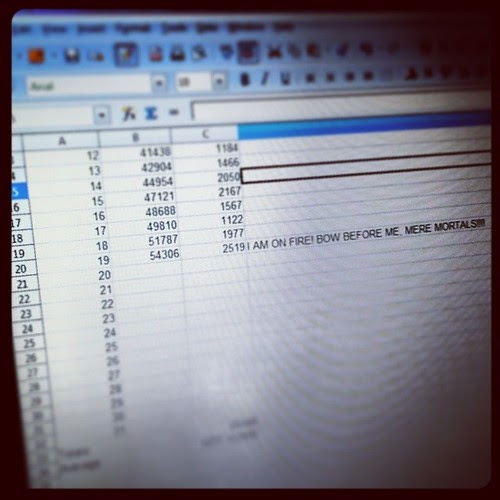 The current book, GhostCop (not the actual title), really gave me some fits toward the end of last month and the beginning of this one. The story reached a point where I had no idea what was coming next, and what was coming next refused to reveal itself. So I had an uncomfortably large number of days where I didn't write a single word.

But as you can tell by my tracking spreadsheet, I broke through quite nicely, finally figuring out the direction that most of the story elements need to go. My main problem now is that I really wanted to get this draft done in time for NaNoWriMo, but I'm not sure that's in the cards right now. That being the case, I will likely keep writing this one until it's done, even if that leads into NaNoWriMo, at which point I will casually segue into Lighthouse Boy (not the actual title).

Sometimes this writing thing is hard. Maybe it would be easier if I bothered outlining or plotting things in advance in some way, but the notion of doing that really bugs me, for some reason. I'm just not wired to stick to an outline.

I am wired, however, to keep writing until the day I drop. Excelsior! Onward and upward! Zap! Pow!!

One word after another. That's the only way. Keep on puttin' those words down, my friend. That's the first commandment: First you must write.

I should take my own advice. I've got a lot of stories, novellas and one novel sitting unfinished. That's the second commandment of writing -- finish what you write!

Again I wish you lots of success, but if - big if - I were ever to write long form as you are, I would have an outline.