A writing update, an apology for a lack of nifty content, and a cool photo!

In order, the things mentioned in the title to this post:

Starting about halfway through September, I entered a protracted slump, wherein I had a terrible time figuring out what was supposed to happen in GhostCop (not the actual title). So severe was this slump that I actually failed to write a single word for 10 of the last 14 days of that month, including the entire final week. It was a disaster, which put me really far behind where I wanted to be; I was hoping to have the draft of this novel done by the time November rolled around, so I could so into NaNoWriMo with a totally new project (actually, an old one: I'm returning to work on Lighthouse Boy).

The malaise continued into October (partly abetted by my vacation last week). But during that stretch, I started to see glimmers of a possible resolution to my story's difficulties, and now, I seem to be back on track. Eight of the last nine days I've managed to write over 1000 words, the last two days I've written over 2000 words, and even that one "off" day saw 700 words, which is acceptable. Will I get the draft done by NaNoWriMo? I...don't know. I do know that this book is going to be significantly shorter than Princesses In SPACE!!! or Lighthouse Boy, but I'm really not sure how long it will be in the end. But I have more than two weeks left this month, and if I can keep cranking, who knows...maybe I can at least get to the point where I can finish it in the first part of NaNoWriMo. We shall see.

It's tough, though, when the mojo goes away.

Yeah...sorry about that. I'm hoping to get more good stuff done here, by way of writing posts beforehand and scheduling them. But I've been really pushing forward on GhostCop, so I can make no promises. I'm going to try to have something up here on a regular basis, even if it's not of "penetrating essay" quality.

This is amazing. I saw this on Twitter today, via a user named Usman Masood. The photo: 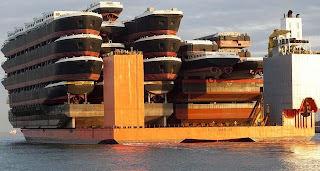 How awesome is that!

Thanks for stopping by, and stay classy, San Diego!

Have you read No Plot, No Problem? It was very helpful to me, even though most writers have tried some of the techniques. Last year, I started with a pair of shoes, a dog and a dead guy. In 2010, I only had a plane crash, a 10yo kid and a police chief. I feel like I'm cheating this year with my plan to write some short stories in the same universe as those novels and with some details already planned.
-Mark C