This weekend The Wife and I made our annual getaway to the Ithaca Apple Harvest Festival, and we had a great time as always...although the festival itself wasn't quite like it usually is, owing to the fact that Ithaca is in the midst of tearing apart its pedestrian mall to rebuild it (in truth, the infrastructure there was looking a bit long in the tooth, and I look forward to seeing what things look like when it's done). I know that pedestrian malls aren't thought of very highly anymore, but Ithaca is a small enough city that they are able to pull it off -- it's all of three blocks, and there's plenty of parking and lots of nice businesses to frequent.

Anyway, it all started with a trip to a knitting supply store just outside of town, which is one of the nicer yarn shops we've found in our travels of such. The Wife ended up with a small pile of yarn to add to her stash: 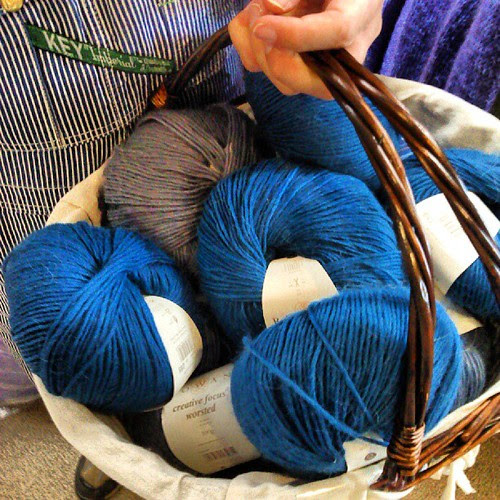 Then we were off to downtown, where our first order of business was lunch at Waffle Frolic, a restaurant that we absolutely adore. This is their counter. 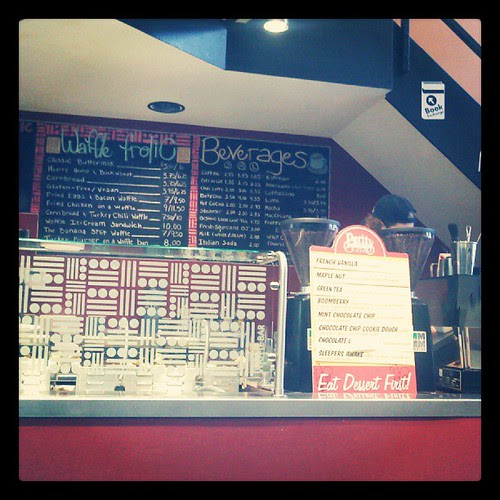 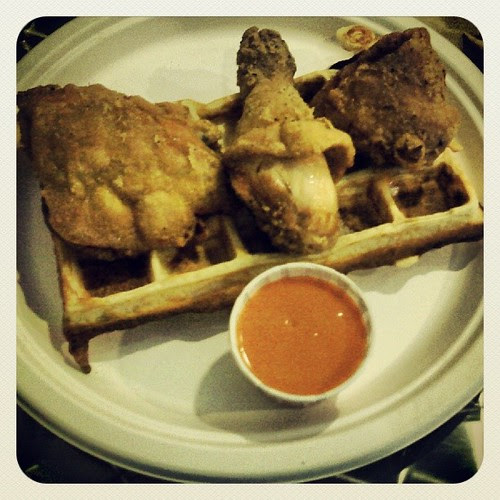 Next was some shopping and milling about. As I said, the Festival usually takes up the entire pedestrian mall, but this time it was sequestered mostly to either end of the mall, so there was more walking than usual, which was fine. There's food and lots of crafts, with a great deal of stuff available that is made by local or regional artisans. I am increasingly a fan of buying things that are locally made, and if I can buy it directly from the person who made it, then that's fantastic.

Now this was funny. There's a comics store there that I usually go into, more to find something to bring back for The Daughter than for myself (I love comics, but I find that they tend to be wildly overpriced, which is why I tend to exclusively rely on the library for comics reading). Looking through the wares, I found a case with some toys and action figures and the like inside, and on top was this giant model of the starship Enterprise, in my favorite design that ship has ever sported: 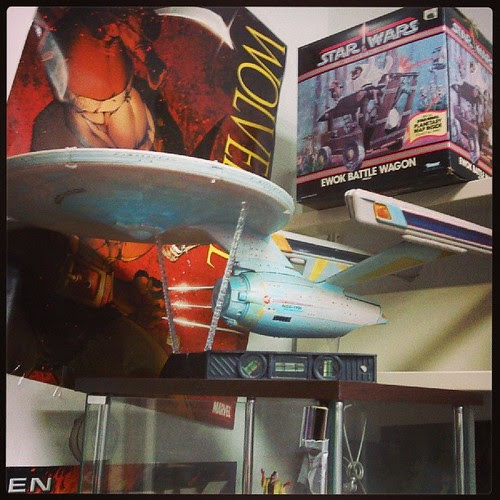 As soon as I took the photo, though, the owner was right there to give me a tongue-lashing for taking photos in his shop. He went on some rant about the need to control or limit the technology, now that everyone has access to photography. I honestly did not understand the point he was making -- is he worried about people using iPhone cameras to scan comics pages in his store so that they don't have to buy the comics? It's not like any of the stuff in there is his intellectual property, and besides, many times I've chosen to go into a business or store because someone posted a picture from within and said, "Check out the cool stuff this store has!" Weird. He also pointed to the "No photographs!" sign that maybe I should have seen...but the sign is above the door in the back of the store that leads to their back room, it's about the size of an index card, and it's taped to a wall that is also covered with all manner of comics-related posters and artwork. I offered to delete the photo, but he said that wasn't necessary. I bought a little TARDIS for The Daughter -- it has a little light on top -- but I think I'll be foregoing that shop in future trips to Ithaca. If he doesn't want word getting out that he has cool shit in his store, then I'm happy to oblige.

On a happier note, the lack of pedestrian traffic in usual areas meant that I got to actually get up close to one of the Sagan Planet Walk markers! This is a public art installation in Ithaca, honoring the memory of Carl Sagan (one of my eternal heroes), in which stone markers are placed throughout the town in such a way as to constitute a walking tour of the Solar System, with the distances between the markers proportionally accurate to the distances between the planetary orbits. According to the website for the Planet Walk (associated with the Ithaca Sciencenter), the markers for the Sun, Mercury, Venus, Earth, and Mars are in temporary storage (with temporary signage indicating their location, so that the Planet Walk is still possible). But I got to pose with Jupiter. Yay, Jupiter! 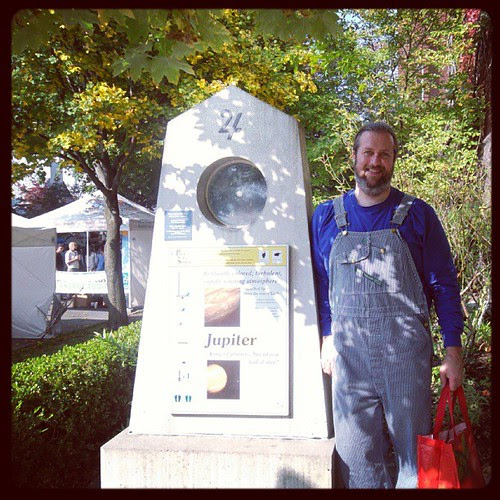 Finally, I visited my favorite used bookstore, Autumn Leaves. I only bought a couple of books this time -- I'm trying to cut down my book acquisition until such time as we acquire more space for book storage, which will involve moving -- but I always love going in that store. It's bright and open and airy and inviting. And in their storefront window, they had a mannequin, attired thusly: 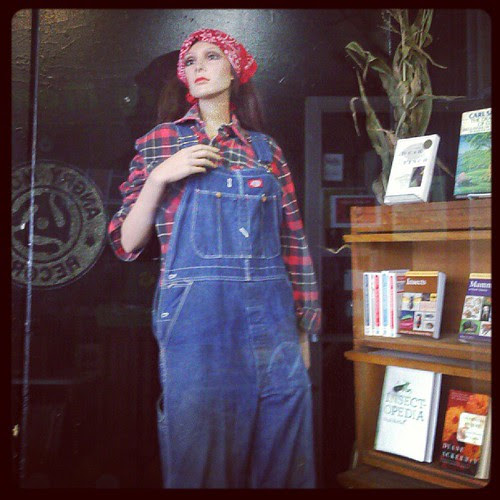 All in all, a lovely trip, and I'm sad it's over. There are two places I'd like to live on this world, other than right here. One is Toronto. The other is Ithaca!

Looks like a pleasant time indeed... the Planet Walk sounds like a very cool attraction. I had no idea there was such a thing (I assume Sagan is from Ithaca?). Shame the comic-store owner was a dick.

One question: how do you actually eat the chicken 'n' waffles? Since the chicken is on the bone, I mean? Do you tear off some chicken flesh and spear it together with some waffle, or eat a bit of chicken and then a bit of waffle, or... ?