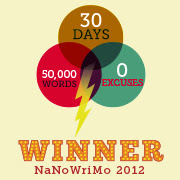 More thoughts on the whole NaNoWriMo experience to come, but for now, I have officially hit the 50000 word mark as counted by the NaNo verification thingie. (Oddly, according to Google Docs's word-count feature, I actually have a few hundred more words than NaNo says I do, but they're the Official Scorers Of Record, so there it is. Fifty-thousand words in less than one month. Wow!

(Only thing is...I'm probably only about halfway through the actual story of Deliverance, eh? (not the actual title). Oh well...so even though a certain milepost is now behind me, the work continues. And I'm going to finish this one before I return to the next round of edits on Princesses In SPACE!!! (not the actual title). Wow, the life of a writer...and to think, as yet I'm not even paid to do this stuff!)

I know it's not a favorite of yours, but I quote Blade Runner: You've done a man's job, sir.

A congratulatory toast to you!

Too bad I don't drink.

congrats mayne u a inspiration