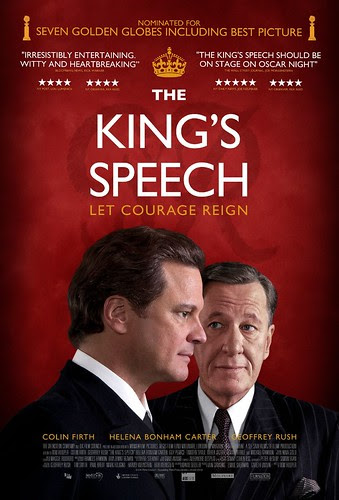 This is what I kept thinking of while recently watching The King's Speech: "This reminds me of Masterpiece Theater." And not in a bad way, mind you, because I've always liked the good things on Masterpiece Theater. But it's the air of the story: very little by way of visual invention; instead, it's very solidly produced drama, with a good script, acted out by a great cast. Aside from a few stylistic things along the way, there's no real feel of a particular "director's hand" in The King's Speech.

The story follows a particular Prince of Wales who is destined – although, being second in line, he doesn't know it – to be King George V of England. This particular Prince has a deep problem that seemingly makes any public life nearly impossible: he has a terrible stutter. The King's Speech would probably be the best movie I've ever seen about a stutterer, if not for A Fish Called Wanda. As it is, this movie runs a nice second.

Colin Firth plays the future king, Prince Albert, the Duke of York, who in the first part of the film is frustrated by his stutter when he needs to speak in public but is also thankful that as second in line, he isn't called that often to perform acts of oratory. He seeks out some treatments, but none of them work; it is his wife (Elizabeth, the Duchess of York, played by Helena Bonham Carter) who visits yet another 'expert' on the treatment of stuttering, one Lionel Logue (Geoffrey Rush). Over the course of the film Logue provides Albert with treatments, most of which Logue has developed on an ad hoc basis over his life. And over the course of the film the two men develop a deep friendship, despite Albert's insistence that they cannot (because of his station) and Lionel's insistence that when the door closes in his office, and it's just the Prince and Lionel, then it's Lionel's rules that must be obeyed.

Of course, we know – without even needing to consult the history books – that Prince Albert will, in fact, become King; we also know that he will be called to address his entire nation via the relatively new medium of radio, and that this speech will be either his big triumph or the hill on which he dies. How it goes really isn't a surprise at all, and it shouldn't be; for all the historical drama, Masterpiece Theater production full of Brits thing that this movie has going on, it's pretty clear early on that The King's Speech is simply a new version of one of storytelling's most classic tropes, the student who must learn from an enigmatic and idiosyncratic teacher if he/she is to triumph over his/her foes. The only difference is that here, the foe that must be triumphed over is a part of Prince Albert's own character. It's an inner struggle, and it's only in that that The King's Speech differs much in structure at all from, say, The Karate Kid.

A problem is established for which a person needs help. The person has a tentative, untrusting meeting with a teacher who promises to help. The lessons begin, and they're a bit confusing at first, both to the student and to us, watching it. But over time, as the connections begin to form, the lessons make more sense, and the story builds to the inevitable conflict, whether it be against a particular boxer, the rich blond black-belt karate dude, or against the expectations that the King will fail to deliver a stirring speech to his nation in a time of war.

Ultimately, what makes The King's Speech compelling is pretty much what makes all movies compelling that tell familiar stories: the characters and the relationships amongst them. Albert and Lionel form a friendship based in deep respect for one another and, even, need, without ever really coming out and saying it. Albert, obviously, needs help with his stutter, but Lionel needs some kind of acceptance. Lionel, it seems, is an amateur actor who wishes to play the lead in something, anything, but who seems eternally relegated to secondary roles. In helping the future King, he finally – in some way – achieves his wish. I also like how the film makes a gentle feint in the direction of having the King turn away from his teacher, but this well-worn and frankly unsurprising turn is avoided by the two men having a frank conversation.

Tom Hooper's direction is fairly understated; he seems content for the most part to let his actors do most of the heavy lifting after he decides where to put the camera or how to light the room. In fairness, there are a lot of interesting choices to be made there, and Hooper makes them. He rarely puts his actors in the center of the frame, for instance; they are always slightly off to the left, or close to the bottom. The lighting is generally bright and washed out; this is not your standard English drama with long walks in gorgeous gardens while everyone talks about God Save the King. After watching a bit of the film, I started to wonder why Hooper just didn't go all-in and shoot The King's Speech in black-and-white.

(Apparently Tom Hooper is now helming the filmed adaptation, long-awaited, of the Les Miserables musical. Well, he's got his work cut out for him. I've made that movie in my head to the point where I can read the credits over the final montage.)

I absolutely loved The King's Speech and I feel that the Oscar is well deserved. I saw it on the big screen and when Albert finishes his first big speech, the audience applauded.

Btw, give the soundtrack a listen. They used the actual microphones built for the Royal family at that time to record it, which gives it a unique quality.

Nah. I liked the Social Network, but it was, I dunno, "cinema-y". The King's Speech made me cry; definitely the better choice.

I'm glad The King's Speech won, I had seen it, thought it was a great movie, very worthy of the win. I hadn't seen The Social Network and I don't think that I will, the previews never caught my interest.