I saw this on Tumblr, and I had to put it here. Apparently a town opened a new library, and as part of the festivities, asked a bunch of writers at the time to write letters about libraries to the town's children. This is the one that Isaac Asimov wrote. I've rarely seen a better summation of what libraries are for. 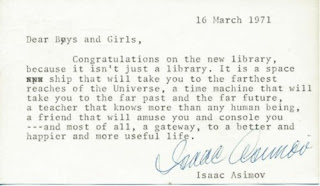 UPDATE: Wow, this post is apparently generating a highly unusual amount of traffic to my little old outpost on the Interweb! Hello to all new visitors, I hope some of you stick around...but I'm not sure of the source of the traffic, which seems to be coming from mail servers, which leads me to believe it's a post on a Listserv or some other kind of mailing list. If someone wouldn't mind dropping a bit of background as to where you're all coming from in the comments, I'd appreciate it!

That really is pretty cool.

Love this, and now I want to find this on a poster..in this same format (catalog card & all...)

I received this through the alsc-l.ala.org list-serve: Ass. for Library Service to Children. I'm a children's librarian in South Florida. Thanks for posting this!

Yep, it's librarians invading your blog!

yep, it's librarians invading your blog.

It was sent out through the AASLForum listserv. Nice!

I came from Fusenews- a blog from NYPL's Elizabeth Bird. I'm a teacher and love books and libraries. Thanks for sharing this awesomeness with the world :)

I am from the Public Library listserv. Quite Awesome stuff from Asimov. Libraries are and always will be the beacons of light to our communities.

Also posted on PUBYAC, another listserv for children's and YA librarians