Pie on the brain lately!

::  Beth Howard, who has become one of my favorite bloggers, has been working on a book called Making Piece, which is about how she dealt with awful grief (her husband passed away suddenly at a terribly young age) by, among other things, throwing herself into pie-baking and from there to pie evangelism. Her book is now available for pre-order. I'll definitely be getting a copy. I've found that learning new things, and becoming a bit obsessive about them, is a good way to (at least partially) deal with grief.

::  On the making of pie...I do love a good pot pie, although I hadn't made one in quite a long time until last week, when I did what pot pies are for and made one as a way to use up some leftover meats. In this case I used leftover ham from New Year's and leftover smoked beef sausage. The result was like this:

I thickened some beef broth with a roux and added some onion and sauteed mushrooms, in addition to the meats. The crust? Well...I really need to start making my own. This was a store-bought crust, one of those ones you unroll. The resulting pie was tasty, but a bit on the salty side. I'll be revisiting the pot pie concept again soon, though -- next week I intend to make some pulled pork, which I think would make an interesting pot pie!

Part of my problem with making pie crust is that we only really have one spot in the kitchen area suitable to the rolling out of a dough, and that's our dining room table, which isn't always free of obstruction. (Translation: we tend to pile an awful lot of clutter on our table.) Not that clearing the table takes very long, but it's just a whole extra step, you know?

:: Speaking of baking pie, I wonder if this gizmo, which Roger Green e-mailed to me, actually works? It seems...well, it seems odd. Why not just bake two pies? How strange!

::  My favorite pie for eating has always been apple, which cries out for a scoop of vanilla bean ice cream and some caramel sauce drizzled on top:

I just can't get behind that whole "cheddar cheese on apple pie" thing, though. Cheddar cheese and sliced raw apples are great together, but...I can't make the leap from there to cheese-on-apple-pie. Sorry!

:: Roger also e-mailed me a while back a couple of posts by Mark Evanier, on the subject of pies as comedic props (i.e., pies for forceful application to people's faces). It makes for interesting reading, as Evanier spells out some techniques (here and here) for what he considers 'proper' pie-throwing. Basically he says that pies for throwing should consist of a crust outside of the tin or pan, filled with shaving cream. I suppose he may have a point, if your pie-throwing is part of some kind of performed skit of stage show or something like that. Quick clean-up and the lack of any souring-milk aromas are certainly desirable factors. But as for myself, well...I'm not a stage actor, and I sure don't want to get hit with something that tastes like soap because it basically is soap! Nope, if it's going in my face, I want the real thing.

::  Finally, some funny behind-the-scenes photos. Here's Natalie Wood on the set of The Great Race, whilst shooting that film's pie fight: 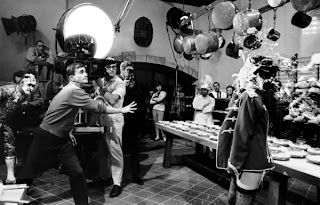 (EDIT: I couldn't remember where I got that photo from...but now I do. And contrary to Mr. Evanier, it turns out that all those pies in that pie fight were real! No shaving cream at all!

And here is actress Mia Sara, on the set of Ferris Bueller's Day Off. For some reason she's getting pied. No idea why. 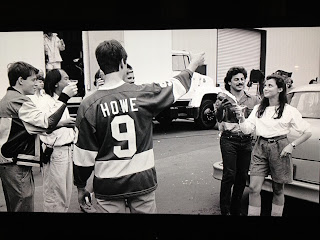 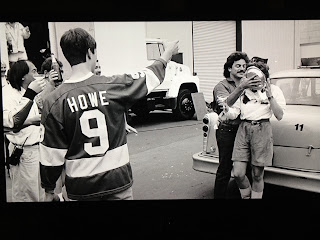 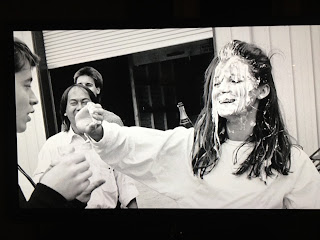 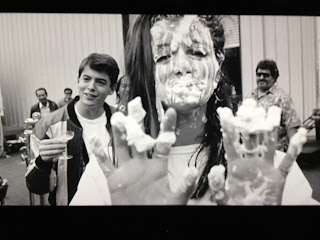 That about covers it. Pie is awesome!

A pie in the face is a wonderful thing!

Email ThisBlogThis!Share to TwitterShare to FacebookShare to Pinterest
Labels: Books, Food, Movies, Pie in the Face

I also recommend to you the January 16 Beetle Bailey strip, which you can find HERE; free site, but registration is required.

I have been jonesing for a fruit pie for about a month now.

Cheddar cheese on apple pie? Never heard of, or tried, that combo. I'm with you - pie ala mode is the way to go.
xoRobyn

I gave away a bunch of pies as part of my homemade Christmas this year.

- If you have a microplane, microplane about 4-6 almonds or walnuts and add them to the pie dough. Makes it more flaky. (If you don't own a microplane, get one - they're amazing)

- In pecan pie, add about a teaspoon of cocoa powder to the filling. Yum. A tiny bit won't taste like chocolate but will add a mysterious hint of something nice.