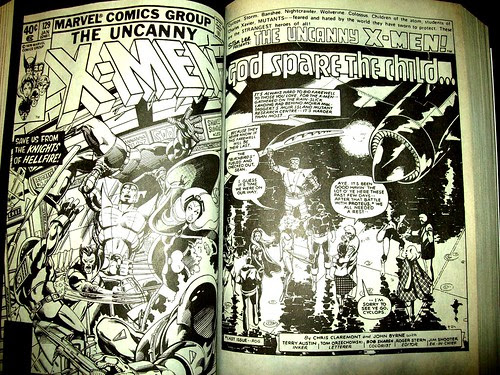 My main era of comics reading was in the mid to late 1980s, spanning roughly the latter half of seventh grade until the end of my senior year, when I decided to pretty much stop reading comics on the basis that there was no way I was going to be able to afford all my monthly titles whilst in school.

For the most part I was a Marvel fan. There were titles that I didn't much care for, but I really grooved on The Uncanny X-Men from the first time I read it (issue #183 or thereabouts, my first issue being one in which Peter Rasputin has to tell Kitty Pryde about a girl he'd met on an alien planet). My entrance into the Marvel Universe was pretty much of the "jump in, buy comics, read 'em and put it all together in my head" variety, but back then, you could do that. Sure, the Marvel Universe had tons of continuity going on, but it was still fairly manageable without resorting to lots of reference stuff.

So, a couple of years after I started reading comics a lot, Marvel produced a trade paperback of something called "The Dark Phoenix Saga" from The Uncanny X-Men's issues 129 to 137. I knew enough about this storyline to know that it was already considered something of a classic of the genre, and I knew that Jean Grey's death was an event that was still showing repercussions throughout the Marvel Universe. Now I was going to find out how that death had come to pass.

That original trade paperback of mine is long gone, but I have since reacquired the "Dark Phoenix Saga" as part of one of Marvel's "Essential" compilations, which nicely and cheaply reprints lots of issues into a nice thick volume (albeit keeping the cost down by printing in black-and-white). I plowed through this entire volume a while back, and a lot of it comprised stories I didn't know, particularly the ten or fifteen issues leading up to the start of the "Dark Phoenix Saga", and a couple of issues that showed the aftermath.

The faults in Chris Claremont's stories tend to stand out quite a bit more in omnibus editions. Now, to be fair, I'm not sure if some of the most annoying style tics of his were actually tics of his or if he was directed by editors to do some of these things, but we're talking about Wolverine constantly pointing out his unbreakable claws, Cyclops constantly referring to his ruby-quartz visor, and so on and so forth. Or how it sometimes seems as though two or three pages of every twenty-two page issue is given to summing up stuff that happened before. And over time, Claremont's focuses on character interactions and complex webs of interrelationships tends to start to feel like soap opera; I remember one commentator describing his run on Uncanny X-Men as "Dallas with capes".

And yeah, that's all true. But it worked a lot better when you were reading these issues one at a time, once a month. And now, reading the omnibuses, those flaws aren't really all that distracting, when Claremont is firing on all cylinders...as he is in the "Dark Phoenix Saga".

This story starts out small. The X-Men are recovering a bit from a pretty tough battle, and there are apparently some conflicts of personality within the team (this is how things seem if you start here and not before). Professor X returns from somewhere (I don't recall where he was), and almost immediately, they detect two new mutants, one in Chicago and one in New York City. (The X-Men are always scanning for new mutants, so they might intercede and help them learn to deal with their mutancy in a world that is hostile to mutants.)

From such humble beginnings -- tired team, investigating two new mutants -- this story takes us on an ever-widening story whose scope gets bigger and bigger and bigger until, by the time we get to the final three issues or so of the "Dark Phoenix Saga", we've got full-blown space opera going on, leading to a showdown amongst ruins on the dark side of the Moon. And along the way there is a love story, seeds planted for future tales (this is where we meet Kitty Pryde, after all), and the slow but inexorable rise of Jean Grey's power until she can no longer control it.

Claremont -- along with artist Byrne -- presents one of the most cinematic stories I've ever read in a comic. In a real way, most of the comics stories of today -- and the comics movies -- can trace some piece of lineage, in terms of storytelling style, back to the "Dark Phoenix Saga". This is one of the stories that I would likely cite if someone ever asked me what stories they should read if they want to see superhero comics at their very best.

And now I want to read the bloody thing again!

Email ThisBlogThis!Share to TwitterShare to FacebookShare to Pinterest
Labels: Books, Comics, Page One

Claremont's stories (which I read at the time) WERE epic, and reading month by month, the tics weren't as obvious.