You never know WHAT is gonna come through that door. 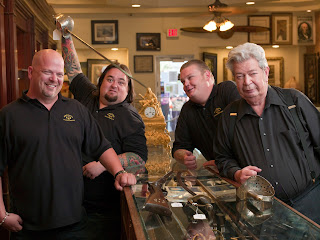 A few months ago we subscribed to Netflix, so we could watch streaming shows and movies now that we had high-speed interweb. Netflix has been something of a mixed bag – more on that another time – but we found some shows to watch on Netflix that we've missed owing to our not being a cable teevee household. One such show is the History Network's Pawn Stars.

This show, for those unfamiliar with it, takes place in Las Vegas, at a pawn shop owned by a guy named Rick Harrison. Working with him is his father (called "the Old Man") and his son (called "Big Hoss") and a guy who is mostly played for comic relief (called "Chum Lee"). And what happens on the show is pretty straightforward: people come in with stuff that they try to sell, leading to some work identifying the items, and then the price haggling (if Harrison and company are interested in buying it). Basically it's Antiques Roadshow with some more personality to it, where money actually changes hands. Instead of someone being told that the gewgaw they've just brought in is really valuable and then they say, "Wow, I'm gonna keep it forever!", here we have people saying, "Great! That guy said I could get $10,000 for it, so I want $10,000 for it."

Pawn Stars is a lot of fun on several grounds – the guys on it are an entertaining bunch, the haggling is entertaining, and the items themselves are often fascinating. There are also "before-after" things, too, when Harrison and company buy something that's a wreck and then get it restored. These segments are so fascinating, actually, that their preferred guy for restoration now has his own show. (We haven't seen this yet, but it's called American Restoration. When this shows up on Netflix, we're there.) Where the focus in Antiques Roadshow is on the stuff, here the focus is more on the people and the connection they have with their stuff. Sometimes there are sad little vignettes, when people who are clearly down on their luck are trying to make a buck by hawking their stuff, and they get less than they clearly want; sometimes there are triumphs when someone discovers that an item they got someplace for very little is worth a whole lot. And then there are the people who don't know that what they've got are fakes. (One guy, in an early episode, has promised his wife that he'll make a lot of money selling his antique gun...which turns out to be fake and worth about fifty bucks. Ouch. Lots of curse-word beeping on that guy's reaction!)

Firearms of all sorts seem to be the most common types of items brought in on the show, but this is all very interesting – you learn a lot about the history of firearms by watching this show, and they seemingly never buy an old gun without taking it out to the wilderness and firing it. Exploding stuff is cool! For me, the most amazing item was a guy who came in with a big hunk of gold coins all melded together – it was part of the treasure from a shipwreck off the coast of Sri Lanka, discovered by Arthur C. Clarke and a diving buddy of his years ago, that turned out to be one of the richest treasure ships ever found. Harrison did not end up buying the treasure lump, but this whole transaction was amazing. (Clarke wrote a wonderful book on the finding of the ship, The Treasure of the Great Reef.)

This particular transaction raised the standard question: is Pawn Stars for real, or is it staged? I suspect that it's a mix of both; there's no way it could be one hundred percent 'real' and look as professional a production as it does. There are times when the influence of producers shows a little too much (such as when the second season starts and suddenly every episode had to have at least one conspicuous reference to Subway restaurants). But really, I don't care – the personalities are engaging (Harrison and company come off like a terribly fun bunch to hang out with), the show is fun, and the stuff is real. Well, usually, anyway. 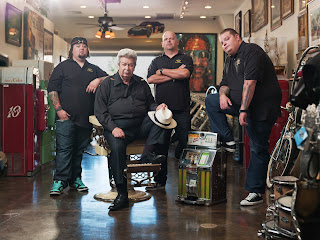 Rick Harrison has a new book out about the whole pawn shop experience, called License to Pawn. The book is a fast, breezy, and extremely entertaining read. It's worth noting that Harrison and his family have been in the pawn shop business for years, and that what's seen on the show is just a small part of what really goes on in a pawn shop. The Harrison family has seen its share of seedy characters throughout the years, and there are a lot of wonderful anecdotes in the book that detail the colorful people who have come through on occasion. The show never depicts the dark underbelly of Las Vegas, but it's clear that Harrison and company have seen a lot in their years. There are even some haunting tales, including one poor fellow, socially awkward, whose main hangout in life was the pawn shop until he finally had to be forbidden to return after he sexually harassed a female employee and died soon after. And there's probably a fascinating show in itself to be made from the life of the person who has to staff the shop's overnight window (bulletproof glass, of course).

The book has chapters by the Old Man, Big Hoss, and even one by Chumlee, which strongly implies that Chumlee's not quite the big dumb lug the show makes him out to be. Each one is refreshingly up front about their own strengths and weaknesses; Harrison himself is proud of how smart he is, but he's also willing to admit that he was an awful student in school and that he can't resist some particularly crackpot schemes to make a quick profit. (One such scheme involves nickels. Lots of nickels. Believe it or not, Rick Harrison thought he'd make money by investing in nickels.) There's something about Harrison that is inherently likable; he comes off as the kind of guy whom you could consider a great friend even if you disagree with everything that comes out of his mouth. (Could be the fact that at one point in the book, he admits to being completely uninterested in fashion and declares a preference for...overalls!) Big Hoss and Chumlee have had drug-related struggles in their past, which they write frankly about, and my personal favorite anecdote in the book comes from Big Hoss's chapter. Here it is:

I'm sitting on the stool inside the shop at the night window and a woman walks up and asks me, "Do you buy gold teeth?"

She's looking at me through the window, and she doesn't look like a drug addict or a desperate person. She's in her fifties. She's dressed reasonably well, her hair is groomed, she's not dirty. (Those three descriptions qualify as high class for the night window.)

She says, "OK, good. Do you have a pair of pliers I can borrow?"

Stupid me, I think the two questions are unrelated. I think she's asking to borrow pliers for reasons that have nothing to do with the question of the gold teeth. I'm thinking maybe she needs to fix her car, or maybe give them to a guy she's with so he can fix the car.

It was late. I probably wasn't thinking straight.

I grabbed a pair of pliers from under the counter and told her I'd need a driver's license to hold so I make sure I get my pliers back. She nods and hands her license through the slot. No big deal to either of us.

Anyway, she finally shows up at the window with her mouth full of toilet paper. She drops a gold tooth and the pliers through the slot.

A gold tooth covered in blood.

So now I'm wishing I hadn't given her the pliers. If I had been thinking, I would have realized why she wanted the pliers. The idea wasn't to refuse the pliers out of any moral judgment – she's got to do what she's got the do. I just shouldn't have supplied her with the means to do that.

I'm looking at the tooth, thinking, "Well, Big Hoss – now you've got to buy it." After all, she did go to the trouble to bring it to me.


Somehow this one vignette tells you so much about what happens at a pawn shop in the middle of the night in Vegas. You have it all – desperation, weariness, and a certain moral recognition that the desperate need to be afforded whatever dignity is in our power to spare.

Now I just wish Netflix would get some new Pawn Stars episodes available for streaming....

(images via)
scrawled here by Kelly Sedinger at 8:51 PM

I don't watch the show regularly, but it can be fascinating. Great personalities.
As for the nickel scheme, in one of Michael Lewis' books on the recent financial crisis (The Big Short? One of those), he talks about one financier who has 20 million nickels on pallets in a vault, waiting for the value of nickel to reach the right value. Maybe it's gotta be on that scale to work.

As a big fan of the Antiques Roadshow this one fit perfectly into my viewing list. I often save up serveral of these shows, like my fishing shows, because I like to watch several episodes at one time. I would have loved to have a summer intern job at that pawn shop. Just looking through the inventory in their vault would be amazing.

My fiancee loves that stuff, so I often watch with her. Try storage wars..it is cut of the same cloth and the characters in competing with each other move it along, also on netflix.

I am a huge fan of that show. I bought a house a found a ton of stuff in the basement and attic. I had a yard sale but I wasn't sure what to do with the rest of the stuff. I don't want to just throw it away, this stuff has some value. A friend of mine told me to take the stuff to one of the Gainesville pawn shops. I just may do that because I don't want this stuff in my house anymore.
P.S. I love the overalls!!