So, it turns out that a good possible way to get oneself a jump in blog traffic is to post something cool about libraries. That post was linked on a listserv for librarians, and then, this happened: 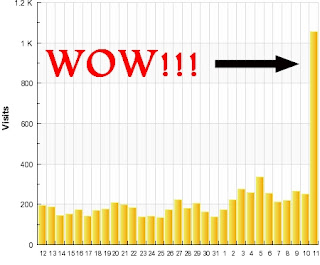 I gotta say, folks...this is really cool. It's been a very long time since I enjoyed any kind of spike like this. Linkage just doesn't seem to be the 'coin of the realm' that it once was for Blogistan, which results in numbers that pretty much settle into a certain plateau and then for the most part stay there for very long periods of time. But the old truism still holds, that the stuff I really hope will get some attention and traction someplace else doesn't, and it's a throwaway post -- of all the images I see on Tumblr all the time, why did I post that one and none of those? -- that catches someone's eye, inspires them to link it from a listserv with a lot of members, and then, for a day, the blog explodes (comparatively speaking -- there are many blogs out there for whom my traffic today would just be a Wednesday).

So anyway, thanks to the person who linked me in the first place, and I hope I gain at least a few new regular readers out of it!

i'm surprised. Usually a post has to have "bikinis", "sex" or "Nazis" in the title to make that kind of spike.

At least that's my experience.

Title of Kelly's next post: "Sexy Nazis in Bikinis."

No. I can promise that won't happen. I won't stoop to that level.

(And besides, the results when I googled 'Nazi Bikini' were, shall I say, less than inspiring!)