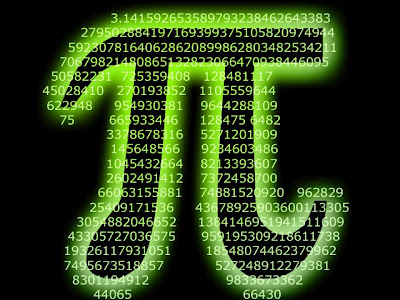 Yup, time to celebrate the Lord of All Irrational Numbers, the King of All Ratios and the Mostest Cool of All Formulae, "A equals pi R squared". It's Pi Day!

π (sometimes written pi) is a mathematical constant whose value is the ratio of any circle's circumference to its diameter in Euclidean space; this is the same value as the ratio of a circle's area to the square of its radius. It is approximately equal to 3.141593 in the usual decimal notation (see the table for its representation in some other bases). The constant is also known as Archimedes Constant, although this name is rather uncommon in modern, western, English-speaking contexts. Many formulae from mathematics, science, and engineering involve π, which is one of the most important mathematical and physical constants.[5]

π is an irrational number, which means that its value cannot be expressed exactly as a fraction m/n, where m and n are integers. Consequently, its decimal representation never ends or repeats. It is also a transcendental number, which implies, among other things, that no finite sequence of algebraic operations on integers (powers, roots, sums, etc.) can be equal to its value; proving this was a late achievement in mathematical history and a significant result of 19th century German mathematics. Throughout the history of mathematics, there has been much effort to determine π more accurately and to understand its nature; fascination with the number has even carried over into non-mathematical culture.

I never saw the cult film Pi, but I heard some good things about it.

Of course, we're talking about the mathematical concept of Pi, not other kinds of Pi, like Magnum PI:

And yummy as it may be, we're definitely not talking about pie:

All hail Pi!
scrawled here by Kelly Sedinger at 8:42 AM