The Colors of Earth, Water, and Heaven

I recently found a graphic novel on the shelves at the library called The Color of Earth. It turned out to be the first book in a trilogy (the other volumes being The Color of Water and The Color of Heaven), so I put in my request for the other two volumes and read the entire trilogy. And am I glad I did.

The Color Trilogy (as I'm calling it here) is written and drawn by Kim Dong Hwa, a Korean comics creator; the term for Korean comics, which I'd never encountered before, is "manhwa", and The Color Trilogy is apparently the first work by Kim to be translated and published in the United States.

The idea of romance comics is appealing to me, but the ones I've tried reading have, for the most part, been a mixed batch, so I was a bit apprehensive about this series. It turned out, fortunately, that The Color Trilogy is much more than a romance comic. It's a coming-of-age story, a picture of life in small village Korea many years ago, a meditation on the meaning of love, and a wonderful character study of two compelling women.

As The Color of Earth opens, we meet a widow who runs a tavern in a small farming village somewhere in Korea, with her daughter, Ehwa, who is on the cusp of puberty and just starting to wonder about things like boys. Over the course of three volumes, Kim chronicles the lives of these two women, the older and the younger, as both begin to find love again, the older with a wandering artist who comes through town every few months, and Ehwa with several young men in the area before she settles on the one whom she loves.

Along the way, Ehwa wonders about the changes her own body is undergoing, so a great deal of the trilogy consists of discussions between her and her mother about the nature of female maturity and the nature of a woman's heart and how women approach love as opposed to how men do. Occasionally there are long monologues, such as this, by the widow:

The heart of a woman is really strange.

There are days we long for a fireplace where we can warm our hearts through the night. If we don't have one, we grumble, but we take solace in the company of family and friends.

Yet through it all, we yearn for that fiery hearth that we can tend to all through the night.

The pacing in these books is slow and bucolic, reflecting the turning of seasons and the passing of time as Ehwa grows from pre-pubescent girl to young woman on the verge of marriage herself. I liked the slow pacing a lot; the books take their time not only to take the emotional drama of Ehwa and her mother seriously, but they also allow the village to take on a life of its own, through additional characters such as the raunchy-tongued men who frequent the tavern and Ehwa's best friend, who is a lot more open about sexual experimentation than Ehwa is, both to Ehwa's partial distaste and partial envy.

The books have a number of motifs wound throughout its narrative, foremost among them being discussions of native Korean flowers and how their own reproductive life cycles illustrate truths about men and women. I also appreciated how the book's translator doesn't substitute English metaphors for Korean ones, but simply uses the Korean ones and then provides an asterisked footnote explaining what each metaphor means. (Much of this, admittedly, has to do with Korean slang for sexual organs or situations.)

The art of the books is simply wonderful; beautiful compositions abound, and it sometimes feels as though every other page consists of a panorama of the Korean rural countryside. Some pages are dense with so much detail that the work almost resembles a woodcut; others are clean and sparse in the best way of traditional Asian art. Characters are drawn in a less-stylized way than in manga, so readers acquainted with Asian comics primarily through manga (or anime) may be surprised by the expressiveness given the characters' faces. The Color Trilogy is a beautiful work. Here are a couple of art samples: 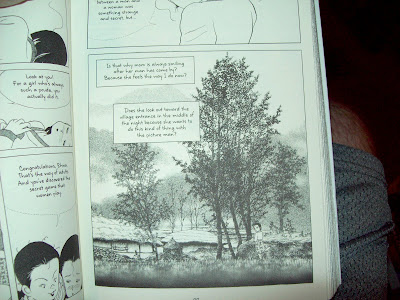 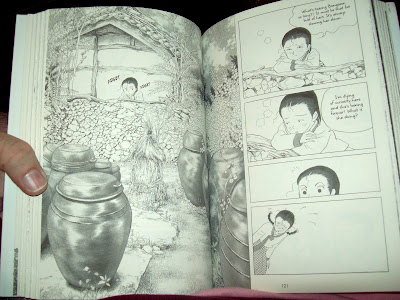 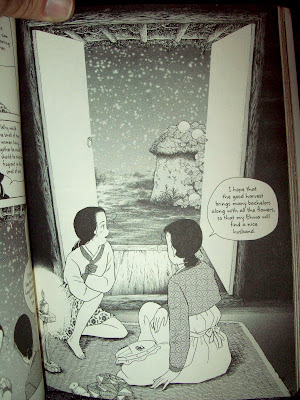 This series is highly recommended.
scrawled here by Kelly Sedinger at 1:15 AM

Looks interesting, and the art is just lovely. It's nice to see a non-superhero comic (not that there's anything wrong with superheroes, but obviously the medium can be used for so many more kinds of stories).

Are you familiar with Blade of the Immortal? It's a manga by a Japanese artist/author... very different subject matter from this, more action/fantasy, but one of the pleasures of that series is a recreation of historical Japan (18th century, I think -- it's been a while since I read them), and the rhythms of that world. It also is black and white art work with the occasional panel that resembles a woodcut, so this reminded me of Blade. Also, one of the main characters is a girl coming of age.

That one is very violent, though - not sure how you feel about that, so be cautious if you decide to check it out...