And now another formerly regular feature here at Byzantium's Shores makes its triumphant return! I don't think I ever bothered to officially reveal the location of UI 47, almost four months ago, but as I recall, it was guessed correctly very quickly as the bleachers in straightaway center field at Wrigley Field, in Chicago. Seeing as how the seats are completely empty, I can only assume that shot was taken in October, since the Cubs so rarely need to open up the stadium in October! [rimshot]

Anyway, it's been a few months, so I'm going to simply reset all Quatloo values to zero. For all of you who failed to claim your Quatloos after guessing correctly, well, them's the breaks. Hey, it's not my fault that only the Bank of Aldebaran IV exchanges Quatloos for American dollars. If you can't get to Aldebaran, that's your problem. But enough of that, time for the new puzzler: 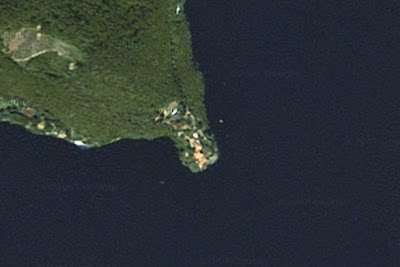 Where are we? Rot-13 your guesses!
scrawled here by Kelly Sedinger at 11:52 AM

Not even a hint?

Have you forgotten how this works? :) No hints until the puzzler has gone unidentified for one week. Ha!

I LOVE Google Earth to distraction and spend way too much time zooming around the planet with it; I'll figure this one out!