:: What management idiot thought this up?! And to not even spell "tries" right?!

:: Not a web find, but something I saw on the way home from grocery shopping last weekend and I got a picture with the phone: 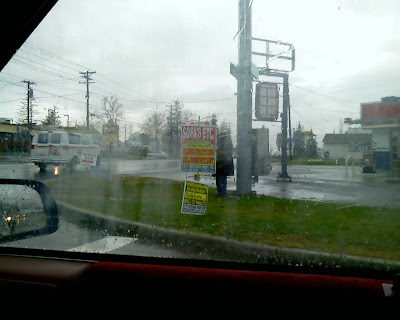 It's kind of hard to make out because it was raining, but it's one of those street corners that is covered with signs because a business down the road is having some kind of massive blow-out sale of the type associated with going-out-of-business. However, in this case -- it's a furniture store -- the signs don't say "Closing" or "Going out of business", but rather, "Remerchandising Relinquishment". And I have to note: I have absolutely no idea what this means. None. Is that a new way of saying "Going out of business", or does it mean something else? What the heck is "Remerchandising Relinquishment"?

And while I'm on the subject, does anyone besides me ever wonder about the people whose job it apparently is to stand at street corners holding placards for stores having their liquidation sales? Are these actually employees of those businesses, or is there some firm that actually contracts out their employees to hold these placards up at street corners, or are they poor people being paid under the table, as it were, to do what must be a freakishly boring job that requires standing in one place, doing nothing, in potentially ugly weather (like a cold November rain)?

:: I've been long trying to decide what contemporary gizmo it is that forms the justification for our species's existence in the first place -- i.e., what we were created to invent. I've now decided that it is USB. I want each and every item in this wonderful post.

:: Hey, wanna know what life was like for political prisoners in the Soviet Union? Latvia's got you covered! (via)

Enough for this week. More next!
scrawled here by Kelly Sedinger at 7:10 AM

I think they are day laborers.... it must be a miserable job in all sorts of weather.

Love and hugs to you my friend, and an award at my place:

Not only that, but they put in the dreaded apostrophe when they meant the plural of "sofa".

I believe that would mean relinquishing old stock (by selling it) in order to make room for new stock. You're not supposed to know what it means, but you're supposed to think it means something like going out of business.