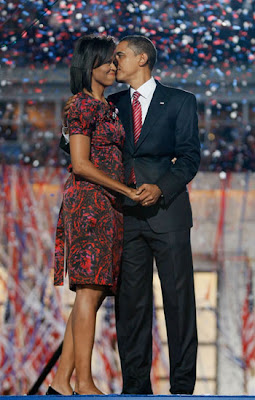 I've been holding this post in the back of my head for about two and a half months now, ever since Barack Obama delivered his acceptance speech at the Democratic National Convention. I haven't written it until now, fearing in some way that I might jinx things. But it finally seemed safe over the last day or two to start, and now, I've clicked Publish as the networks have made it official, projecting Senator Obama's electoral vote total to top the magic number of 270. Barack Obama is going to be President of the United States.

My readers (those remaining, anyway, and more on that a bit later) will know that I had no intention of voting anything other than Democratic, as is my usual wont. I would have voted for any Democratic nominee, no matter who it was; not only am I a Democrat myself, but the last eight years have managed to sour me even more strongly on Republican policies and the Republican approach to policy in general than even I thought possible. I'd have been proud to vote for Hillary Clinton, had she won the nod. Ditto Al Gore, had he run. Heck, if we'd nominated John Kerry again? I'd have voted for him. I'd have voted for Michael Dukakis over John McCain.

But Obama did something that hasn't happened for this habitual Democrat in a long, long time: he inspired me. Obama made me feel as though something might be in the offing, something more than the typical jockeying for political advantage in Washington. Obama made me feel as though someone was running for President with an eye to doing big things again, a President who was running as a progressive, an actual (if not wild-eyed) liberal as opposed to running as a not-Republican. Most of all, Barack Obama made me feel as though we'd finally managed to break free of a seemingly endless cycle of elections in which we always seem to be saying, "A country of more than 250 million people and these are the candidates we got?" That's what Barack Obama made me feel like. In past elections I may have disagreed with the usual canard of describing the act of voting as "choosing the lesser of two evils", but this time I felt actively hostile toward that notion. I can't imagine seeing this election as choosing the guy less likely to screw things up. Nobody's ever made me feel like that, not even Bill Clinton in 1992.

Will he live up to all this? Who knows? Probably not; he's a human being and human beings screw up and are always disappointing at some point along the line. (I can understand his reasons for not doing so, but it would have been nice if Obama had taken a strong public stand against California's odious Proposition 8.) But I like his chances. Curiosity, in my book, always beats out disengagement. Respect for knowledge and expertise always beats out callous disregard for same. Thoughtfulness always beats out rock-solid convicion in one's own instincts and sensations about people. Also, Obama has been surrounding himself with people who know how Washington works and who will have the relationships and understanding to get things done, and Obama has been running as a change agent, which is different from running as an outsider. Frankly, I've never liked the whole "outsider" thing. Sure, a fresh set of eyes and perspectives is good, but too often this is couched in the assumption that everything in Washington is bad, bad, bad, and that what's needed is someone to show up who has no idea at all of what goes on there. (Of course, this is no guarantee of anything either; while Jimmy Carter was notable in his failure to understand how to work the mechanisms of Washington to get things done, George W. Bush surrounded himself with people who did understand those mechanisms, to results that may be even more dolorous than the ones Carter produced.)

Of course, there's the racial component of Obama's election. We're still a country that has a long way to go in supplanting our racist past, but this is a major, major step. Twenty years ago, I was in high school, and in my last two years (which overlapped the 1988 Presidential election), my history teachers would occasionally eschew the topic of the day for at least part of a class period in order to discuss a contemporary issue or two. Lots of times it was the election that year – the primaries during the second half of my junior year, and the general election campaign during the first part of my senior year. One topic that came up a few times was apartheid in South Africa. I remember all of us sitting in our classroom feeling a bit smug and superior that at least our country wasn't like that anymore, that our country was no longer a place where the races were kept rigidly separated. It didn't occur to me then that perhaps this smugness was a bit misplaced in a small town in rural Upstate NY that I don't think ever had more than seven or eight black people at any one point in time living within its boundaries, and in any event, racial attitudes had other ways of manifesting themselves back then. But I do know this: if you had told me, in the midst of one of those classroom discussions of apartheid and the requisite "Aren't we superior to those folks!" self-congratulation, that South Africa would elect a black President more than ten years before we in America would even nominate a black for our own Presidency, I would have said you were crazy.

But here we are. In two and a half months, we will have a President who is actually concerned with policy; who doesn't think he can look into the eyes of other heads of state and divine the natures of their souls; who won't think that he is the instrument of God's will on Earth and that therefore everything he does is Godly; we will have a President. I can't wait. My longtime readers will know of my ability (or habit, or demented tendency, as the case may be) to relate things in real life to some pop culture artifact near and dear to me, and this is no exception: all those years I spent watching The West Wing and wishing for a real-life President like Jed Bartlet now feel like they may be paid off. As Leo McGarry told candidate Bartlet in "In the Shadow of Two Gunmen", "This is the time of Jed Bartlet, old friend. You're gonna open your mouth and lift houses off the ground." Well, this is the time of Barack Obama, and he already has opened his mouth and lifted houses off the ground. Not a bad way to start.

On a meta-note: this post isn't a one-off. I plan to resume blogging regularly now. The last three months have been highly refreshing to me. I haven't spent them doing anything massively abnormal, just living, and largely without regret. I've read some books and some comics and some short fiction; I've watched movies and teevee shows; I've gone for walks and done some cooking. I've reconnected with my friends, my loves, and my life. Is that enough for now? No, probably not; it never is, and who knows how long it all can last. But to those who have kept contact with me through the three months I've not been posting, I thank you all.

I'm not sure what my general approach here is going to be, but I'm hoping to do less reacting to stuff out there and doing a more introspective kind of blogging. This means that posts will generally be longer, and they may occasionally get more personal. The especially eagle-eyed will note that I've changed the layout of the place around a bit, and the tone of my postings will almost certainly differ from the kind of thing that went before. Not totally, of course, I'm still me, and I'm still mainly the one I write for in this space.

I will warn certain of my readers who differ from me politically that, while I've no intention of becoming a political blogger, I will be doing a bit of partisan ranting over the next day or two. Just hang in there through those and then we'll be fine, I hope. So welcome back, my friends, to the show that never ends.

In the words of President Bartlet, "My point is this: Break's over."
scrawled here by Kelly Sedinger at 11:08 PM

Yeah! So glad to see you back, and with a wonderfully written post at that!

Welcome back, Jaquandor! I hoped the end of the election would bring you back into the blogging world. I like the new layout, and look forward to seeing what's on your mind.

Incidentally, I'm with you... I wouldn't vote for a Republican if they were guaranteeing me daily sexual favors from the celebrity babe of my choice for the rest of my life, but this time it wasn't merely party loyalties. I wanted to see history made tonight, and I wanted to give the reins to an honest-to-god grown-up. It's time to start shoveling up all the crap that's been spilled over the last eight years.

Welcome back! We've missed you.

Good to have you back, and with such a great post, at that.

Good to have you back. It's hard to believe it was three months.

Welcome back!!! I like the new picture at the top.

As I've said on my blog and in comments on other blogs, I was so prepared for disappointment I hardly know how to react to not being disappointed.

I had a hunch today would be the day.

It was good to see what you wrote, I agree, I cried a little. I will be wearing my "Real Americans for Obama" button into the indefinite future. North Carolina gone Democratic? When I moved here it was the land of Jesse Helms. Can't help feeling a tiny. bit. of. optimism.

Hmm.I've never removed you from my sidebar, but unlike the other Blogger posts, yours still doesn't update for me. then I stopped looking until I read in SamuariFrog that you were back. I'm glad for that. But I DO blame you for the Bills' recent slide!