A bag of rocks? 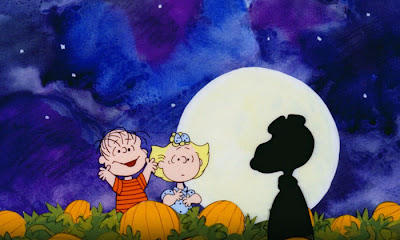 So we watched It's the Great Pumpkin, Charlie Brown last week, as is our annual holiday tradition; I think I've watched that show every time it's aired since college, and a lot of times before that, as a kid. But some things in it kind of bothered me this time – stuff I've noticed before but always made peace with.

Mainly, Charlie Brown is really treated like crap by his schoolmates, isn't he? I mean, this kid gets the shit end of the stick in just about every scene in which he appears, so much so that it's amazing he has any friends at all. After the brilliance that is A Charlie Brown Christmas, here poor Charlie is merely the butt of the joke every time he's on the screen. In the Christmas show, Charlie Brown is ridiculed for his selection of a tree and he's referred to as a blockhead, but he also manages to have a number of civil conversations with his classmates and they ultimately treat him well, in keeping with the spirit of the season.

In Great Pumpkin, though, most of the humor derives from a kind of meanness, doesn't it? Even the first big laugh, Linus's horror when Lucy stabs the pumpkin with the carving knife, is funny because Linus is so traumatized. But back to Charlie Brown: there's the kicking-the-football bit; there's the "Your name got put on the wrong list" bit when he gets a party invitation he wasn't supposed to get; there's the humiliating way the kids sketch their jack o'lantern pattern on the back of his head.

Now, all of that's still funny, and I still laughed at a bit of it. (Well, not the invitation list joke; that's always struck me as unfunny in a mean way.) But the trick-or-treating results this time really gave me pause. The joke is, of course, that at every house, while all the other kids get candy, each time Charlie Brown gets a rock. It occurred to me, watching the show this year, that where every other mean joke at Charlie Brown's expense is perpetrated by kids, the giving-of-rocks is done by the adults of the neighborhood.

Reading through vintage Peanuts strips as I've done off-and-on over the last few years, I've been struck by the fairly bleak undertone to the humor. Charles Schulz knew that kids were often mean, and it wasn't that they were mean because they didn't know how to be nice, but it's often because they just like being mean. But in the trick-or-treat scene, we get meanness not just from kids but from the grownups too; Charlie Brown's basically being told, "The whole world has decided that you're worthless, kid. Go play with your bag of rocks." Of course, there's a moral message of some sort in the fact that Charlie Brown is a fundamentally good kid; else he would have started putting those rocks through the living room windows of all the jerks who gave them to the kid in the crappy ghost costume in the first place.

And that's not even bringing up poor Linus's fruitless, doomed conviction that there's a Great Pumpkin who will reward his pumpkin patch for its sincerity. If Great Pumpkin has a moral lesson, as A Charlie Brown Christmas does, that moral is much grimmer and darker.

My favorite parts of the show are always the surreal "World War I flying ace" sequences. Is that the moral of this show, somehow? That a life of imagination is somehow more satisfying than that of everyday life in a neighborhood where the Halloween tradition is for all the homes to give out rocks to the kid with the worst costume?
scrawled here by Kelly Sedinger at 8:51 PM

My take on the Charlie Brown cartoons is that we're supposed to identify with Charlie Brown because as kids we sometimes felt that the whole world was against us. Other than that I'm not sure there is a moral.

I never like any of the Charlie Brown cartoons when I was a kid but we always watched them because we only had one channel and that's what was on it. But as an adult I have a sort of sentimental attachment to it and I was actually disappointed that my kids didn't like it either because I wanted to share this tradition with them.

And then there's the scene in "A Boy Named Charlie Brown" when the girls dance around Chuck and call him "Failure Face." Ouch!

I always identified with Charlie Brown as a kid, but the World War I Flying Ace part is the best part. I'm not sure what the moral is. Really Linus is the main character; maybe it's that Linus never loses his faith.