This week has been a blend of busy and not-feeling-like-posting. So I haven't been posting. Will that continue? Who knows?

:: Watched Raines last night, and I had one of those cases where I read a lot of middling-to-negative reviews of a thing, watch it, and wonder if they watched the same thing I did. I found Raines very enjoyable; Jeff Goldblum delivered a fairly understated performance (as compared to, say, Jurassic Park, in which he hammed it up) as Detective Raines, who has conversations with the murder victims whose murders he is investigating.

The commercials made this all sound rather Sixth Sense-ish, but it's not -- the show makes clear that Raines isn't really talking to the dead, but hallucinating them, which makes the conversations with them interesting in that the dead can't give him hints, seeing as how as they have no more information than he has at any given point in the investigation.

Anyway, I found the pilot nicely written, with a story that moved right along, and some good and snappy dialogue. Sure, the murder mystery is fairly pedestrian -- nothing there that you wouldn't have seen on any episode of, say, Rockford Files or Magnum PI, but I enjoyed the show anyway.

:: Lance Mannion asks who our favorite TV detectives are. Mine is Andy Sipowicz from NYPDBlue, whose character growth over the show's run was always fascinating to behold. The show creaked quite a bit with age as it got older, but even so, I always loved ol'Andy.

:: My "guilty pleasure" TV cop? Why, Don Johnson's Nash Bridges, of course! I just found that show ridiculously entertaining a lot of the time. The show went on probably at least a season too long, but it was a lot of fun for a while. (In fact, with its Friday 10:00 timeslot, it made a wonderful partner with Millennium.)

Of course, watching Jodi Lyn O'Keefe blossom on the show was always pleasant: 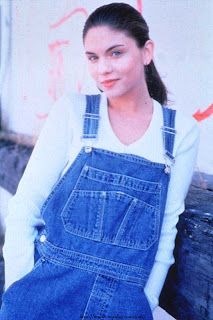 :: I will buy this. Shut up. Those movies had nice music, aside from all the pop stuff.

:: I'm often the one on various Interweb fora to interject into long threads devoted to complaining about some TV show or book or whatever along the lines of, "Geez, if you hate it so much, why do you watch it so much?" A grand example can often be found over at the FSM message boards, where one regular member is a religious fan (and I mean "religious" quite literally) of the original incarnation of Battlestar Galactica, so much so that he'll denounce with appropriate fleckling of the monitor with spittle the various plot machinations of the current version of the show. I once asked, "Why the hell are you watching something you loathe so completely?", and he replied, "So I can discuss it." I just don't get the impulse to keep dwelling on something that brings you displeasure.

So why do I keep reading For Better or For Worse, then? Hell, I dunno -- but I guess it's fun to see that plenty of folks are annoyed by it in the same way that I am. Here's a perceptive comment as to the way April is being treated in the strip:

But April is the only one of them who has a valid excuse for acting like an adolescent.

Liz had a pretty good independent life going for herself, until she suddenly and mysteriously decided that she was homesick and couldn't take it anymore. So she quit her job and asked her boyfriend -- who had already moved for her once -- to move again, and then she fled south like a scared rabbit and moved in with Mommy and Daddy at the first opportunity. And then she was surprised when her boyfriend turned out not to be so excited about the "follow Liz wherever her whim takes her" plan as she'd thought he would be.

Mike and his family had the fire, so they had a pretty good reason for moving in... but why are they still there? They've got plenty of money to find another apartment, even if they do decide that they want to start looking for a house sometime soon. But no, Mike complains that every apartment they see is too small, too far away, too expensive, too something; and he's completely terrified of the idea of buying a house. So they stay on in his parents' house, and stay, and stay...

In the meantime, April has been evicted from her room and is sleeping in the rec room -- which is also the storage space for Mike and Dee's extra stuff. Too many people are using too few showers in the house, and apparently the people who can drive -- which is pretty much everyone except April and the little kids -- can't be bothered to go grocery shopping often enough. April has been shunted off to a corner while her theoretically-adult siblings clamor for their parents' attention.

Meanwhile, their grandfather has had a stroke and April is the only one of the family who seems to visit him consistently and still treats him like a person and not a fixture.

As James notes, on the scale of things all of this isn't that huge a problem... but it is hard for a sixteen-year-old girl. What I find disgusting about the situation is that consistently, every time that April tries to suggest that this is hard for her -- every single time -- she's smacked down and told that other people have it worse than her, so shut the hell up. Mike the Literary Genius and Liz the Broken-Hearted are treated with kid gloves, because of course their problems are serious and weighty -- but April? April's problems aren't worth worrying about. Go back and hide in the rec room, April; the grown-ups are talking.

It's incredibly dismissive of her feelings, which justified or not are still her feelings. This is how you teach people that they are worthless and insignificant and that nothing they do matters. April may be a fictional character, but I'd still rather that she not learn that lesson.

And here's a great post on why Anthony is evil and must be destroyed.

:: Tomorrow morning: pancakes, bitches! We weren't successful last year, but we did get a nice consolation prize: Charlie's Diner in East Aurora, which is just a great little breakfast joint in the classic tradition.

And so it goes.

Wax on, wax off! It'll be great to have those Karate Kid scores! I kinda like the pop songs too. Is that wrong?

I just read that post about why Anthony must be destroyed. I never, ever thought of that strip as anything but real-time family stuff that was fairly stereotypical of fairy-tale America (or Canada, as it were).

Anthony always struck me as a pathetic schmuck that settled for second best and got deservedly burned for it. Elizabeth as a stupid girl that kept chasing off here and while seemingly making her own way, always running from the really hard stuff.

Mike as the usual woe-is-me writer who has a ton of talent but does everything the hardest way possible.

April's the only one that I really like in the whole family. She was the typical "accidental" kid but instead of being spoiled she's sort of being left to her own devices. And she's doing wonderfully.

As for Deanna, how long did it take her to tell her mother to f$^k off and let her run her own life? Too long, but no surprise there. THe family friend (whose name escapes me) that owns the gas and automotive place always struck me as the most probable of the supporting characters. Hard work really will get you places. Just ask the gay landscaper (why didn't they go totally sterotypical and make him an interior decorator?).

Funny, I never realized just how much I hated some of those characters. And like you mention earlier in the post, why do I spend so much time with them if they bother me so?

Having witnessed or occassionally experienced virtually all of the types of events in FBoFW, I'm inclined to give the writer a pass. The mother has been neurotic at times (recall the drama over the book store sale, e.g.), so it's understandable that her kids would come out the same way.