The basses are loaded

Apparently the long-simmering deal to bring a Bass Pro store to downtown Buffalo's waterfront has finally been brought to a boil: a deal was announced the other day for a newly-constructed complex right down by the water which will include the Bass Pro store and -- well, a whole bunch of other stuff.

I have to admit that I'm a bit conflicted here. If they build this thing as proposed, I'll yield to no one in my happiness about it. But I also will not believe it until I see actual construction being done. And when I say "construction", I mean cranes and workers and actual work being done. I add that last because I remember the hoopla in Syracuse a few years back when then-Governor Pataki showed up for the "groundbreaking" for Destiny USA, and the repeated hoopla a year or so later when a whole bunch of steel beams were delivered to the site for the "impending" construction. And guess what? That steel is still sitting there, with nary a construction person in sight.

I know, the Bass Pro project isn't remotely on the insane scale of Destiny USA, but there are other reasons to be skeptical here as well. Buffalo's history with projects like these is not encouraging, and the history with this particular project is itself particularly spotty. There was a Big Announcement like this two or three years ago, with smiling politicians and Bass Pro senior managers and architectural drawings and all that, but it all came to nothing thus far. I need to see more, folks, before I get excited.

Here's a quote from a Buffalo News story that gives me pause:

While the pact inked Friday is nonbinding — as was the memorandum of understanding the retailer signed in 2004 — this time around, Hagale said, the potential is greater and the hurdles are fewer. Shifting focus from the Aud to the Central Wharf made a key difference, according to the Bass Pro executive.

After more than three years of talking about Bass Pro, we're only on our second nonbinding pact, on which there are apparently still "hurdles" to be surmounted.

Here, by the way, is what it supposedly will look like: 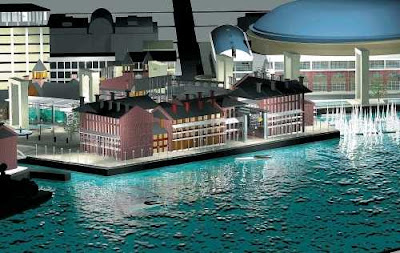 I note that they didn't put the Skyway into their rendering.

I love the way this looks, don't get me wrong. But I'm not getting excited until the Big Machines start cutting into actual earth. Over the years, Buffalo's seemingly eternal quest for waterfront development has produced lots of scenes that look like this: 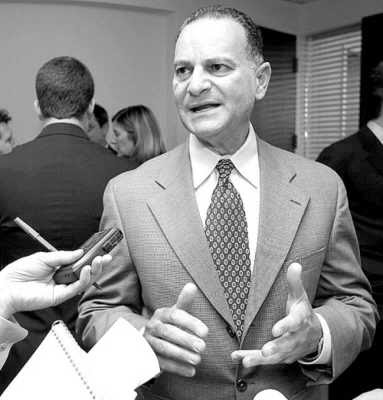 With all due respect (and hope), I'll withhold my excitement until there's a scene on the waterfront that looks like this: 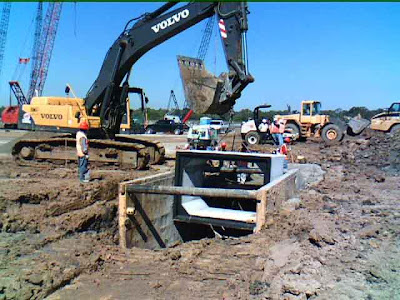 Now that will be something worth getting exited over.

scrawled here by Kelly Sedinger at 9:51 AM