I've been resisting the whole e-reader thing for quite some time, but I have now weakened. 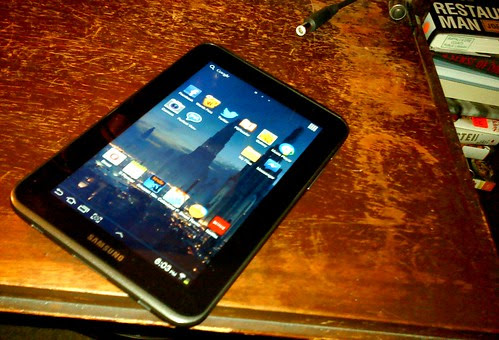 My resistance started faltering last summer when The Daughter used some collected birthday money to buy her very own Nook, which she loves. I thought it seemed pretty cool, and I knew that the trend toward e-books was gathering steam.

Then, for Christmas, I bought The Wife a Kindle Fire, which she still uses every single day. It's a great gadget, and I knew that the writing was on the wall. I decided finally that I wanted some kind of similar gizmo; the only questions were when I'd be able to afford one and which one I'd get.

I had no desire for an iPad, for both reasons of price and because I just don't want to become an Apple cultist. I also did not want a ten-inch tablet, because I find seven inches to be the preferable size for my hand. I was impressed with the Kindle Fire, but I didn't really want to be locked into the Amazon way of doing things, and I didn't really like how that device has no provisions for adding storage via a Micro-SD card. For similar reasons I didn't want a Nook Tablet. So, in doing my homework, I settled on the Samsung Galaxy 2 Tab. After saving up my money for a bit, I finally had enough to buy the thing...and it's been mine for about a month now.

And it is fantastic. I love it.

My main reason for buying it was to have my first e-reader, and for that, it's a terrific device. It came preloaded with a Kindle app, so I can use the Kindle store for e-books without actually owning an Amazon device. I also added another e-reader app for other formats; this I use for things like Project Gutenberg downloads (such as my unabridged The Count of Monte Cristo, through which I am now making slow progress).

The tab is also great for things like Facebook and Twitter, except that I cannot seem to share items on Facebook -- the 'share' button isn't even there. That's weird. And I haven't yet figured out things like cutting-and-pasting text and URLs, so I still have that to do. I also added a comics-reading app, because reading comics on the tablet is something I wanted to try. How do comics render? Well, I had to try a couple of different comics viewers before I got to the one I like the best currently (which is called 'Perfect Viewer'). Yes, reading comics on a screen this size is a bit tough, but I liken it to reading digest-sized comics when I was a kid.

I also love the tab as an audio device. I've put a lot of music on it (I added a 32GB card as soon as I bought it), and I can also stream on it from radio stations on the Web, so it's great for listening to music and stuff when I'm working on something else, like editing a manuscript.

I have little notion of using this device for writing. The onscreen keyboard works well, but I find that I have a habit of hitting the 'M' key instead of the space bar, and going back to fix errors isn't the easiest thing in the world. The thing that bugs me the most about this device? There's a touchscreen icon at the bottom for taking a screenshot. The way I tend to hold the device, I find it hard to always avoid hitting that icon and taking a screengrab.

It's kind of frustrating right now in the tech world for people like me. I'm innately inclined to buy a gadget and then use it until it dies, and the longer that is, the better. This is increasingly unrealistic, as newer and better gizmos hit the market all the time. I know people who buy the new thing and ditch it less than a year later when the new thing comes out; I know folks who upgrade their phones every few months. I have no idea how long I'll be using this tablet. I hope it's a while, though.

That's a good-looking device. I got into e-readers a while ago, when there were no tablets like yours. I chose a Sony Reader because of the exceptional battery life and light weight. Also its e-ink display is readable in sunlight. I still use it for most of my reading, but some files (PDF mostly) don't display well on it. For those, and for viewing photos and playing with the internet, I have a tablet, a 10 inch ASUS Transformer. Of course it's really too heavy to read in bed...

Welcome to the dark side.

I've had my Kindle for a couple of years now, I think. I like it and don't have a problem with Amazon. I mostly use it to download stuff from Project Gutenberg. I do wish it had a touch screen since I've got used to that on my smart-phone. Color would be nice but the e-ink display is great for reading and I wouldn't want to trade the incredible battery life for more bells and whistles.

Eh... I like cheap paperbacks where you can leave little notes in the margins and underline things. I also like the smell of real books.

I'm not sure that people are really absorbing information from a screen the same way they absorb it from something they can leaf through and take notes on.