It came from the freezer section!

OK, another frozen pizza. Sticking with the Palermo brand and their ultra-thin crust, this time I went the complete opposite way from the cheese pizza I had the first time. This time, I had a Supreme pizza.

In general, over the years, my pizza tastes have shifted from liking tons of toppings to liking only a few toppings. 'Supreme' type pizzas too often seem like overkill to me nowadays, what with lots of pizza makers seemingly approaching these pizzas as a way of cramming toppings into every possible bite. The problem then is that all the flavors just end up clashing together, and all those toppings can make the crust hard to get nicely cooked, too.

(Now, there are exceptions here – our favorite local pizza joint, Imperial Pizza, absolutely loads its pizzas with toppings, and they're frakking heavenly. I am large, I contain multitudes!) 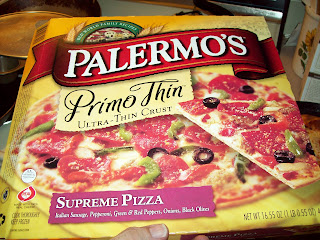 And here's the pie just out of the box, before going in the oven. 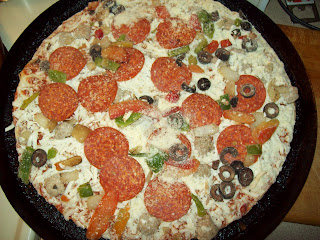 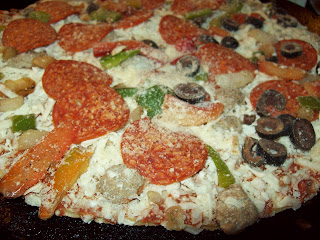 In truth, I like the way that looks. There is a variety of toppings (pepperoni, Italian sausage, onions, peppers, and black olives), but they're not so heavily piled on there that the cheese itself disappears. On that basis, this pizza looks promising. Into the oven it goes...

...and about twelve minutes later (the box recommends 10 to 15 minutes of baking), out it comes. 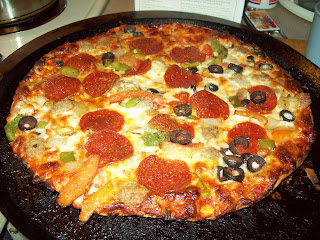 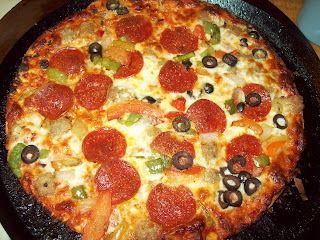 That looks...really nice. Really, really nice. The only downside here is that because toppings are taken right to the edge, a couple of those items actually fell off in the course of baking and wound up on the floor of the oven. There's a little char around the edges (could've been a little more with a few more minutes in the oven), but no real burning. The bottom of the crust, like the cheese pizza, looks great: 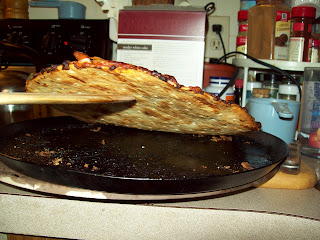 But of course, the final test is in the eating. The crust and sauce are pretty much identical to the Cheese-lovers, so I ditto those comments here. The main difference here is the toppings, so what of them? They're pretty good. Now, let's be clear here: we're talking frozen pizza, so we're not going to be getting the highest quality toppings here. But the pepperoni is pretty good, as is the sausage. The meats are a bit on the dry side, which is fairly typical for frozen pizza; the veggies are decent and taste of what they are. Not great toppings, really, but as frozen pizza goes, they're pretty good.

I liked this one.

(Why no, this series of posts isn't just an excuse I've given myself to eat frozen pizza. Why do you ask?)