I haven't been following the whole Chick-Fil-A thing much, because as far as I know, there's no Chick-Fil-A location anywhere near Casa Jaquandor.

So, apparently the founder of Chick-Fil-A is really really ruh-HEEL-ly against gay marriage. Fine. Lots of people are. But not everyone is the head of a fast food chain, so saying something strongly on one side or the other of a major issue of the day is to invite a boycott.

Of course, supporters who think that gay marriage is icky are all "Chick-Fil-A, boo-yeah!" and encouraging people to eat there. Again, fine and dandy. But then I see this on Facebook: 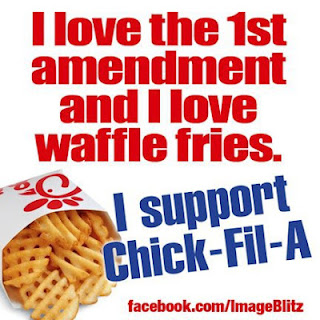 Ummm...what the hell does a boycott of Chick-Fil-A have to do with the 1st Amendment? The Amendment means that the government won't censor you. It does not give you a blanket right to say whatever you want with zero consequences. If I say things that anger people, they stop liking me. If I say things that anger The Wife, I sleep on the living room floor (we don't even own a couch). Imagine the following conversation:

HUSBAND: Why yes, that dress makes you look fat. And the color makes you look jaundiced. And your hair looks like a colony of fire ants did battle on your head with a hive of bees.

WIFE: That's it, you're on the couch tonight.

HUSBAND: But...you HAVE to let me say those things! It's my 1st Amendment right!


Any husband who would say that is being an ass on many, many grounds. So get over it, Chick-Fil-A supporters. No one is trampling on whats-his-name's 1st Amendment rights. You open your mouth, you take your chances.

(I would, however, consider eating at Chick-Fil-A's location in Nashua, NH.)

(Besides, if I want waffle fries, I can get a bag from the freezer section at The Store. I don't need some homophobic fast-food joint to get a waffle-fry fix.)

Omgosh, just saw this. Thanks for clarification.

Just got a rambling email from a relative who said he's moving to a different state because this state "is shutting down Chick-fil-a" and "violating 1rst amendment rights."

And I was like "Garp?..." And then this morning I found out that there's a bunch of people kissing in Chick-fil-a's.

So, your little post filled in the rest of the pieces for me. Gay people are being annoying and that is somehow freaking out conservatives into believing that their rights are being taken away. I understand now.