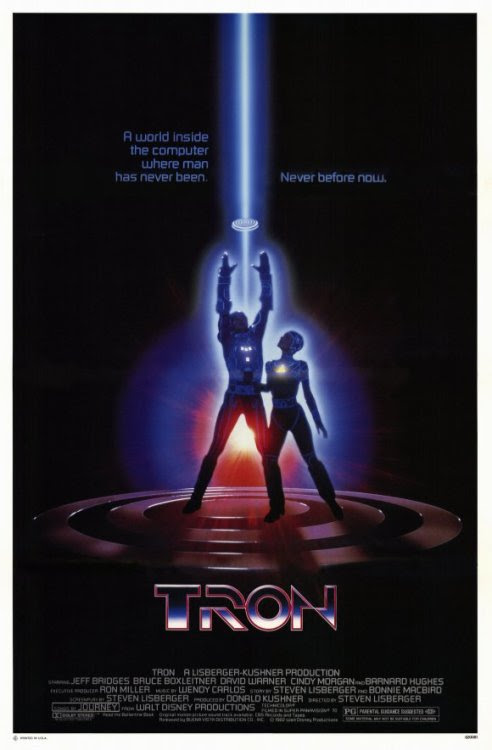 The first time I realized that there was something of a 'geek subculture' was when the movie TRON came out. The big 'tentpole' movies of geekdom -- Star Wars, Superman, The Empire Strikes Back, Raiders of the Lost Ark, ET -- everybody saw those. Not so much with TRON, which was pretty much ignored that year, except by me; I saw it and assumed that everyone else did, too. But when I mentioned it to classmates, not one of them had bothered. They had all assumed it was just a piece of, well, geek fluff.

TRON isn't a perfect movie, but it's a fun one, and it's deeply imaginative in its depiction of 'the world inside the computer', where programs take on the personalities of their 'Users'. For all the ballyhooed use of computer graphics in its effects, the film's production design is surprisingly old-school, using photographic effects of the time, but there is still a lot of amazing eye-candy in the movie. (And the lightcycle sequence is, for my money, one of the iconic action sequences of the period.)

Early in the film, a program from an accounting firm is being escorted into the Game Grid, which is where programs are gathered and forced to engage in forms of cyber-gladiator games. Here we meet Crom, a program who won't be around much, because he's doughy and nerdy and....

Crom: Look. This... is all a mistake. I'm just a compound interest program. I work at a savings and loan! I can't play these video games!

Guard: Sure you can, pal. Look like a natural athlete if I ever saw one.

Crom: Who, me? Are you kidding? No, I run out to check on T-bill rates, I get outta breath. Hey, look, you guys are gonna make my user, Mr. Henderson, very angry. He's a full-branch manager.


It interests me that belief in the Users is portrayed amongst the bad guys as a strange religion, but that's the way it had to have started, right? The Master Control Program didn't always exist. I wouldn't mind knowing the story of its rise to power...but that'll be a thought for another day. Anyway, I'm glad that over the years, TRON has been embraced more than it was back in 1982. But I'm also glad that I was on board at the beginning.

scrawled here by Kelly Sedinger at 7:47 AM

One of my long-time favorite films. I had a similar experience to yours in that I seemed to be the only one who saw this when it first came out. I wouldn't run across other fans of it until years later, college or maybe even after that. I'm pleased it's finally gotten its due, even if the latter-day fans and the makers of TRON Legacy seem to take it all way more seriously than was intended.