An awful waste of space 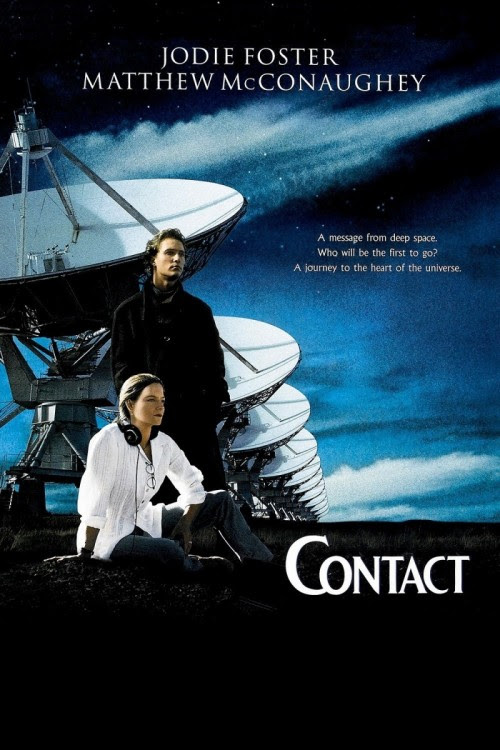 As much as I love Carl Sagan, I have to admit that I never warmed to his one and only novel, a science-fiction first contact story he called Contact. I tried reading it a couple of times, and each time I only got about a hundred pages in before I stopped. I just don't think that Sagan was really cut out for novel writing, no matter how great his gifts may have been for science writing. But in 1997, a movie adaptation of the book arrived in theaters, starring Jodie Foster and Matthew McConnaughey and directed by Robert Zemeckis. The movie was six months too late for Sagan to have seen it, alas.

I've had a somewhat uneasy relationship with Contact ever since it came out. On balance I like it a lot...but I don't love it, and in truth, I never really have. I've never been entirely successful in putting my finger on what it is about Contact that vexes me, but after recently watching the film again on NetFlix, I think I have it: the movie is too unfocused. When the film is concentrated on telling its story and attending to that central story, it is a fine, fine piece of work. But too often I get the impression that Robert Zemeckis got distracted, often by something shiny, and there are way too many times in the movie that the story gets lost so we can follow something shiny.

Contact tells the story of Ellie Arroway, an astronomer whom we meet as a young child, operating her HAM radio under the guidance of her father. They have a wall map of the United States, on which she marks her radio contacts with push pins; after talking to someone in Pensacola, Dad comments that it's her farthest contact yet. Ellie asks if a radio could talk to the Moon, or to Mars...or to her mother, who is apparently dead. Dad responds, "I don't think they'll ever make a radio that can reach that far."

Grown-up Ellie (Jodie Foster) turns out to be an astronomer, as noted, who is using her research time at the Arecibo Radio Telescope to look for, as she says, "little green men": she is dedicating her career and scientific energies to SETI (Search for Extra-Terrestrial Intelligence). This leads to her meeting a former priest (Palmer Joss, played by Matthew McConnaughey), who despite being religious and spiritual where she is not, attracts her on a number of levels, and it also leads to run-ins with an older male scientist named David Drumlin (Tom Skeritt) who is snide and condescending to Ellie as he regards her chosen field of specialty as an utter waste of time. After a number of obstacles to her career – mostly owing to funding difficulties, as convincing people to part with money for something like SETI tends to be difficult – Ellie finally has a breakthrough when, while working at the Very Large Array in New Mexico, her radio telescopes detect an unmistakable alien signal. The rest of the film follows the implications of such a discovery.

Or, rather, the rest of the film should do that, and when it does, it's incredibly effective and thought-provoking and loaded with the grand "sensawunda" of all the best science fiction. The problem with the movie is that it too often wanders into less interesting stuff, or its steps away from subtlety to drive its points home with a jackhammer, or it does things that forcibly eject me from the world of the film.

Taking the less interesting stuff first: Ellie Arroway is too often portrayed in the film as the feminine voice of reason in a crowd of over-bearing, pompous, or downright dim men. Science and engineering are male-dominated fields, and it's a well-established fact that women in those fields tend to have a tougher going just to overcome gender biases. The problem with Contact's approach isn't so much that it points this out, but that it's about other things, and thus it can't really delve too intelligently into those topics which really do deserve higher scrutiny. Thus we have Ellie being treated like an outsider on her own project, or Drumlin stepping up to claim ownership over a project he's derided consistently up until the moment it proved fruitful. Ellie is constantly on the defensive in the movie, and I think it hurts the narrative because the film can't just gear up and take us where it wants to go. Instead we have to keep talking about God.

And God is where subtlety just isn't something that interests Robert Zemeckis. Contact is full of discussions of religion versus science, but the feeling is never that anything is really being debated; what happens is that opposite sides' viewpoints are stated, and restated, and stated again. Ellie goes to a reception in Washington, where her first order of business upon approaching Palmer Joss is to immediately launch into a discussion on religion, without any preamble or preliminary; more than that, though, the script treats all such conversations – and many that aren't on the topic of religion at all – as though Ellie has a sizable axe to grind, while everyone else (just about all of whom are male) is calm and collected in their disagreement. Coupling that with the several instances in the film where Ellie is betrayed by men – Drumlin's taking of the credit, Joss's posing of a question at the hearings when he knows that the answer is going to doom Ellie's chances of being the one selected to go in 'the machine' – and the film seems to depict Ellie as someone who doesn't so much achieve a lot but whom is given things, table-scrap like, by the men in her life. It's an odd kind of feeling.

It also bothers me that the film ends right when it gets most interesting, and it feels to me like it takes the easy way out. To me, the most interesting thing is, What would human society be like once we know that we are not alone in this Universe? We may know next to nothing about who is out there, but surely knowing once and for all, without speculation, that there is someone or something living out there would be a staggering revelation for the human species. Unfortunately, the film doesn't do much with this notion – in fact, it backs away from it. We get lots of intrigue involving the contents of the message that is received from space, and then the construction of the transport "machine", and so on. And this is all very compelling and entertaining...but at the end, the film gives us the old "Did it really happen?" gambit, reducing a momentous scientific discovery to something that will appeal to some people and not to others. Not unlike, say, the belief in God.

(Again, I don't know to what degree the film's story tracks that of the novel.)

I always find that the film deflates in its last fifteen minutes or so, after Ellie returns from her journey only to learn that, so far as anyone here knows, she never went anywhere. This leads to a Congressional hearing (which really drives home the film's theme of "one woman versus a whole bunch of mean men"), at the end of which one Representative says, "Are we supposed to take your story...on faith?" And yes, he really pauses and puts big emphasis on those last two words, just in case we missed the irony of a scientist committed to objective observation being forced to admit the necessity of faith. Again, subtle, this is not. The movie does try to have it both ways by showing two government folks discussion the fact that the machine's video recorder recorded eighteen hours of static (had nothing happened at all, there would have been about two seconds' worth). But this is to be kept secret, apparently. They might as well seal all this information in a crate and store it in the warehouse next to the Ark of the Covenant.

And the movie ends, on this state of affairs. What happens now, though? Does some kind of new religion start to accrete around Ellie and her scientific beliefs? Does Ellie somehow become an evangelist for a new blossoming of a scientific worldview? Does her experience have any effect on the human tension between science and religion? We never get any suggestions or speculations. All we get is the rolling of the credits. Contact tells a good story, but it stops just as its important story is just beginning.

Finally, I just have to note that all the cameos in the movie annoy the crap out of me. This was when Robert Zemeckis had just discovered that he could put people into lots of interesting situations, digitally; remember, he'd had Forrest Gump consorting with Presidents Kennedy, Johnson, and Nixon. So here we get loads of real-life CNN personalities, and even President Bill Clinton, with the film taking quotes from actual Clinton newscasts and editing them so that it sounds like he's discussing the events of the movie. It's incredibly distracting. Instead of being drawn further into the story, I find myself trying to think of what event Clinton was actually discussing in the speeches that were repurposed for this movie. Things like having Rob Lowe play a Christian conservative leader named "Richard Rank" are incredibly distracting, because of course it makes me think of Ralph Reed. Shoehorning in mention of the mass suicide of the Heaven's Gate cult, which had happened just months before the movie came out, is another example. Zemeckis seems to want his movie to seem 'real' and relevant, but all this stuff has the exact opposite effect on me: it forces me to keep the story at arm's length.

Ultimately, I want to love Contact, because of my love and admiration for Carl Sagan, for the subject matter of the story, and for the view of the Universe as a place of wonder and of science as humanity's greatest achievement. And there really is a lot to love about Contact. But the movie spends so much time getting in its own way that I inevitably end up just admiring it a lot.
scrawled here by Kelly Sedinger at 9:00 AM

Let me say, without going point by point, that you're right about this movie. I liked it, but it hit the isolated woman thing too hard, the cameos were unnecessary, and it's generally unfocused.

This film always frustrates me. Thank you for stating why so concisely. You hit it bang on the head!

It's a movie that frustrates me but taught me about the first radio transmissions that were powerful enough to leave the Earth were the one's from Hitler's speach and Nuremberg. That fact always chilled my heart. No wonder we have no contact from beyond. They know what kind of dangerous little rats we humans really are.