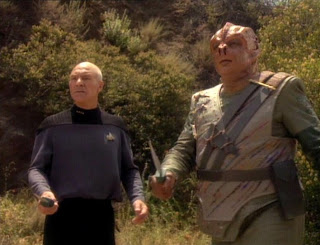 "Darmok" is one of the most memorable episodes, and for me a high point, of Star Trek: The Next Generation. The Enterprise makes contact with a people, the Tamarians, whose language has resisted all efforts at translation, to the point where not even the Universal Translator can make head nor tail of what they are saying. Their language appears to be based on random citations of stories, an extreme way of talking in metaphor and citing examples from a rich storytelling heritage to make one's point. As someone who often thinks in terms of stories I've read or seen and who frequently cites them in the case of arguing various points, this hits home for me.

In the episode, Captain Picard and Captain Dathon (of the other ship) go down to a planet surface to face a 'monster', to suffer a shared danger, which Dathon hopes will somehow forge a connection between them. It takes Picard a while to realize that Dathon's 'kidnapping' of Picard to the planet surface is intended as an act of friendship, and it takes him a bit longer to put together just what some of the Tamarian phrases mean. They do battle with the creature, and manage to fight it off...but Dathon is mortally wounded. At night, Picard and Dathon sit by a campfire. Dathon is clearly in great pain:

DATHON: Darmok and Jalad at Tanagra.

DATHON: Darmok on the ocean.

PICARD: Are you alright?

PICARD: Temba, his arms open. Give me more about Darmok on the ocean.

DATHON: Tanagra on the ocean. Darmok at Tanagra.

PICARD: At Tanagra. A country? Tanagra on the ocean. An island. Temba, his arms wide.

DATHON: Jalad on the ocean. Jalad at Tanagra.

PICARD: Jalad at Tanagra. He went to the same island as Darmok. Darmok and Jalad Tanagra.

DATHON: The beast at Tanagra.

DATHON: Darmok and Jalad on the ocean.

PICARD: They left together. Darmok and Jalad on the ocean.

DATHON: The ocean. (another spasm) Zinda! His face black, his eyes red. Callimas at Bahar.

PICARD: You hoped this would happen, didn't you? You knew there was a dangerous creature on this planet and you knew from the tale of Darmok that a danger shared might sometimes bring two people together. Darmok and Jalad at Tanagra. You and me, here, at El-Adrel.

PICARD: My turn? No, I'm not much of a story teller. Besides, you wouldn't understand. Shaka. when the walls fell. Perhaps that doesn't matter. You want to hear it anyway. There's a story, a very ancient one, from Earth. I'll try and remember it. Gilgamesh, a king. Gilgamesh, a king, at Uruk. He tormented his subjects. He made them angry. They cried out aloud, send us a companion for our king. Spare us from his madness. Enkidu, a wild man from the forest, entered the city. They fought in the temple. They fought in the street. Gilgamesh defeated Enkidu. They became great friends. Gilgamesh and Enkidu at Uruk.

PICARD: The new friends went out into the desert together, where the great bull of heaven was killing men by the hundreds. Enkidu caught the bull by the tail. Gilgamesh struck it with his sword.

PICARD: They were victorious. But Enkidu fell to the ground, struck down by the gods. And Gilgamesh wept bitter tears, saying, 'he who was my companion through adventure and hardship, is gone forever.

At this point, sadly, Dathon dies. It's a haunting moment in a terrific script, made all the better by Patrick Stewart and guest star Paul Winfield (as Dathon). It amuses me that they have Picard claim to not be a very good storyteller, and then he goes on to make even this Cliff's Notes version of the Epic of Gilgamesh riveting.

I've heard some fans over the years wonder why they never revisited the Tamarians on Trek. I'm not sure, but I do think that as good as the Trek writers were, they weren't always great science fiction writers, and to really be done well, the concept needed someone on the order of, say, a Vernor Vinge. The idea of a society whose collective memory has become so ingrained as to literally form the basis of its language is a fascinating one, and it would need to be done justice.

scrawled here by Kelly Sedinger at 7:42 AM

The epic of Gilgamesh was (and is) one of my favourite stories and as a child I was thrilled to see it pop up on ST-NG. Everyone went huh? when I mentioned it and here was Captain Picard quoting it. An early moment of geekdom for me.

I agree with you completely about that episode. It was brilliant and one of the highest points that TNG ever hit. It is a difficult concept to get across to a mass audience but the script and the acting make it work, which is an amazing thing.

And I think you're right about why they never went back. It would be very difficult to go further with the concept, keep it Star Trek and keep it accessible. It would have taken more talented writers than the show had available (and they did have some very talented writers).

Recently on Facebook I saw a faux election banner that proclaimed: "Darmok and Jelod 2012 at Tanagra" My only response to that was to shake my head and mutter: "Shaka when the walls fell".

This was one of my favorites too. It only get's better with repeating viewing and you start to pick up the language...like Shakespeare, the more you listen the more you pick up.

"THE INNER LIGHT" is IMHO the top TNG episode, but yours is a strong contender and made me think some. Great post,BTW.