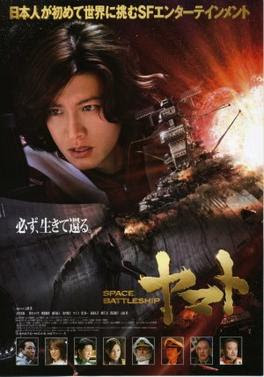 It seems that, aside from the occasional Star Trek movie, we just don't do big-screen space opera much in this country anymore. That's a shame...but at least there's Japan, who was nice enough to come up with Space Battleship Yamato in 2010. And what a movie this is. This thing scratched nearly every space opera itch I have: war against nigh-unstoppable aliens, a hero who is a discipline case and who has a history, a love story, a crusty captain, a warship that is humanity's last hope, and so on. And the warship looks like a 20th-century seagoing destroyer...made into a spaceship. You can't beat this stuff!

Space Battleship Yamato is based on a popular anime series from the 1980s, that was dubbed into English for American audiences and called Star Blazers. I never saw this, so I have no idea how faithful the movie is to the anime, but taking the movie for what it is...it's a grandly entertaining space opera epic. There's a massive alien threat to Earth, and the last-ditch effort to gain an edge featuring an enormous warship that is sent across the Galaxy; there are plucky heroes and skilled fighter pilots and talented officers with discipline problems. There's the old and grizzled captain with a history, and there's the hero who knows that things may eventually come down to him and him alone. We have desperate assaults on alien fortresses, and acts of noble self-sacrifice all the way around. And there's the warship of the title, the space battleship Yamato, which is built to look like...a seagoing battleship. Hey, why not?

In the year 2199, Earth is being ravaged under the attacks of the alien Gamilas. The last remaining battleship, the Yamato, is outfitted with a special new super-weapon and sent across the galaxy to the planet Iskandar, where they hope to learn how to counteract the lethal radiation with which the Gamilas have been rendering the surface of Earth uninhabitable. Along the way, secrets about the alien race are discovered, other secrets about the pasts of our characters are revealed, lots of space battles take place, and...well, if you think it should happen in a big-scale space opera movie, it happens here. This movie is almost the Platonic ideal of "Explodey Spaceshippy Goodness". It's well-acted, the characters are all pretty memorable, and there are only a few slow moments (and one moment that felt odd for me, as an American, when one of our Japanese heroes delivers a rousing address to the crew, citing the ship's namesake as inspirational figure). The effects are mostly quite good, and you rapidly get over any of the oddness of a starship that's built to look like a standard 20th-century battleship. I even loved the opening shot, which is an extreme closeup of someone's eyeball; the camera zooms back as the lights of blasterfire reflect from the eye, to reveal that the eye belongs to a fighter pilot who is in the midst of a major dogfight. Cool stuff.

I don't have much more to say about the film than that. But if you want to see a grand space opera movie, track this one down. It's very much worth the effort!

It looks like a battleship because it is a battleship. I don't know how much they went into in the movie, but in the series (TOS?!?) humans lived underground due to the poisoning of the Earth by the Gammalons. The Yamato, a WW2 era battleship (roughly the same size and capability as the Bismark, IIRC in real life), is reached from underneath and retrofitted while sitting on what was the seabed.

And the series is available on netflix...

One of the great, great pleasures of this movie for me was that it was quite faithful to my memories of Star Blazers, right down to the uniforms, the montage of mechanical changes that lead to the firing of Yamato's wave-motion gun, and even (as weird as this sounds) the general look of the blaster fire that comes from the big deck guns. It was in many ways the cartoon come to life, and I found myself remembering things from when I was ten that I haven't thought about in years -- including a lot of things that weren't specifically related to the show, just kind of the milieu in which I saw it, if that makes sense.

I think you'd probably like Star Blazers, Kelly. You should check it out when you get a chance...

Ahhhh! Yeah, that was lost in translation for the movie.