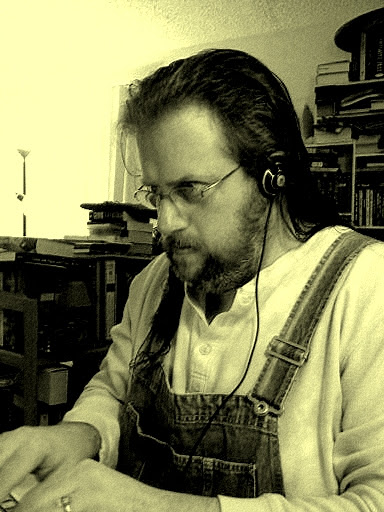 Yup, I've been pounding at the words in quantity, and to judge by the photo, I'm looking angry as I do it. Oh well. I've learned that for some reason, my neutral facial expression -- how I look when I'm not making any conscious effort to look any way at all -- is usually interpreted by outside observers as 'angry'. This annoys me, but there's naught that I can do about it save pasting a PlastiSmile on my face at all times, and I'm not about to do that. Harumph.

Where was I? Oh yeah...writing. As of yesterday morning's writing session, I had, at long last, finally reached the climax in Princesses In SPACE!!! (not the actual title). It's amazing to me the various twists and turns I've had to take to get to this point. When I started the book, I had a very rough idea of the shape of the story, which means that I knew (a) where the story was starting and (b) where the story was supposed to end. It's my experience, though, that these things always change along the way. I started off just charging full-speed ahead, but then at some point I realized that I'd missed a left turn in Albuquerque. (Seriously, Albuquerque, you have got to upgrade your street signage. You can't have everybody missing their required left turns when they get there.) This required rolling back four chapters of work. Ugh!

That was the biggest setback, but there were others too, and soon I realized that I needed to bite the bullet and actually set down some plot notes in the rough form of an outline (which I hate doing). But now, after all that, I'm at the climax, which is very much turning the same way I envisioned it way back when. This is exciting stuff. At least, it is for me.

As for the actual progress in the book, by way of numbers, here is the up-to-the-minute word count (I haven't written a word in the book yet today): 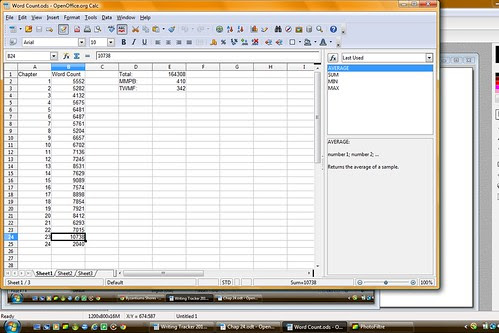 The current chapter is the Official Climactic Sequence; after that I'll have an Epilogue where some things are wrapped up and others are left there, in hopefully tantalizing fashion, for the Inevitable Sequels To Come. (Don't accuse me being unambitious: I can potentially envision a nine-book series with these characters. Space is a big place, bitches!) My oft-stated goal is for a first draft of no more than 180,000 words, and that still appears doable, as long as I don't get too wordy in these last two chapters. Then, during the editing process, I should be able to lose at least 20,000 words in tightening things up and rewrites. After that, it'll be time for...gasp...beta readers.

[Note that I have a single chapter at more than ten thousand words, which makes it rather an outlier in terms of chapter length. This bugs me, and I may try to split it in two at editing time.]

Here's another spreadsheet I made, in hopes of making it easier to hold my own feet to the writing fire. This one charts not the word count of the specific work-in-progress, but the number of words I write per day. (Only counting my fiction words here...not counting things like blog posts and Tweets and Facebook blatherings.) I started doing this almost two weeks ago, because I decided that I needed a better way of making sure that I was hitting my daily writing quota (which I have currently set at 500 words per day). Here it is: 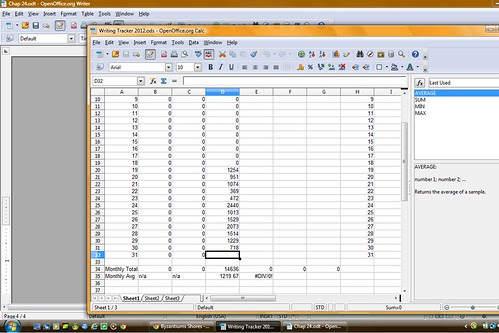 Each column is one month's work, so that's the March column with the numbers in it. I didn't start doing this until March 20; the dates are in the left-most column and are repeated at left (so I'll still be able to see the dates when I get to the second half of the year, as twelve columns are too wide to appear on the screen at once). At the bottom I keep a running monthly total, and it calculates my average output per day. I've only come in under quota twice, and most days I've exceeded it by a nice margin, and on a couple of days I've blown my quota out of the water. I like seeing that, and I don't know why I didn't do this a long time ago. Goal-setting is great, but making the goals visible or tangible is really helpful. In the past I've checked the word count of the chapter I'm working on at the end of a session and just vaguely determined that I've increased it by at least 500 words. Now I can see it.

Now, there will be days when I'm either under quota or right around it, which you can see. Those days correspond to days when The Wife is off from work, and on those days, my focus tends to be more on doing things with The Family Unit than in producing words. I'm largely fine with this. My main writing sessions still come Monday through Friday, from 6:00 am to 7:00 am. On weekends I tend to produce later at night. And so it goes. I'm bracing for an entire week of reduced output next month (because I'm taking a vacation), but you know what? I might just have this book done -- in first draft form -- before then. That amazes me. Just as month ago, I was thinking that I'd have this draft done around Memorial Day.

So there's the navel-gazing for today. Onward and upward!

scrawled here by Kelly Sedinger at 10:44 AM

You don't look angry to me. The word I'd choose is, 'intense.'