Wondering about the logistics of Darth Vader quaffing a beer? I assume he uses a straw through the grates of his mask. Or maybe he just has it in his meditation chamber, once he kicks back and takes his helmet off. Who knows...of course, I can't help thinking that maybe some of his problems in life might have been better dealt with by doing some drinking earlier on than by doing a lot of brooding and falling in with evil Chancellors and whatnot.

::  "Danny Boy" is the cliche song for St. Patrick's Day and for any gathering of Irish or Irish-minded folk, so much so that it's nearly impossible to hear a fresh take on the song. For that, we need three incomprehensible Muppets.

:: You can never go wrong with John Williams. Here he is, teamed up with The Chieftains, for the End Credits of the Irish-emigration-to-America saga, Far and Away. It's a really kind of silly movie, but I like it because it's really earnest in its silliness.

:: And finally, I am absolutely tickled that this is on YouTube at long last. The great sitcom Cheers had a recurring storyline of sorts involving the battle of pranks and stunts between the gang at Cheers and the rival bar, Gary's Old Towne Taverne. These episodes were highlights of every season, right down to the final season, when the war was finally won. Just great stuff...and my favorite was the St. Patrick's Day episode, in which the gang arrives at the bar to find that the bar itself has been enclosed behind a cinder-block wall by Gary and his cohorts. (With Woody inside, by the way.) Still, Sam decides to keep calm and carry on, especially when the Irish band he's hired shows up to work its musical magic. And then...this happens.

This scene (which I consider one of the great all-time sitcom scenes) was actually written by Ken Levine and partner David Isaacs, so Levine provides the entire script of the scene here. Just great stuff. Also of interest is that the guy playing Sean, the lead singer, is actor Maurice Roeves, who also played Colonel Munroe in 1992's The Last of the Mohicans (the Daniel Day Lewis version), and a Romulan on an episode of Star Trek: The Next Generation. According to Roeves's IMDb bio, he was born in Sunderland (in England) and considers himself a Scot!

:: Need a toast for tonight? Pick one from here. 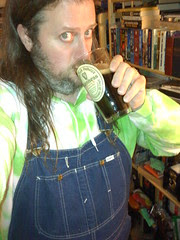 May all your souls be in Heaven a full hour afore the Devil knows ye're dead!