Page One: A Princess of Mars 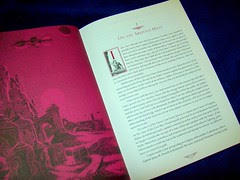 Here's Page One of one of my copies of A Princess of Mars. This copy is part of something called the "Library of Wonder". I bought it off the Bargain Books table at Barnes&Noble. Even though I already owned a copy (an omnibus I bought, in turn, back when I was a member of the SF Book of the Month Club), I couldn't resist this one. I read A Princess of Mars a while back, and I was surprised at how well the writing holds up after 100 years; I expected a pulpy work that would be difficult to read for its prolix writing, but Burroughs crafts a nice, spiffy, readable tale that doesn't have nearly as many anachronisms as one might expect. I haven't yet read any farther into the series, but I intend to. This volume contains the first three of Edgar Rice Burroughs's "Barsoom" novels, of which the first, A Princess of Mars, has just been adapted for the big-screen. Somewhat infamously, it turns out.

So, why did John Carter fail? I suspect for lots of reasons, not just one.

I've heard that there was a change in Disney management during the film's production, and William Goldman has pointed out in his books that often an incoming exec's first act of business is to make sure everything that the previous guy greenlit either gets ungreenlit or at least is just tossed out there without hype. I'm not sure about this; it's one thing to just put the brakes on developing projects, but quite another to purposely scuttle a movie that's already been made because the $200 million has already been spent. I've also heard that director Andrew Stanton was in charge of the marketing, and he made the decision to assume that audiences are more familiar with the John Carter character than they actually are. I'm not sure who was behind the decision to change the movie's title to simply John Carter, when John Carter of Mars would have been more evocative, and hell, A Princess of Mars would have been in keeping with the book on which the movie was based in the first place.

For my part? I wonder if this isn't the kind of movie that wouldn't have failed had it come out, say, twenty years ago, when movies could be allowed to be in theaters for a couple of months, when they weren't thrust into 18-screen multiplexes on as many screens as possible so as to guarantee massive opening weekends and then a couple more respectable weekends before the movie disappears from release entirely barely a month after its initial appearance. John Carter opened on a Friday, and I was reading about the movie's box office failure on the subsequent Tuesday. Four days later. That is insane.

Now, I'm not convinced that word-of-mouth can always change a movie from failure to success – remember, The Shawshank Redemption was a box office failure and word-of-mouth didn't elevate that movie to classic status that everyone's seen until it came out on video. But still, in this day and age when there are a bunch of movies coming out all the time, and when most folks in my experience only tend to go to movies once or twice a month at most (and many less than that, as the cost of moviegoing is getting to the point where it might well rival the cost of a nosebleed-section admission to an NHL game soon), they tend to only go see whatever the BIG new release is. And that, sadly, tends to be the sequel to the tentpole franchise, or the adaptation of the current favorite book, or whatever. Not a movie like John Carter, which is in turn marketed with ads that really aren't clear at all as to what the damn movie is about in the first place.

So anyway: I saw John Carter this past Saturday. For a reputed flop, there were a lot of people in the theater to see it. The place wasn't packed, but the auditorium was probably almost half-full. That's not bad, especially considering how packed the cinemas were for The Hunger Games. It's just not the case that no one wants to see this movie. It's just the case that, for whatever reason, this movie was set up to fail with unreasonable box office expectations that make the movies a sprinting horserace and an ad campaign that simply didn't get the job done.

My particular screening didn't start out so well. I attended a 2D showing, because I refuse to see 3D movies. I just can't do it. I had a headache years ago after sitting through a couple of fifteen-minute 3D flicks at DisneyWorld. And I'm certainly not paying extra for the privilege of having a headache. So 2D it was. But after the previews ended, a title card appears on the screen, accompanied by voiceover: "Please put on your 3D glasses, now!"

And yup, they started the 3D version, with the telltale doubling-up of the image that had me in mind of the Monty Python sketch with the double-vision guy planning an expedition to climb "both peaks" of Mt. Kilimanjaro. I wondered if I'd screwed up or ended up in a 3D showing by mistake, but suddenly there were a bunch of folks behind me saying "Wait, what?" and getting up and heading out to the hallway. A Cinema employee stepped in, saw the 3D movie on the screen, and said, "Uh, I gotta go upstairs." A minute or two later, the 3D version stopped, another minute or two passed, and the 2D version started. Huzzah! And they gave everyone there a free ticket to another movie, which was nice. So I get a free movie, for not that bad of an inconvenience.

(Oddly, when they restarted the movie, we had to sit through the previews again. Are they physically attached to the print of the movie you see?)

So anyway: about John Carter, the movie. Yeah, I loved it, and it depresses me that lost in all the discussion of the movie's terrible marketing and undeserved fate (which, unless the movie develops surprising legs and then goes on to a remarkable life on DVD, will rule out sequels) is the fact that John Carter is a kind of movie you don't see much anymore: a rollicking and entertaining adventure movie with high production values. The acting is good all the way around, especially the leads (Taylor Kitsch as John Carter, and Lynn Collins as Dejah Thoris). The visuals are all well-done, with none of the odd muddiness that I've noticed in movies shot for 3D. The film is full of wonderful spectacles and set-pieces, and for the most part, the plot isn't hard to follow, once it gets going. There is a prologue that really doesn't have much need to be there, and I did find the final battle scene slightly hard to follow as it ended. Also, there are a few pacing problems in the first act, as we cut away from John Carter for a bit too long to learn about Dejah Thoris and her dilemma; in my view, in these kinds of "Fish out of water" stories, it's best to stay with the fish as long as possible. Those are fairly minor quibbles, though; once the movie settles into itself, about half an hour in, it's as absorbing an escapist movie as I've seen in a long time. Michael Giacchino turns in a typically professional score, sounding a lot like his score to Star Trek 2009, and just as ear-wormy as the earlier score – I've had the main theme stuck in my head ever since.

John Carter, and the books that inspired it, aren't really space opera, but its sister genre, planetary romance. There's no space here whatsoever. Carter is teleported to Mars – Barsoom, they call it – and there's an air of steampunk over the entire movie. It feels 'retro', and that retro feel is a large part of the movie's charm.

No, John Carter is not a great movie. But it's a very good one, well made, a fine addition to its genre. It deserves to be seen and enjoyed, not dissected in some kind of half-assed postmortem on what Hollywood does wrong these days.

I'm delighted to hear you enjoyed John Carter! As to the issue of the trailers being attached to the movie, well, they would've been physically spliced to the first reel back in the old days when I was running projectors. Now that everything is digital, though, I imagine that what probably happened is that all the trailers, policy reels, and any other stuff that might precede the feature are all individual files that are linked to the movie as a "package" at some programming stage, and it's either not possible or else it's just a pain to disconnect them and play just any one file, such as the movie only. There may also be policy rules in place requiring them to be played every time the feature runs, or maybe it's a little of both.

On the other hand, John Carter did WAY better on the foreign market than The Hunger Games, so far.

Interesting...I wonder if that trend will hold. Try as I might, I can't work up any real interest in The Hunger Games, book OR movie.

That's a fine looking edition of the book.

The movie was really good and that fact seems to get lost in all the chatter. People talk about money and returns and investments and marketing with little time spent on the experience of the story. That's something we used to complain about studios and studio mentality but it seems that now even audiences have been infected by that blinkered way of thinking. American audiences seem to be anyway, if the domestic vs. international statistics are to be relied upon.

As for The Hunger Games I have little interest in the film. I tried to read the book but couldn't get past the first paragraph.