Just some stuff that's in my head:

::  Everybody hates on Mondays, but for my money, Tuesdays are far more likely to offer up a Giant Bowl of Suck. Tuesdays are just irritating. Everybody gears up for Mondays, because they're depressing by definition, but Tuesdays? They just sit there in the tall grass, waiting to ambush you. Tuesdays are the nadir of the week. You're still close enough to the previous weekend to remember whatever good times you had to see end to go back to work, and you're too far from the next weekend to take solace. Tuesdays are just nothing but grind.

::  I don't know if I'm going to bother watching the finale of Hell's Kitchen. The show is just awful, what with the continuing, and increasingly inexplicable, presence of Elise.

::  In the "Hey, that's never happened before!" department, I got blocked by someone on Flickr! This was really odd. I've never been blocked before, ever. I only noticed because I added her as a contact just the other day, and today I noticed she wasn't showing up on my Contacts page. Weird! I've been defriended on Facebook and I'm sure I've been unfollowed on Blogger, Twitter, and Tumblr, but I tend to not notice these things...I have no idea what my numbers are, in terms of followers, on any of the services that have followers in the first place. I'm kind of intrigued as to what it was about me that turned this person off; I can only assume she took a cursory look at my photostream and concluded that I'm some kind of creepy fetishist. Oh well!

::  I have zero idea of what I want for my birthday this year. And I feel like I should be taking advantage, because I'm hitting one of the Nice Round Numbers.

::  I've been consuming fruit smoothies in a big way of late. My method is this: I throw in a cup or so of ice cubes, followed by a scoop of protein powder (if I've just returned from working out, otherwise I omit the protein powder), then roughly half a cup of milk and half-to-two-thirds a cup of vanilla yogurt. Then I add fruit: usually I throw in a banana, followed either by a peach or two or a blend of berries, mostly strawberry or blueberry. Then I let the blender work its magic, and drink.

My problem, of course, is that the stuff I've been making my smoothies with will very shortly be out of season, and thus either unavailable or too expensive to keep on hand. We're heading into apple season...so, do apples make decent smoothies? I will report back once I've found out, but an apple cinnamon smoothie sounds awesome, doesn't it?

::  I'm also giving more and more thought to vegetarianism. Not as an entire lifestyle, but I'm liking the idea of going meatless one or two times a week. I am already eating several vegetarian meals each week, so doing this won't be a problem. I imagine that beans will have a major presence. I need to start reading some recipes!

::  But no, I won't be giving up meat entirely. Never! And by way of evidence, here's a recent meal I had: a pancetta, Romaine, and tomato sandwich on a sub roll: 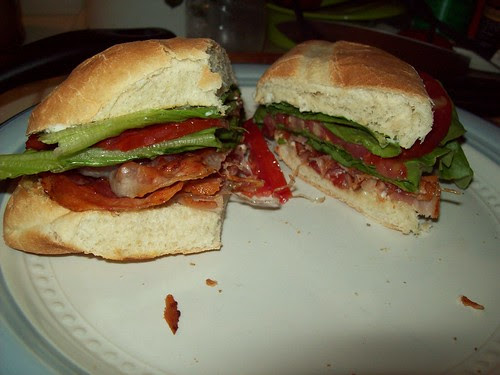 Oh, this was heavenly.

::  I have officially come around on fresh tomatoes. I love 'em now. I hated them when I was a kid, but I gradually learned to accept them on sandwiches and burgers and tomato slices on pizza. I'm not sure I'll ever sit and eat tomato slices all by themselves, but otherwise, I'm becoming tomato-obsessed. It's too bad our balcony gets so little sunlight during the summer; we can't grow any tomatoes!

::  Oh, and I discovered hummus last week. I had a hummus, tomato, and leaf lettuce sandwich for lunch one day that was amazing.

OK, that's about it for random blathering....

Tomato sandwich. Lightly toasted bread with the thinnest coat of mayo, thick slices of tomatoes that were on a vine 10 minutes ago and a little bit of salt. Whooo baby.

You're going to be 30? wow!
ok, maybe not THAT particular number.
Did I tell you I remember your birthda because it as my father's?

(tell me why) I don't like Tuesdays -
The Boomtown Rats blew it.

For my money, Wednesdays are the Day of Suq. Because they're always my longest teaching day, and I often have evening meetings after a full day's work...and even once I've survived Wednesday, there's still Thursday and Friday (and often, a half day work Saturday) to get through.

Tuesdays for me are a bit better because I have fewer classes, and my piano lesson is on Tuesday.

Welcome to my world.

I do get annoyed when someone unfollows me. I don't get it. Unfollowing just like following takes effort when you can just leave it alone and let me feel good about myself.

You don't like me? Don't visit. But also don't rub my nose in the fact you are leaving and then not tell me why. It's the hallmarks of a psychopic personality.

I lost a Mormon follower once for making jokes about 'magic underwear'. Now that person I can respect. They actually took the time to tell me why I sucked and why they would be unfollowing me.

I feel bad about that one. I lost the 'Mormons without a sense of humor about themselves' block of followers. Damn. They have big families and that would have been a goldmine in daily visits.

I like Monday. I get a lot of work for the week done on a Monday. I am useless on the weekend. I never do work. But monday is my go to day. Then it's coasting till Friday. I do like that when you teach each day DOES feel different.

I kinda hate Wednesdays. Wednesday just sits there both mocking me and ignoring the contributions I have made to the week thus far.