Is the space opera over when the fat alien lady sings? 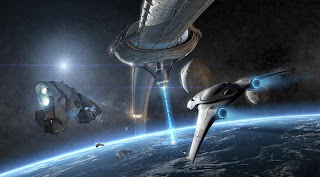 MD Jackson links this IO9 piece by Charlie Jane Anders about the fact that space opera has all but disappeared from filmed entertainment these days. It's really a shame, I think, and I hate to think its partly reflective of a general slackening of interest in space, but I think there's something to that.

Two depressing facts became apparent the other day: 1) NASA is so desperate to get people excited about space travel, they were willing to consider collaborating on the horror mockumentary Apollo 18. 2) The fall 2011 season is the first time there's been no TV show, on any network, featuring people on spaceships, since probably the mid-1980s.
What's happened to us? We haven't just lost our space shuttle program, we've lost our zest for space adventure altogether, at least in TV and movies. How can we get our love for space opera back?

How do we get it back? I have no idea, unfortunately. This is because I'm just not sure where the love of space opera initially came from. Space opera was a staple in science fiction well before rocket launches became commonplace, but did space opera as a serious going concern in mass entertainment really exist much before Star Trek or Star Wars? I'm not sure they did. I'm just glad that space opera continues to be big in SF books.

I suspect a number of factors, not the least of which is our fairly lame space program right now. But manned space travel isn't going to stop, and if private outfits like the SpaceShipX people or that crazy Virgin guy who likes to spend huge amounts of money on stuff (like spaceships) make headway, I think we may see a resurgence of interest. I remember that line in Apollo 13: "You guys have made going to the Moon about as exciting as a trip to Pittsburgh."

Now, I actually like Pittsburgh and taking trips there, but that's beside the point. One big reason that the space program hasn't done much for firing imaginations over the last batch of years is that the ships haven't been going anyplace new. The spaceships keep going to Low Earth Orbit, and the pictures they send back all look the same. The planet's always the same size, the astronauts floating in zero-grav look the same, it's all the same. Anything new is coming from the robots. Which is fine...it's great, actually...but every time a robot goes someplace new and sends back gigabytes upon gigabytes of fascinating information, it can't help but psychologically pose the question, "Why do we need spaceships at all?"

And without any real reason for people to be there, there's no real reason to tell stories about them, is there?

Another part of the problem is that imaginative storytelling in filmed entertainment seems to be the exclusive province of Fantasy these days, which again is fine, but for every fantasy flick that gets made and becomes a hit, that's a SF movie that's not getting made. Even the resurgence of interest in Star Wars, over the course of the Prequel trilogy, wasn't enough to lead to a Space Opera rebirth in film, because (a) reaction to the Prequels was mixed and (b) folks are starting to see Star Wars as mainly fantasy, anyway.

It seems to me that there is also the Hollywood "copycat" syndrome to blame for all of this. Starting in the late 1990s, the Harry Potter books exploded onto the scene, which then, in 2001, showed up as successful movies. At the same time, The Lord of the Rings arrived onscreen, and the success of both these high quality franchises really primed the fantasy pump. At the same time, the superhero movie became big doings, with Spiderman finally reaching the big screen and Batman returning. I think a part of space opera's fade in Hollywood is partly just because some other stuff came along.

Will space opera come back in a big way? Maybe, maybe not. I don't think it'll ever be gone forever, though, from filmed entertainment. And there's a big bright side here, as well: we know that Hollywood is increasingly unwilling to come up with ideas of its own. Well, when they do want to tackle space opera again, they will find a lot of space opera books waiting to be optioned and turned into movies. What will goose Hollywood into getting back in the space opera mood, however? That, unfortunately, is something I'm not sure of. It might take a space opera equivalent of Harry Potter to do it. Therefore, someone needs to write that. I wonder who might be crazy enough to give that mission a whirl....

Anyway, I don't have any major answers here...but the article is interesting. Check it out, those of you with any passing interest in SF in general or space opera in particular.

Just when I thought there would be no more space opera, then this shows up:

Okay, it's not the movie we were hoping for but... well, it's got spaceships!